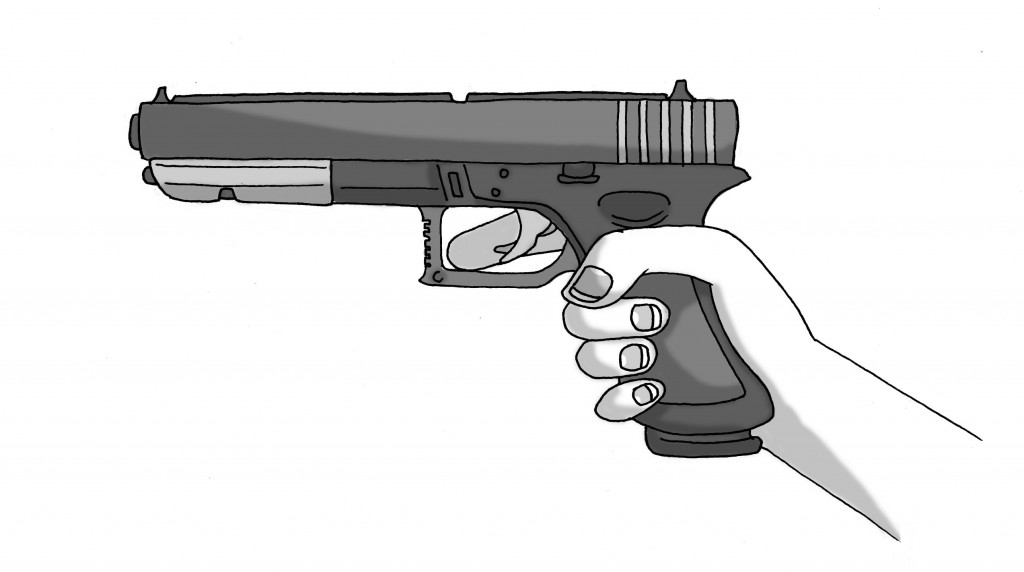 Hadiya Pendleton was an honor student at Chicago’s Dr. Martin Luther King Jr. College Preparatory High School. Early last year, Hadiya and a group of friends were hanging out in a city park after school. All of a sudden, a man ran towards her group of friends and started firing. He hit her in the back and she was pronounced dead at a local hospital. Hadiya had just returned back home from playing in her school’s marching band at President Obama’s second inauguration.

In 2013, 329 people were shot and killed in the city of Chicago. Throughout the entire United States, nearly 12,000 people were killed with guns last year.

The United States has a gun violence epidemic. Mass shootings have become a near-monthly event in our country. Each time, more and more people seem to tune it out and ignore it. It’s almost as if our country has just given up on pursuing solutions to this enormous problem because it was just too hard to fix.

Newtown was supposed to be different. In December 2012, 20 children and six adults were slaughtered at Sand Hook Elementary School in Connecticut. There was a sense of mourning in our country. How were we and our elected officials going to let those children die in vain? However, eventually as the political gridlock dragged on and huge special interest groups such as the National Rifle Association (NRA) spent millions of dollars to silence politicians, people gave up.

Groups like the NRA always blast gun control by likening it to the government going into people’s houses and ceasing their guns. In reality, what is being proposed are common sense laws that mirror those in other developed countries.

We must fix our countries’ broken background check system. About 40 percent of all guns purchased legally in the United States are purchased without a criminal background check at gun shows or on the street. We also must ban the sales and manufacturing of military-style assault weapons. These weapons serve absolutely no purpose other than for warfare and killing people and don’t belong on the streets of our major cities.

In addition to assault weapons, we must increase regulations on other types of guns. According to a study published earlier this year in Annals of Internal Medicine, simply by owning a gun increases you increase your risk of dying from suicide or murder by three times.

Gun ownership is especially a risk to children. According to a study published in the medical journal Pediatrics, nearly 10,000 children are killed or injured by guns every single year in the United States. Often these injuries happen as the result of a child finding a weapon in their household. Laws such as required a trigger lock on guns or requiring guns in the household be locked away would help to stop some injuries and deaths of children.

Common sense gun control laws such as background checks on gun purchases and bans of military-style assault weapons also have broad support of the public. According to a Washington Post-ABC News poll from last year, a full 91 percent of Americans support background checks on all gun purchases. 91 percent. Additionally, a poll by the Johns Hopkins University Bloomberg School of Public Health in January 2013 found that nearly 7 in 10 Americans support a strong ban of military-style assault weapons.

While the U.S. Congress has failed to enact strong gun control legislation, several states such as New York, Connecticut, Colorado and California have enacted many of these common sense reforms. In Washington, voters will have an opportunity to vote on I-594 which would, if passed expand background checks to cover all gun purchases.

However, gun groups such the NRA are already planning to derail efforts. I-594 has a competing initiative on the ballot, I-591 which would do the exact opposite: make it so Washington’s background check law can’t be stricter than federal law. These two ballot initiatives are already confusing voters. A recent support showed that solid majorities supported both.

It’s difficult to comprehend reasons why people would be against common sense proposals such as expanded background checks. The only reason would be that people are buying into the fear caused by groups such as the NRA. Until people stop listening to the fear-based propaganda coming from national gun groups, we won’t have these needed laws and people will continue to die.

In 1920, when Prohibition was first enacted into law as the eighteenth amendment you could see organized crime and violence rampant in the streets.

In the end, the people had had enough and wanted their right to drink alcohol as they pleased. This is why we have our Twenty First Amendment.

Today, some people say we should do the same thing with guns and our second amendment, either take them away or restrict them.

Yet, gun control does not really solve anything, all it does is give more incentive to criminals to commit more crime, just like back in the Prohibition days.

Many people’s reasoning for banning guns or assault rifles specifically is because of the amount of shooting massacre’s that have happened in the recent years.

Now, would a criminal-with the intent on shooting people- not get an assault rifle just because it was against the law? These guns will not just dissipate into the air.

Did the citizens of America stop drinking alcohol because it was illegal during prohibition? Didn’t organized crime begin to rise because of prohibition- would that not happen with guns?

It actually has been in cities like Detroit, Chicago, and Washington D.C. These cities have some of the highest murder rates in the country and at the same time have some of the most restrictive gun laws.

The study also goes on to say how Norway is a perfect example of this; in Western Europe it has the most gun ownership and has the lowest murder rate. Holland on the other hand has the highest restrictions with guns and almost the worst murder rate.

If guns were banned, whether it is assault rifles or handguns, it would affect businesses that manufacture such products and would most likely result in layoffs or the destruction of the business. In a time where our economy is still not at it’s strongest, why would we want to take away more jobs in a particular industry?

Why would it be any different for guns if they were illegal?

In urban areas you see gangs with Uzi’s, AK-47’s, and other assault rifles and machine guns. Do you think they went up to the store and bought those or stole them? Banning those guns would just give them more of an incentive to do so, equaling more crime.

The guns most people are afraid of are the assault rifles. Our Vice President, Joe Biden believes there is no need for assault rifles. As the Huffington Post reports he said during a press interview,

Yet, a few months later in at the Washington D.C. Navy Yard, there happened to be a shooting with a shotgun, killing 12.

So it would not just be assault rifles it is guns in general that we would have to hypothetically ban.

The only way to get the guns out of criminals and law abiding citizens hands through a law, would be to confiscate those guns and have them under government control. Now, that would be an infringement on our second amendment rights.

Which guns would we pick and choose to be banned and which ones to be allowed if they all have been shown to be involved in shootings? If we had no access to guns how could we defend ourselves from criminals or tyranny?

In China, on March 3, 2014, there was a mass stabbing killing twenty nine people and injured one hundred and forty. This happened in one of the most gun restrictive countries in the world.

That massacre happened without a gun, this shows that guns are not the defining factor in these tragic massacres. The two factors are humans and mental health. Mentally unstable individuals already can’t get guns legally. Mentally unstable people will always be here and if they are hell bent on shooting up a school, then they will steal if the guns aren’t readily available.

The variable between a law-abiding gun owner and a criminal is most of the time the mental health factor- not the gun.

To counter the problem of public shootings, we could arm or put a police force around our public buildings- like schools, to ensure that the authorities will always be there if anything were to happen. This is because protecting our mentally unstable and protecting people from the dangerous mentally unstable is something banning guns will not solve.

In our state we are tackling this whole issue head on with Initiative 594 and 591. I-594 brings stricter universal background checks even for gun shows and online buying if the guns.

I-591 on the other hand, keeps the state from making anymore redundant laws restricting gun sales past the federal limit.

The supererogatory nature of the I-594 can be explained through common sense. If one with the intent of committing a crime goes to a gun show with an extensive, long, and universal background check, they will end up not wanting to wait that long. In the end they will result in an easier method to obtain the gun.

I-591 lessens the strain on law abiding citizens and thus gives us time to focus on the real problems, like mental health and crime.

One compromise we could have on this whole debacle is to have guns (specifically rifles) not restricted from anyone, yet to have each rifle registered. This would filter out the criminals having those guns if they get caught, yet let the law-abiding citizens are able to keep theirs.

Gun control cannot be the answer and there may not even be an answer to this discord, but when the government takes things away from the people, it always ends up bad for everyone.

As Benjamin Franklin said: “They that can give up essential liberty to obtain a little temporary security deserves neither liberty nor safety.”