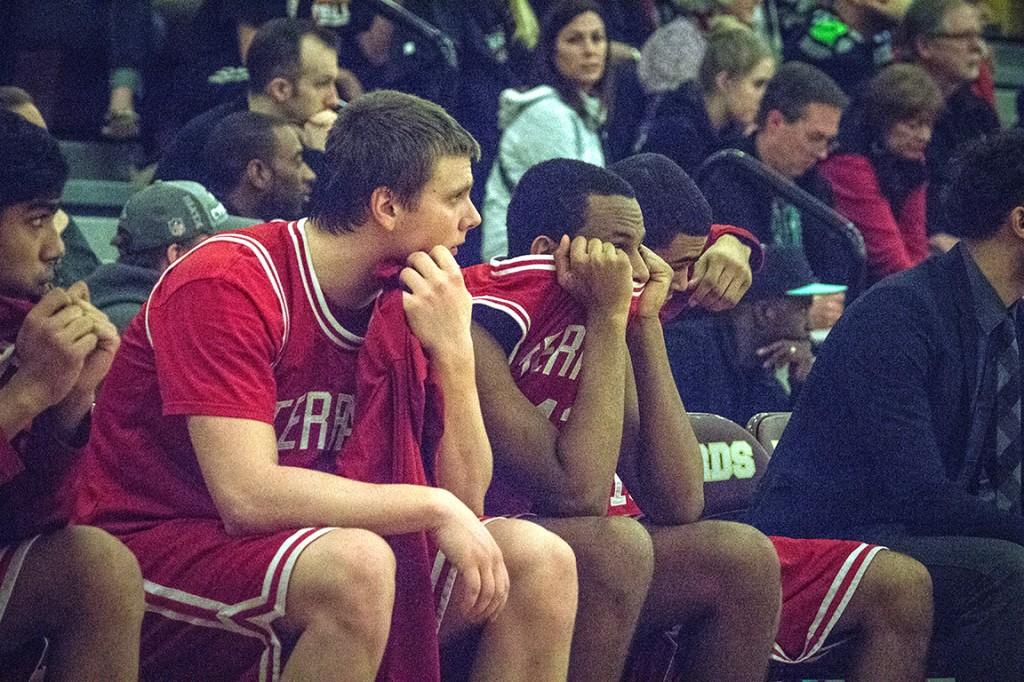 As it became clear the Hawks would run out of time for a come-back, senior posts Loren LaCasse (left) and Yoel Tekle watch from the Mountlake Terrace bench. The Wilson Rams defeated the Hawks 58-38 at Mount Tahoma High School.

The Hawks season ended Saturday night, losing 58-38 to Wilson High School in the first round of the WIAA 3A State Basketball Tourney. The Hawks kept it close, but Wilson pulled away in the 4th quarter before a packed crowd at Mount Tahoma High School in Tacoma.

Wilson will now move on to play in the Hardwood Classic in the Tacoma Dome against an opponent to be determined in Sunday’s draw.

The Hawks were able to keep it close during the first half, but Wilson eventually pulled away in the second half and never trailed after halftime. The game, in fact, was low-scoring on both sides, which is very unusual for Wilson, because throughout the season, they were a consistently high-scoring team. Credit the Hawks defense for stymieing  the Rams potent offense – particularly in the first half.

In the first half, another major factor was fouls. Senior post Loren LaCasse got two fouls in the first quarter and a third by the end of the half. LaCasse could not play as aggressively due to getting his “rhythm disrupted due to foul trouble,” coach Nalin Sood said after the game. LaCasse also didn’t play as much time as the Hawks needed him,  scoring just 4 points, because of his foul trouble. LaCasse eventually fouled out in the 4th quarter.

Wilson also had foul trouble, earning themselves 11 team fouls in the first half. However, it was spread out more amongst their players. By the end of the second half, both teams were in the double bonus.

On top of fouls, turnovers were a tremendous problem for the Hawks, who had 20 by the end of the game. Most of the turnovers were due to the full-court press defense that Wilson played. The Hawks have had trouble against the press all season long, and they were just not ready for it tonight. The press slowed down the offense dramatically and made it hard for the Hawks to compete with this quick and explosive team.

“Our goal is 12 [turnovers], so if you cut that in half, maybe if we only had 16, that’s 4 more shots, 8 more points. If you take some points away from them, it makes it a little bit more of a ball game,” Sood said. Turnovers were definitely a huge key part in the Hawks loss as they often came at inopportune times and led to points for the Rams.

The Hawks really had an amazing season, losing just eight games. Albeit tonight wasn’t a night to celebrate, it was an end to a great year with a great group of players. For seniors Yonnas Tewolde (guard), Greg Bowman (post), Yoel Tekle (post) and LaCasse, it was their last game as Hawks. Losing them is going to be a huge hit to the Mountlake Terrace basketball program.

However, even though losing those four players will surely be a blow, Sood doesn’t seem to be too phased by it. When asked about looking ahead to next season, he said, “Well, you look ahead all season. You’re developing guys, you’re working guys, you bring guys up for the varsity playoffs, so we’ve already started to do that a little bit.”

Mountlake Terrace finishes with a 17-8 record.