HAWKEYEWITNESS: My unforgettable experience in DC 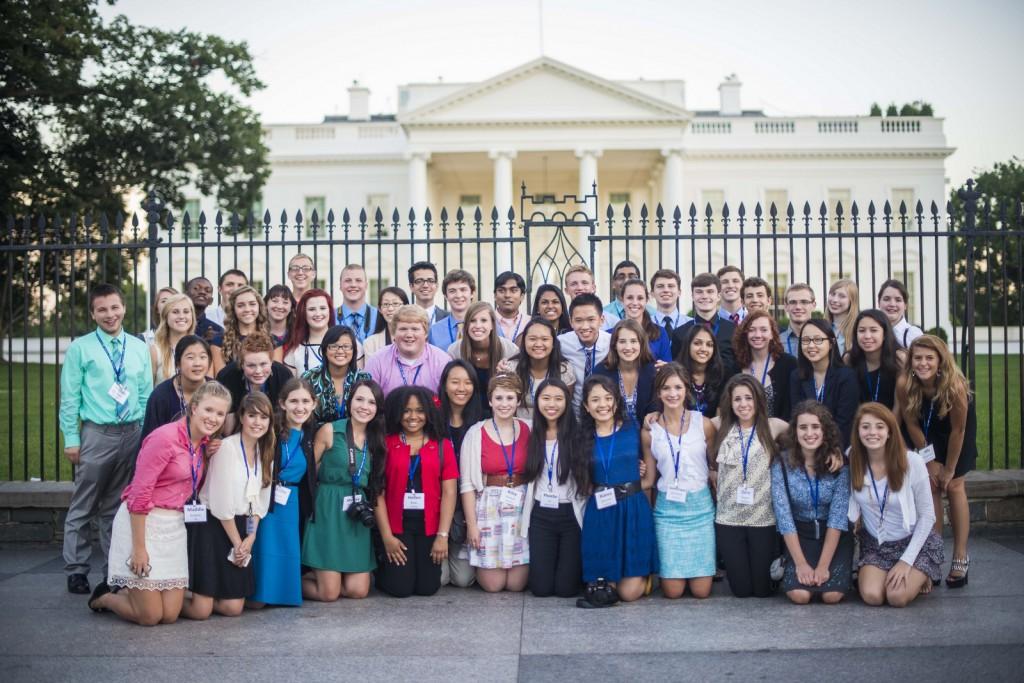 All of the delegates of the 2013 Al Neuharth Free Spirit and Journalism Conference in front of the White House.

The Al Neuharth Free Spirit and Journalism Conference was founded in part by Al Neuharth, the founder of USA Today. Neuharth was a true free spirit and innovator who created one of the largest daily newspapers in the country.

I woke up early the morning of my flight knowing that by the end of that day I would be in our nation’s capital. I got to the airport and boarded a plane across the country for the first time by myself. When my plane landed, I found the person from my program and another delegate from California, Lexy Brown. We began the drive into our nation’s capital for what would certainly be a memorable week.

Lexy and I were two of the last Free Spirits to arrive. It was dinnertime at the Hard Rock Café and we both walked around and introduced ourselves to the other delegates. Afterwards, we took a charter bus to the Newseum where we would spend much of the week. All of the Free Spirit delegates introduced themselves and their state and which First Amendment freedom was most important to them. I chose the Freedom of Speech because it is the basis of the other freedoms and without it we wouldn’t have the freedom of the press, of religion, to peaceably assemble or to petition the government. Afterwards, we played a TV-style game of trivia about the first amendment in a real television studio.

The next day, we got up bright and early to watch a taping of NBC’s “Meet the Press.” We had a nice discussion with its moderator, David Gregory about his job and about journalism in our country. We then went back to the Newseum for a class about the use of mobile media for journalists from one of my favorite people on Earth, Val Hoeppner. After lunch, we were taken to the USA Today headquarters and given a tour of their entire newsroom and had conversations with several editors and writers. After that, back at the Newseum we were introduced through video to Al Neuharth, the namesake of the Free Spirit program. We also had the opportunity to speak with his daughter, Jan and his grandchildren Dani and AJ about all of his accomplishments and what he thought a Free Spirit was. In the evening, we visited the beautiful memorials for Thomas Jefferson, Franklin Roosevelt, and Martin Luther King Jr.

When I woke up the next day, I knew that I would be in for another action packed day as a Free Spirit delegate. First thing after breakfast, we went to speak with Sara Ganim of CNN via Skype who had broken the Jerry Sandusky scandal wide open in 2011. After that, we spoke with Val Hoeppner again about mobile technology then we had lunch with the anchor of PBS Newshour, Judy Woodruff. We had the opportunity to ask Ms. Woodruff questions ranging from her career to what she thought of the current state of journalism. Afterwards, we spent hours touring the many floors of the Newseum. It is a huge museum on Pennsylvania Avenue just blocks from the Capitol building dedicated to news. We looked at exhibits like one on 9/11 and the Berlin Wall and got to real artifacts like the Unabomber’s Cabin. That evening, we had dinner and a dance on a boat on the Potomac River.

The next morning, we boarded the charter bus for the White House and took a group picture. It was such an awe-inspiring moment to stand in front of the White House gates and to view such an important and historic building so up close and personal. Back at the Newseum, we met former White House Press Secretary, Ron Nessen who served under the Ford Administration. We then had a very interesting discussion about political reporting with Susan Page of USA Today, Carl Leubsdorf of Dallas Morning News and Bill Nichols of Politico. We then participated in a mock trial about student’s rights and learned about the Hazelwood v. Khulmeier decision a federal courthouse. That evening, we listened to “Freedom Sings,” a group of singers who freely sing songs that have been censored or banned and went on another tour of monuments including the Korean War Memorial and Lincoln Memorial.

The final full day of the conference, we left the hotel early and headed for the U.S. Capitol building. We had a complete tour of the building and got to go behind the scenes to where many of the Capitol Hill-based journalists do their jobs. We also got to sit in the galleries of the House and the Senate. We got to see the Senators debate an amendment relating to tariffs. Back at the Newseum, we met with Zeke Miller from TIME magazine and got to have lunch with two Freedom Riders, Dr. Rip Patton and John Sigenthaler. Afterwards, we had a group discussion about finding a career in journalism after college. Later that afternoon, we had our graduation ceremony as Free Spirits. We heard from Mr. Al Neuharth through video one last time who encouraged us to dream, dare and do.

After some time to say goodbye to the rest of the Free Spirits, we all said goodbye and departed back to our home states. I left feeling a new determination for journalism and with a feeling that my possibilities were limitless.