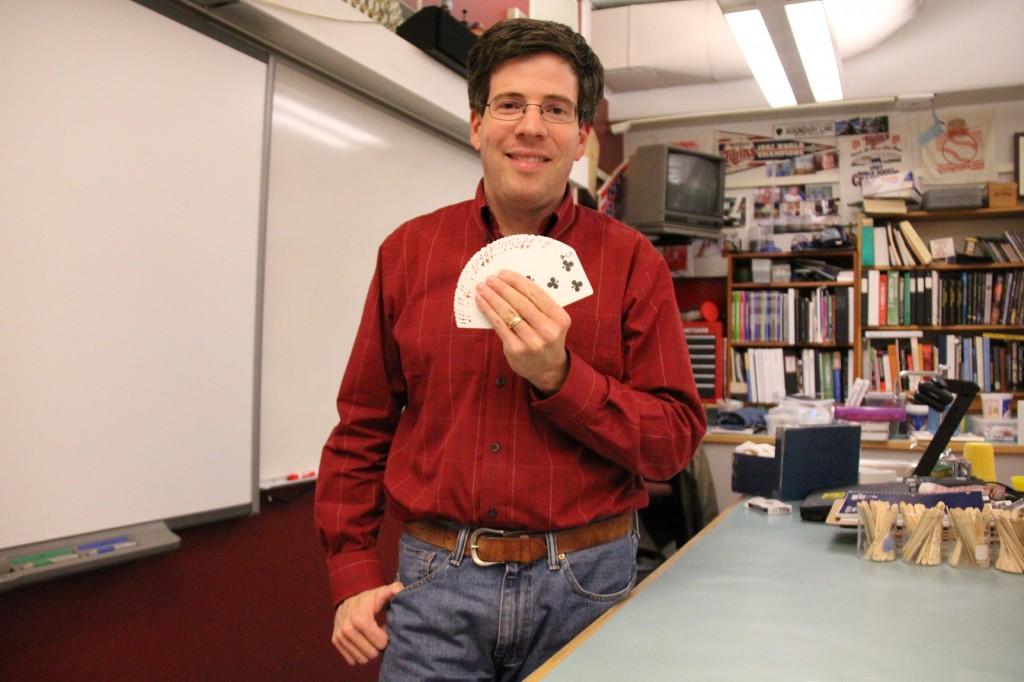 An interview with the Magic Man

Substitutes are often disregarded as clueless, confused and lost. Classes with a sub can be unproductive and chaotic. However, Tom Boland has truly mastered substitute teaching, as if it were an art form. He takes command of a class in less than an hour using another art form: magic.

He starts class just like any other ‘sub’. He calls out each student’s name, announces the day’s agenda and passes out the worksheets or whatever else the teacher has left to occupy students for an hour. However, he then adds a special surprise, telling students that if they get everything done, they can see something special at the end of class.

That thing: tricks Boland has mastered that make you question all you’ve come to believe.

You may know him as Mr. Boland or as Mr. B. Maybe you don’t know his real name at all. However, substitute teacher Tom Boland is known universally as “the MagicMan.”

A Tale of Two Passions

When Boland graduated from the University of Washington, he had degrees in education and English, plus a passion for magic. Teaching and magic were, and still are today, his greatest interests.

Boland said he knew the expectations students had for substitute teachers before he began subbing. “As a substitute I know that students like to have fun in class, more than usual, so I figured we might as well make it controlled fun.”

This “controlled fun” is a library of routines Boland performs many times per day. From rope, to card, to bunny and other tricks, students work hard for the period, in order to earn the excitement of a Magic Man routine.

Boland said he thought introducing magic into the classroom would make the day a bit more productive and a bit more bearable for everyone.

“[Magic at the end of class] might not only be a little more fun than standing up there and making them do worksheets, but also it was an enticement for working harder,” Boland said.

Like many professions and interests, both teaching and magic have been described as art forms. When done well, both are beautiful. Both take a skillful artist to show their true benefits. But Boland said teaching and magic are artistic in opposite ways.

“Magic and teaching are opposites in a lot of ways, but they also have some connections. Teaching, quite often, is centered on giving students answers, or at least leading them to the answer, giving them more information about a topic. Magic is the opposite of that. Magic gives you a question, but no answer, if it’s done well. You walk out, in some ways, with less information than when you started,” Boland said.

“So it’s kind of a neat contrast to put that in a classroom, where not everything is explained, not all answers are provided. You’re left with a question mark. But a very fun question mark, hopefully.”

Boland said one of the greatest joys about his job is that ability to puzzle, to astonish and to instill wonder.

Albert Einstein once said, ““The most beautiful thing we can experience is the mysterious. It is the source of all true art and science.”

That ability to allow students to experience that mysterious is something Boland said he loves about his job.

“Paraphrasing Einstein, one of the most marvelous things we can experience is wonder. Magic is certainly a vehicle for getting people to experience wonder, something that they’re not familiar with…something they haven’t ever seen before in their entire lives,” Boland said.

Performing his first trick when he was just six years-old, Boland described magic as being, “A serious hobby [his] whole life.”

When asked where he was from, Boland answered, “Mars, hence the magic.” His sarcastic, witty and often intentionally corny sense of humor is what makes Boland as enjoyable as a substitute as he is. Above everything, he likes to have fun and entertain. Nothing could better reflect this than his teaching style.

He really grew up in Olympia, WA, before moving to Seattle to attend the University of Washington. His success and passion for magic began when he was young. Boland won his sixth grade talent show after performing his magic act in front of the school.

“When I was in sixth grade I entered the school talent show and did not know what I was getting myself into,” Boland said. That talent show many years ago ignited Boland’s curiosity and passion for magic. He began just like any other magic newcomer, learning coin, card and sleight of hand tricks, similar to those he has developed into his signature act today.

As a kid, Boland said he was greatly influenced by magicians such as “Dr. Mystical.” As he grew older, he worked with famous magicians on how he could improve his craft.

“I’ve been taught by some of the best magicians in the United States. Their influence has definitely rubbed off on me,” Boland said.

Graduating from the UW with degrees in English and education, Boland began working for the Edmonds School District, and has continued substitute teaching since. “I think it’s fun. It’s nice to be known for something…positive,” Boland said, laughing.

I haven’t really made any money but I enjoy doing it. It’s something I work on a little every day.”

Boland has been substitute teaching at MTHS for 10 years now, spending those 10 years nearly exclusively at MTHS. He said Terrace is a school he knows and loves, and keeps coming back to.

“I spend most of my time at Mountlake Terrace. It’s my favorite school. I enjoy coming here. I enjoy working with the teachers and the staff and the students. It’s just a fun place to be.” He spends some time at Edmonds Woodway High School, but he said he spends much more time here at Terrace. But Boland hopes to “settle down,” so to speak, and get a full time classroom.

“I have been looking at getting a full time classroom. So, the subbing gig may come to an end.”  To substitute teachers that will one day fill Boland’s very large shoes, he offers genuine advice.

But for Boland, some things will never change. With a grin stretching across his entire face, Boland said, “I’ll always be working on magic. There’s no question there.”