Kristjanson and the Hawks rise over Seagulls, 4-1 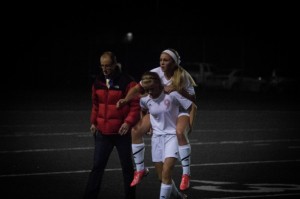 With 18 minutes left in the first half, senior Maddy Kristjanson knocked in the first goal of the night to give Terrace a 1-0 lead.

However, shortly after, Kristjanson would get hurt. Fellow senior, Nikkie Fro would have to carry Kristjanson off the field, due to Kristjanson not being able to get off under her own power.

With the first half winding down, the Seagulls would sneak a shot just past senior goalkeeper, Amanda Aversano, tying the game up 1-1.

Kristjanson would begin to warm up on the sidelines during the end of the first half. She ended up returning to the game at the start of the second half.

The Hawks continued where they left off, with junior Riley Zucker scoring two minutes into the half to give the Hawks a 2-1 lead.

As the game went on, it may have gotten colder, but the Hawks stayed hot.

Kristjanson would kick a booming shot from 30 yards out, the Hawks now leading 3-1.

The senior wasn’t done yet. With five minutes left in the game, Kristjanson would complete the hat trick, knocking in the final goal off of a corner kick.

When asked how he felt about the win, Terrace head coach Evan Hatch said, “It felt really good to win decisively. I think we needed that to feel like we belong in the top of the league.”

“Maddy Kristjanson came through for us tonight with a hat trick, three goals and that was fitting since this is our last home game at Edmonds stadium,” Hatch, said.

“We definitely need the weekend to recuperate from injuries. We have two tough road games next week,” Hatch said.

The next game is Tuesday, Oct 8 against Stanwood at Stanwood High School, 6:30 p.m.