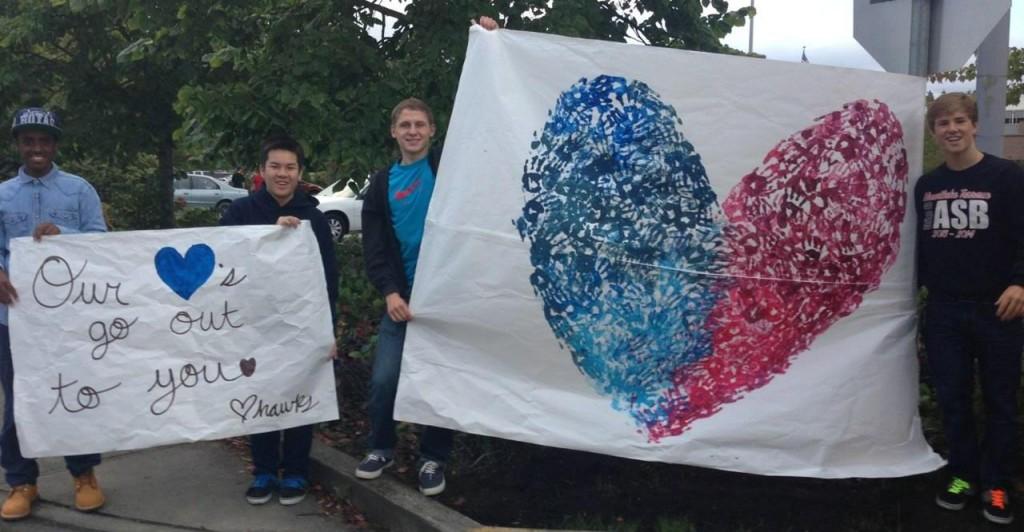 After the death of Meadowdale High School student Matthew Truax, 16, during school last Friday, many Hawks have been showing support for the students, staff and families of MHS.

Some of the posters created by ASB members Sunday read: “Stay Strong Meadowdale -Terrace” and “Hawks <3 Mavs” along with a large heart poster made of red and blue handprints, the school colors of MTHS and MHS. The posters were then posted inside the MHS gymnasium.

“A lot of the students were saying thank you and that it meant a lot,” ASB Secertary Liya Ewing said. “You could really see that we really helped them and showed them that they’re not alone going through this.”

“We just wanted to do this out of the goodness of our hearts,” Ewing added.

During tonight’s Hawks Women’s Soccer game, members of the team painted blue hearts on their faces in honor of Truax’s death.

According to Lynnwood Today, Truax collapsed during a third period physical education class. After attempts were made to revive Truax, paramedics then responded and he was taken to Swedish/Edmonds Hospital.

The Snohomish County Medical Examiner’s office determined the cause of Truax’s death to be hypertrophic cardiomyopathy, as reported by Lynnwood Today.

Hypertrophic cardiomyopathy is a condition in which the heart muscle becomes abnormally thick, according to the National Institute of Health. The NIH also states that some patients may have no symptoms but in young patients the first symptom is many times sudden collapse and possible death.