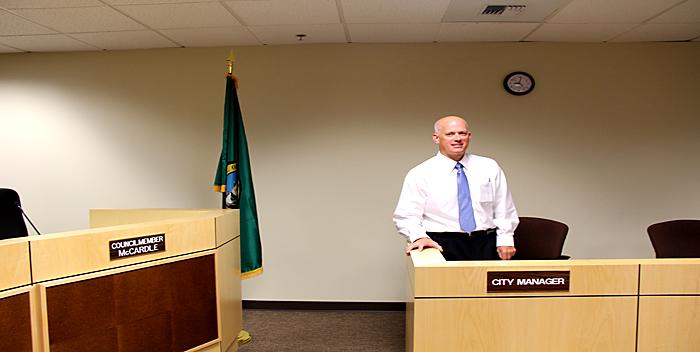 Caulfield was the City Manager for just under eight years. In this time, he was “very proactive in terms of reaching out to the community and interacting with the City Council and his employees,” according to Hugill, who worked with Caulfield since the latter started working for the city in 2005.

As City Manager, Caulfield influenced the City Council to look at more long term goals for the community. He also trained department directors, especially in what is important to reach the City Council’s goals.

“While I will miss [Caulfield], I know that we’re going to be able to carry forward the work that he’s done. He has laid down a great foundation for us,” Hugill said.

After Lakewood’s previous City Manager announced that he was leaving last December, Caulfield made the decision to apply for the job in late January. Caulfield has lived in Pierce and South King County for most of his adult life, so he is looking forward to having something of a homecoming in his transfer to that part of Washington. However, that is not the main reason for his resignation and acceptance of a new position.

“It’s not like I was looking for a new job, but the fact is that the opportunities that exist down in Lakewood were too good to bypass,” Caulfield claimed.

The Interim City Manager will be filling in for about four months while the City Council finds a replacement. Hugill has spent time as a city administrator in the past, as well as the Interim City Manager in 2005 before Caulfield was hired. Also, the city has a, “High level of trust in Mr. Hugill to be able to hold things together and keep things moving forward,” according to Caulfield. However, Hugill will not be applying to fill the position of City Manager because his priorities lie with family.

“Sometimes in your life, you want to see if you can still do something, how well you can do it, and if you still have what it takes to put in the hours. And this is that opportunity [for me]. Being able to return to that challenge and work with the City Council, the community and the employees in that capacity is something I look forward to doing for a short period of time,” explained Hugill, who was appointed to the position on Aug. 19.

In order to find a new City Manager, the City Council must first select a firm to do the recruitment on their behalf. The top recruits would be interviewed around November or December of this year, and a new manager could hypothetically be in place sometime in January.

In the midst of this recruitment, the City Council will continue with their ongoing activities, such as the Main Street Project, Lakeview Trail, large-scale storm water project and park improvements.