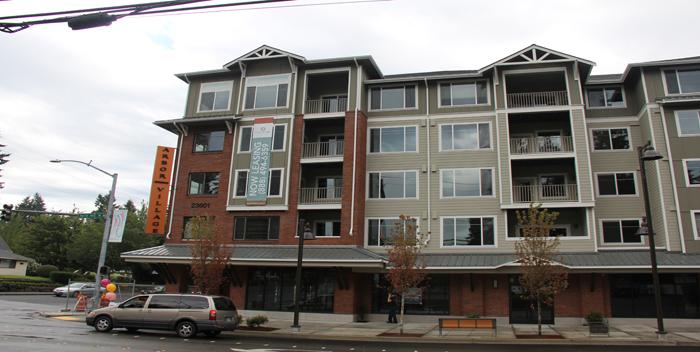 Mountlake Terrace’s Town Center project continued with the grand opening of the Arbor Village mixed use building on Aug. 23. The building is located at the corner of 56th Avenue, which is becoming the new “Main Street,” and 236th Street SW, right in the midst of the other improvements being made in MLT for the Town Center project.

The five-story Arbor Village building features both apartments and business space, including a spot for a restaurant. There are two levels of underground parking as well as wider sidewalks for residential accommodation.

Pre-rent for the apartment section of the building began at the end of May, and now the rooms are about 40 percent occupied. According to Assistant Manager Max Lyashenko, the goal is to have the apartments stabilized by November. Lyashenko said that once the apartments are filled, businesses would be more willing to rent out space in the building.

“Location is a gamble for businesses,” Lyashenko said. “They want to see how it works out with the apartments before they decide to rent with us.”

Because of this, there isn’t much of an idea of the different businesses that will be occupying Arbor Village. However, there is a beauty salon already in the contracting process and two other known prospective businesses, a deli and a daycare.

This building was only step one to a multiphase project, not only for the city, but also for AFCO and Sons, LLC, the company that opened Arbor Village. While MLT is working on bringing in businesses and expanding the Town Center, the company is looking forward to installing multiple Arbor Villages into the city, according to Lyashenko.

In its expansion, Mountlake Terrace is hoping to raise the overall demographic of its economy. Though MLT is financially stable, it is a fairly small city and “needs more business for a larger economy,” Lyashenko said. With the introduction of Arbor Village as well as other businesses and projects in the area, MLT continues to grow.