Track tops out of state 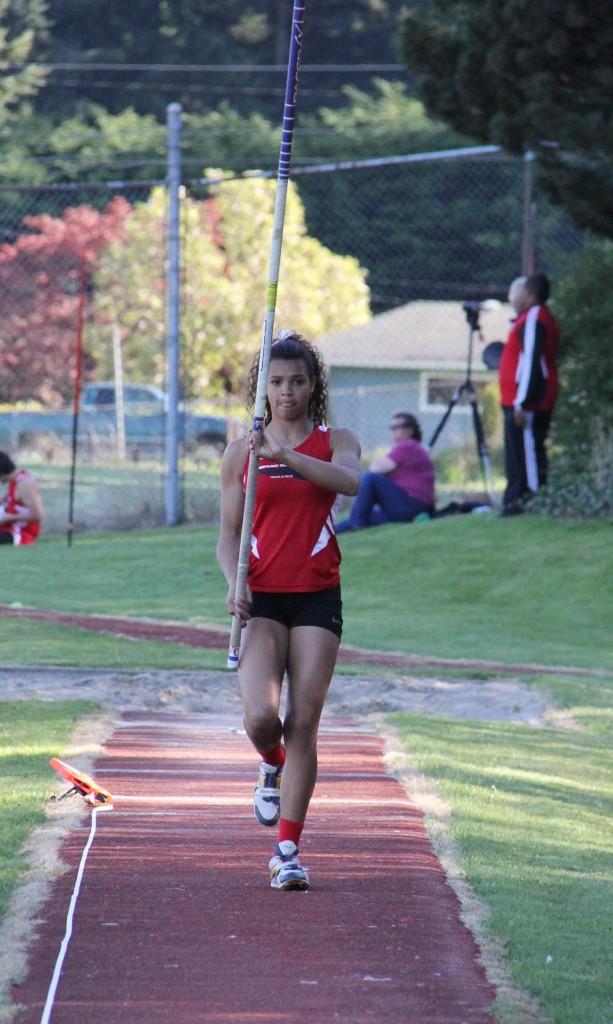 Luke Thurber | Hawkeye Freshman Chinne Okoronkwo prepares to compete in the pole vault competition at the Edmonds School District meet on May 3. " />

Luke Thurber | Hawkeye Freshman Chinne Okoronkwo prepares to compete in the pole vault competition at the Edmonds School District meet on May 3.

This year’s track team not only lived up to the precedent created by last year’s success, but likely surpassed it as well.

At the WIAA 3A Track championships, the Hawks continued their season long triumphant tendencies.

Chinne Okoronkwo, freshman, and her brother Gifton Okoronkwo, senior, continued their season-long dominance in the triple jump, with both siblings claiming the state championship in the event. Gifton made a stellar jump of 46’ 7.25”, a whole foot further than the second place competitor. Chinne also easily won with a jump of 40’.  Chinne also finished second in pole vault and sixth in long jump, despite a hamstring injury.

Gifton, Quinnell Mason, Joshua Kim, and Duane Dahl, all seniors, also competed in the 4×100 relay, finishing second in the state with a time of 42.85 seconds.

Dahl also competed in the 300 meter hurdles, finishing ninth and a time of 40.48 seconds.

Beau Kennedy, senior,  made his second straight trip for the javelin, and just like last season, he finished eighth with a solid throw of 173’9”.

Before heading to the state championships, the men’s Hawks track team easily defeated the competition, completing the regular season with an undefeated record and winning the 3A Wesco track championship with a team score of 131.5 points, more than 20 points ahead of second place Shorecrest.

The women’s track team had a much different season, winning only 2 matches, but averaging 74.3 points per meet. Behind Hunt, Okoronkwo, and Hailee Malins, a freshman, being the only female underclassmen to qualify in state this season.

Despite Malins failing to place in the top ten at state this season for shot put (she placed 12th), she is still just a freshman with a personal record of 36’ 0.75”.

Other competitors at the state meet were Yohans Tewolde who came in 16th in the 800 meters and 14th in the 4×400 Relay along with Mason, Kim, and Dahl.

Bryan Wyss participated in the wheelchair Javelin event, coming in third, and Tye Esparza, came in eighth place in the Triple Jump behind teammate and champion Okoronkwo.

Also competing at the state competition was junior Jack Pearce who came in 13th in the 3200 meters.

Looking back at this year’s track season, it’s easy to see the team has a bright future; the women’s team in particular. Behind three young studs who already have state experience, the team is poised to dominate the sport for several years to come.

The boys team also won the State Championship Combined, the first Track and Field title for the team at state by placing above all 2A, 3A , and 4A schools with a wheelchair athlete. 200 schools qualified for the championship. the trophy is currently on display in the HUB trophy case.