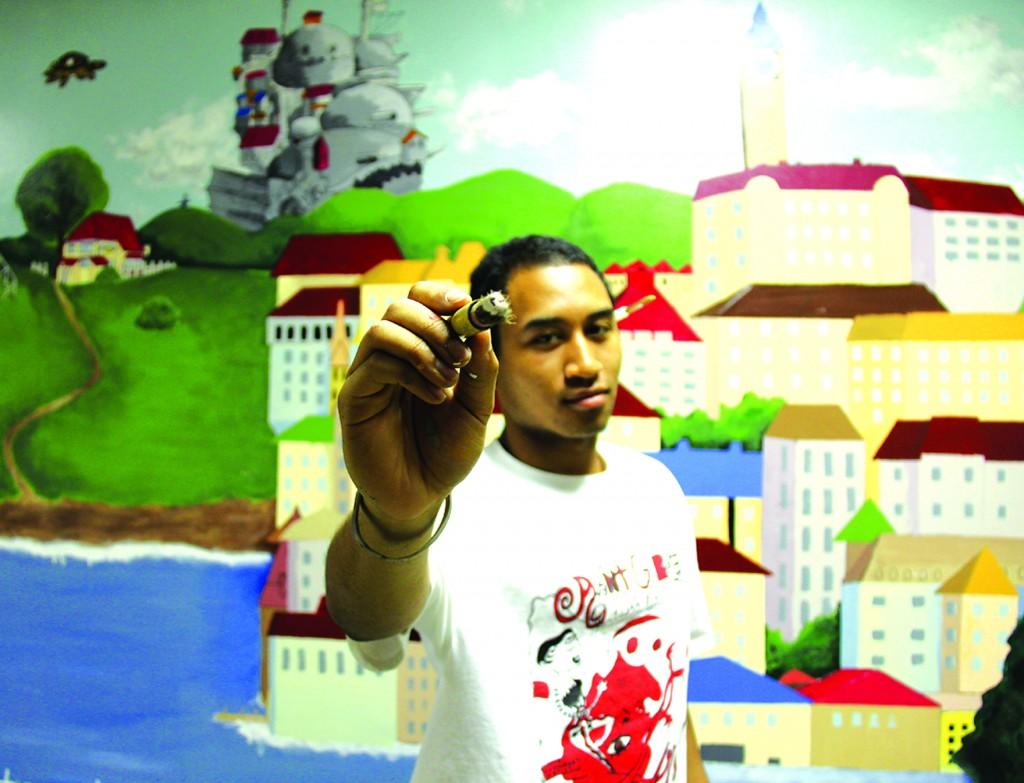 Despite his many appearances on HBN, not many people know Louis Mouton as a fighting artists, a reputation he received with his involvement in art at MTHS and martial arts.

Mouton is a Cambodian African American that came to MTHS halfway into his junior year.

He lives with his mother, step dad, and little brother, and he has found that he enjoys the school and feels welcomed.

During his time here, Mouton has become the Art Club president and revived the club by recreating the art murals.

As the president of Art Club, Mouton has collaborated with art teacher Tim Cashman to reinvent the art hallway. Together, the two divided up students into nearly 20 teams and allowed them to demonstrate their abilities by putting their ideas and images on the walls.

Louis recently became active in art and, “[the art murals] have really been my first painting project and this has been my first project of this size.”

Considering that the art hallway is Mouton’s first painting job, it’s remarkable how well the art murals are turning out.

Unlike renowned artist like Leonardo da Vinci and Michelangelo, Mouton is unfamiliar with painting. Instead, he enjoys the simplicity of art.

“I mainly just draw with pencil on paper, [and] I carry a sketch book around,” Mouton said.

Contrary to his recent interest in art, Mouton has been active in martial arts much longer. It is something he has done since he was seven years old and because his step dad is a kung-fu instructor.

When thinking about whether he likes martial arts or painting more, Mouton was undecided.

“It’s really split down the middle between art or martial arts. Martial arts is something I’ve been doing since I was seven, [but] I’ve been into art in the past couple of years [and] it’s really my passion.”

Likewise, Mouton is forced to split up his time between both talents. Mouton attends martial arts lessons several times a week and, “I try to draw a couple hours a day before I go to bed.”

With graduation also coming up, many seniors may be worried about how they will fit their hobbies into the busy bustle of preparing for college or finding employment, but not Mouton.

He plans to carry on his talents and passions past high school.

“I intend to go into the Army after I graduate and I’ll use the money I get from the military to pay for art school.”

It’s clear that Mouton’s martial arts skill will come in handy in the Army, but some may wonder why he decided to join the military of all options. Mouton answers, “I feel like it’s something that I’ve wanted to do.” His desire to serve in the military may be rooted in his family’s history in serving in the Armed Forces. He’s had family members from both sides serve in the Army, the Navy, and the Navy Seals, and Mouton plans to carry on that legacy.

It’s not every day that you see an artist serve in the military and pulling fighting moves. Even da Vinci didn’t serve as a soldier.