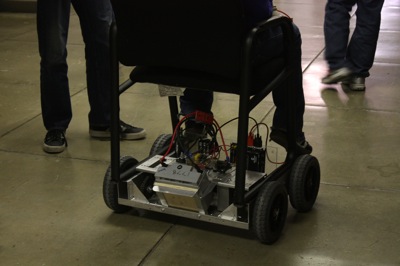 While winter sports are finishing up, Robotics Team is starting to prepare for this year’s competition.
The weekend of March 6 marks the start of this year’s regional competition. The team will start by traveling to Portland for their first face-off, and then later to the Seattle Key Arena for the second. The team has been preparing most of fall, have already shipped their robot, and spent the last few weeks planning strategies.

Despite being only around for a short three years, the team shows an impressive record. 2006, the year the team first formed, they took the Rookie All Star Award in Atlanta. In 2007, doubling in awards, they were a regional finalist and also took the Safety award, honoring safety features in design. Last year, they took another finalist spot in Seattle and also won the Imagery award, rewarding presentation and spirit.
Every year, the producers of the competition, FIRST (For Inspiration and Recognition of Science and Technology) throw in an extra twist to challenge their competitors According to Team 1778 Co-President Brandon Crader, their year’s challenge is a slippery playing field. “The floor is like ice,” he said. “There’s almost no friction. They always add a twist to the end to make it more fair.”
For now, the most important factor for the team is more recognition. Crader and his team are looking for more recognition of their club. “We’ve been looking for a lot of support from our school,” he said. “So that they can see our accomplishments.”