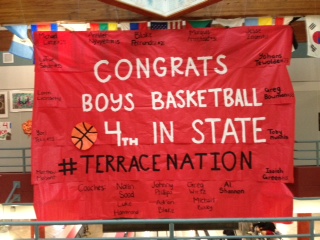 Congratulations to the MTHS men’s basketball team for winning 4th place for the WIAA 3A category.

While the Hawks may have not won the state championship, it sure felt like it on March 2 when the team hoisted up its fourth place trophy, giving closure to many seniors in what was their final game as a Hawk.

This was a season that will be remembered by overwhelming defense, highlight reel plays, and redemption at the Tacoma Dome just one year after being eliminated following two straight losses on the same court.

All year, coach Nalin Sood had preached defense to his team, frequently holding opponents to fewer than 50 points a game.

Before even reaching Tacoma, the Hawks defeated highly-touted Foss 63-53 on Feb. 23.

Foss’ star guard, Dezmyn Trent, was forced to sit out just a few minutes into the game due to a leg injury, giving Terrace a major advantage over the Falcons.