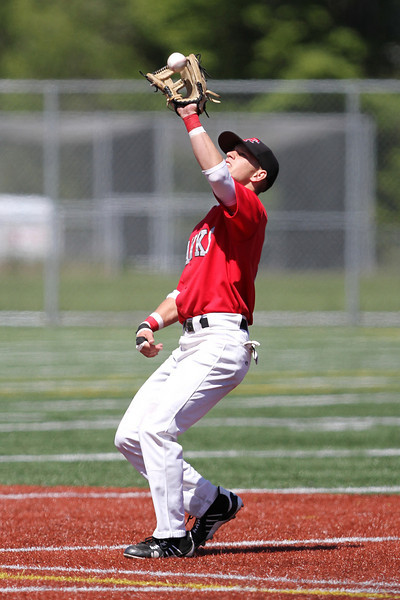 In the most recent issue of The Enterprise, the match-up between Terrace and Edmonds-Woodway was considered one of the “Games of the Week.”

In a brief synopsis of this game, The Enterprise deemed this year for Terrace a “rebuilding year” since most of the varsity team graduated last spring.

This year, there are just two returnees on the varsity squad, Aaron Brooks and Andrew Woeck. The lack of returning varsity players might lead one to believe that the Hawks would not be able to hold their own this season.

Yes, the Hawks do have just two returning varsity members this year, however, many other teams in WesCo South are in the same situation, and so far the inexperience has not really shown.

According to Brooks and senior Chris Raunio, the team’s goal is to make district playoffs. Their biggest competitors are Kamiak, Edmonds-Woodway, and Shorewood.

Coach Andrew Watters said that Terrace, “will have to produce runs the old fashioned way” as they are not projected to hit as many home runs as last year.

The main strength of the team is their pitching and defense.

Friday night was a prime example of this. Terrace pulled out a 1-0 win behind the strength of pitcher Brooks, who has been instrumental to the team’s wins so far.

Brooks has three complete games with an ERA under 1.4. To put these statistics in perspective, Felix Hernandez of the Seattle Mariners was the second best pitcher in the American League last year, and had a 2.49 ERA and just two complete games the entire year.

Woeck along with Zach Bistline and Bryce Wilkening are the other senior pitchers for Terrace. Connor Eddy, Brandon Choate, Keegan Volpone, and Ryan Swanstrom are the juniors on the team.

If Terrace can score enough runs for their pitchers, and if their defense improves, they may return to the playoffs.

Right now Terrace is 5-3 in league play, with their hardest games behind them.