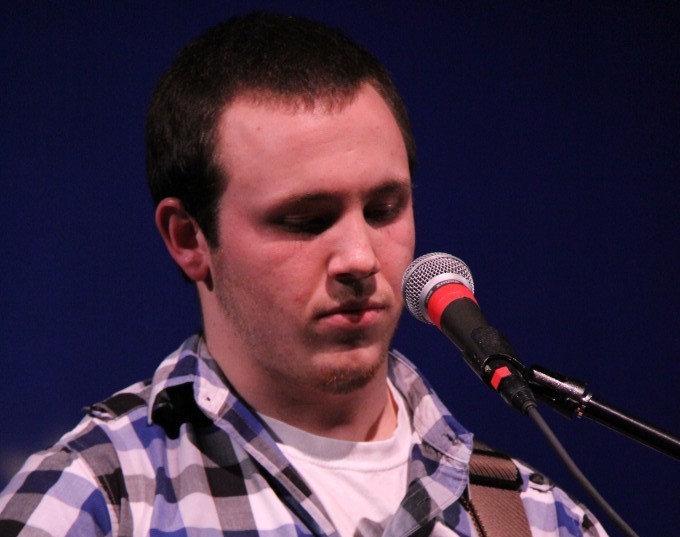 By Lucas Pope
I never have described myself as a singer, although I did grow up amongst them. My mother directs musical theater and my sisters have all participated in plays or choir. Being the only boy in the family, I tend to stray away from the “family business” in order to keep my own identity. I will not say that I do not enjoy singing; I love singing. I am not afraid to say that I love to do my own private concert in my shower and I love screaming lyrics of my favorite song whenever it comes on the radio, but never have I considered myself a singer.

My history of singing started in first-grade when I started doing my church’s Christmas musical every December until I was 12. In fourth grade, I joined the Hilltop Elementary School Choir only to quit a month later because I was told by the teacher that I never sang the way I was told to – “too much nose” is what she said. In sixth grade, I was planning on singing in the school talent show, but wimped out at the last minute. Since then, I’ve strictly stuck to singing at home and with friends; nothing official. My sophomore year, my Pre-Calc class made a habit of singing in class everyday, but it was just messing around. A few people encouraged me to do Terrace Idol then, but I laughed it off as a joke.

For a long time, I have played guitar and piano, and while demonstrating that to a girl, she suggested that I should do Terrace Idol. I claimed that I would only do it if she did, because I believed that she had a great voice as well. After trying out and making it into the first round, I was totally surprised. Even now, I don’t really believe I deserved to get in, but it was great that I had made it. During the practices for the first few rounds, I listened in on other contestants and was amazed by their talent. Before the first round, I decided that if I didn’t make it to the next round, I would be happy to have made it that far. Based on this information, you can imagine how weird it was for me making it to the final round of the competition.

The day of the final round, I spent all day practicing. During lunch, I went into the practice rooms. After school, I took work off so that I could go straight home and get to practicing. Since we needed two songs, I was still debating which one to sing for the regular performance. I decided around 4 p.m. that I would be singing “Give Me Love” for sure.

Being exhausted from practicing so much, I took a quick half hour nap from 4-4:30. Once I woke up, I felt a sudden onset of nerves, so I put on my running shoes and went on a quick run around the neighborhood. I practiced my full performance one last time at about 5:15 and then packed up my guitar and drove off to the school.

Once I was in the theater, I sat down immediately to watch Senaiet practice. I remember being shocked at how great she was and specifically thinking, “there’s no way I’m beating that.” Once she was done, I went up to the stage for my own practice run at about 6 p.m. I was surprisingly nervous for an audience not even being there. From about 6-6:30, I was in and out of the practice rooms, going over the song, imagining anything possible that could go wrong.

For me, when I’m about to perform, I tend to get overwhelmed with nerves, even to the point where I’m either going to throw up or freak out, but there always comes a point where a voice in my head tells me, “Whatever happens, happens. As long as you do your best and have fun while doing it, you’ll be just fine.”

At 6:30, we were called into the Choir Room so that we were all accounted for. I checked the order sheet and saw that I was the last performance. I had from then until about 7:30 to prepare. I’ll make a list to simplify how I used my time (see below).

During the performance, I was in my zone. It felt good singing because I knew that I was getting it over with. While singing, I can specifically note that one of my best friends, Peyton Morrison, was sitting in the front row with his girlfriend. He smiled and I smiled. Great bro moment. I also gave a little wink to a close friend in the crowd, whose name I’ll keep to myself. It was great going out and celebrating with friends that night. I’m glad I did Terrace Idol and I would encourage anyone who has ever thought about doing it to try out.