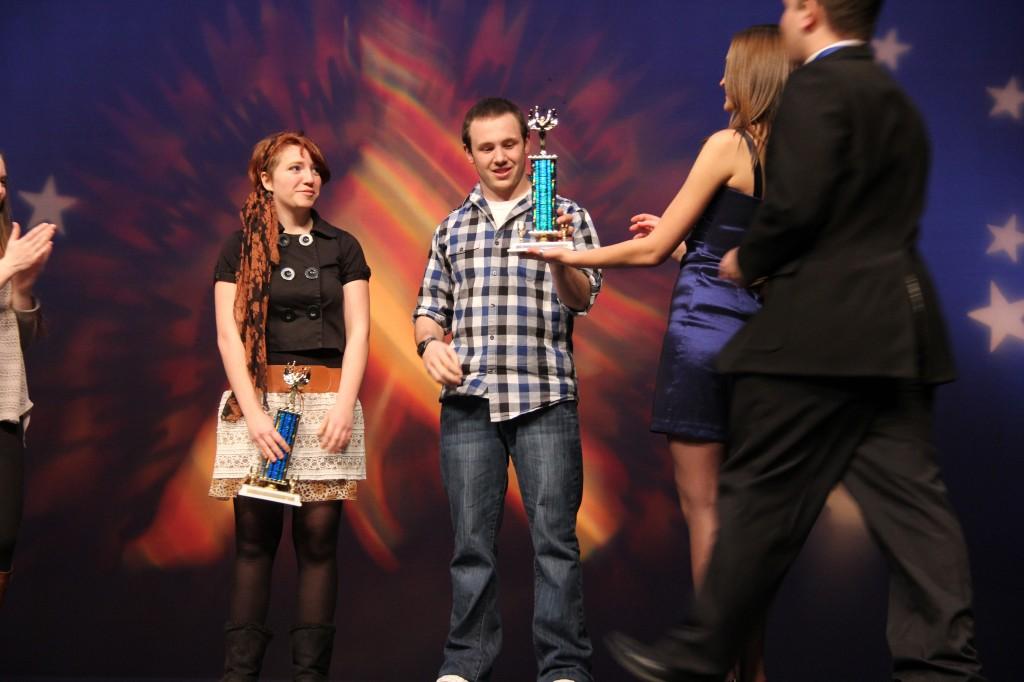 The third and final round of Terrace Idol 2013 was held last Wednesday, January 30.

The much-awaited event started with Kaitlyn Martin, the winner of last year’s Terrace Idol, who sang two of her original songs.

Immediately, the group of fans of Abby Martinez of LHS and Lucas Pope of MTHS rallied for their own idol.

The three returning judges of the night were: Mackenzie Thoms, who was in season 11 of American Idol; Emily Brotherton, whose songs have been chosen in 2011 and 2012 as a part of the Top 10 in a local radio station’s local music contest; and Frank Blosser, who was a former member of the Seattle Chorale and is currently a music teacher in the Edmonds School District.

Masters of Ceremonies for all rounds who entertained the audience really well, were junior Monika Young and senior John Moore.

“I think they’re very talented. All of them. They had their own individuality about them and uniqueness, and a wide range of voices. I like Katy because I liked how she changed up the song to make it her own. I also liked Lucas’s “Give Me Love.” He sounded so much like the artist,” Jennifer Creagan said.

Chosen from the last round, these five contestants competed for the title of the 2013 Terrace Idol:

Terrace junior Senaiet Zerom sang “How to Touch a Girl” by JoJo with senior SunYoung Song on the piano and Principal Greg Schwab on the guitar. The MC’s announced that if Zerom could be an animal, she would be a cat, because she’d be spoiled and would get to sleep in all the time.

The judges commented that her voice sounded a little tired, probably because of the rehearsals, but that the richness of her voice was still incredible.

The next contestant was junior Abby Martinez from LHS, who sang “Titanium” by David Guetta featuring Sia. The MC’s announced that if Martinez could be an animal, she would be a tiger because she could eat the people she didn’t like and still be cuddly. She also chose Hunger Games instead of Twilight.

The judges liked her commanding presence on stage-walking around like it’s hers. However, they noted that the tape forces her to be with the music at all times. She was called a season performer, and told that she had two different sounds to her voice, one for each the lower and higher notes.

“Every individual performance tonight was like a true testament on being on the stage because coming out in front of the crowd like that, your peers, your high school, your family, it’s not easy to do and I’ve been there before. I was impressed,” Thoms said.

Then, Terrace junior Katy Bodnar sang “Love The One You’re With” by Stephen Stills while playing her guitar. The MC’s announced that the weirdest thing Bodnar has ever witnessed was while driving on the highway, she saw a person dressed as Santa playing a guitar. It was Easter.

The judges noted that her voice matches well with the guitar. One of them revealed that their favorite part each week was hearing Katy’s song choice, because she has an impeccable taste. “She had amazing vocal control. Transitioning from one note to another is not easy, but she has a natural gift,” the judges added.

Following Bodnar was LHS freshman Auryana Ashoori, who sang “Cry Me a River” by Justin Timberlake with a guitar accompaniment. She chose Hunger Games instead of Twilight as well.

During her performance, she had pauses which were noticed by the judges. One commented that she made a nice recovery. Another advised, “We have to remember. If you don’t make it a big deal, we won’t make it a big deal.” Another said that they liked the raspiness, or ‘twang’ of her voice, and recommended to get closer to the guitar player.

Lastly, Terrace senior Lucas Pope sang “Give Me Love” by Ed Sheeran while playing the guitar. If he could be an animal, he would be an owl, because they can turn their heads around 360 degrees and chose Hunger Games to marry Katniss.

He was the only guy in the competition, and was said to have presented himself well. One judge liked his performance this week better than last week, where Lucas played the piano. “I felt like I was with you on stage,” Blosser said.  His performance and stage presence were noted as good, but he was advised to work on his diction.

“Lucas has the tone and the charisma in his voice, kind of soft and sweet,”  Thoms said.

While the judges deliberate to choose the winner and the audience votes were being counted, Martin sang on stage again with “Under the Moonlight” to entertain the audience.

“The improvements from the contestants this week would be the song choice. I thought they all did really well with that and portraying the story,”  Thoms said.

“I took Senaiet aside, because even though she didn’t win, I just gave her some words of encouragements because I believe in her ability and her voice and I told her to keep working on it because that’s what it takes to be a really good artist. I would encourage her to keep her eye on the prize. Overall, everybody did great. There’s a reason why Katy won,” Thoms continued.

“I think they all did great,” Schwab said.

Now, everyone is stay tuned for Terrace Idol 2014.