Inspirational assembly gets students together 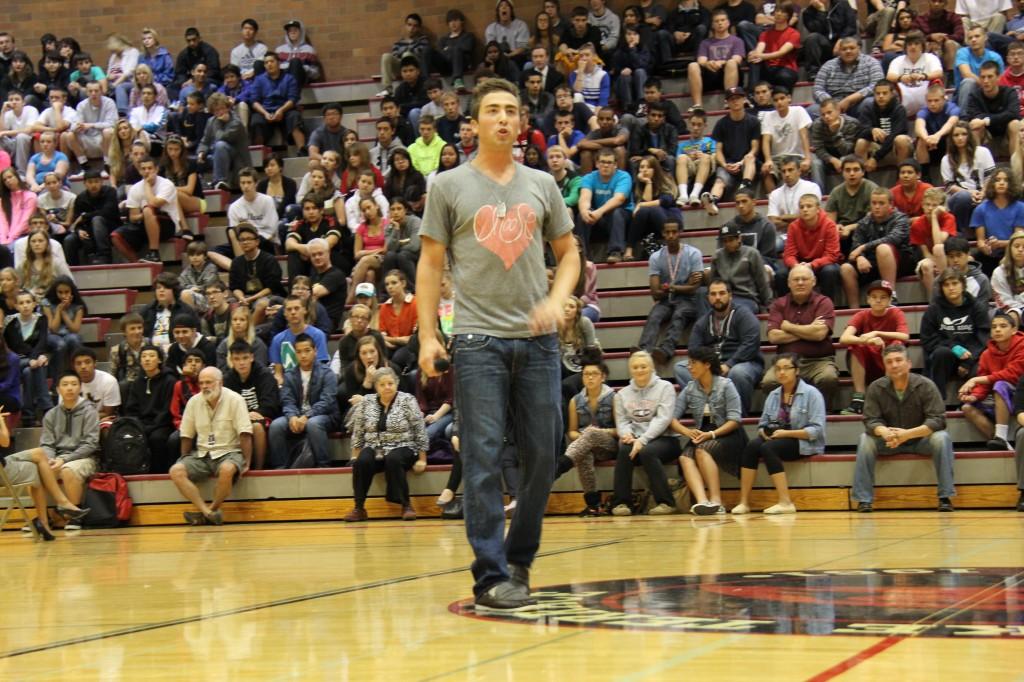 Motivational Speaker Houston Kraft talks about what people can do to make how other people feel.

The annual back-to-school assembly occurred last Wednesday, Sept. 12. It was arranged to motivate students to be successful and outstanding. This year’s theme: The World is a Scary Place.

Keynote speaker, leadership coach and kindness advocate, Houston Kraft, spoke against the negative choices that people make that are influenced by fear. Still in his 20s, Kraft attended Snohomish High School, where a teacher encouraged him, and essentially changed his life, with seven simple words, “I think you’d be good at it.” It was all that Kraft needed to pursue a student leadership position. Unfortunately, he failed in his first election, but he re-ran the following year as the ASB president.

He went on to attend Bowdoin College Brunswick, Maine for two years, where he earned a position as class president. Over those years, Kraft succeeded in a profession that he enjoyed, and he gained a reputation as an excellent public speaker with an uncanny ability to motivate people, especially students, by guiding them through their fears, struggles and tough choices.

Kraft brought this skill for Mountlake Terrace High School students in hopes of teaching them to stand to their full stature and not allow fear to hinder them. “The world is a scary place from the moment you are born, and fear makes us do stupid things,” said Kraft during his speech. He later goes on and communicates to students that we can’t decide our emotions, but we can decide on how to take action: we can either allow fear to control us, or we can decide to fill our lives with love.

He also talked about on how when he was a kid, there was this girl named Lisa, that she didn’t like. She didn’t know what she has gone through until years later. But you don’t need to know somebody else’s story in order to treat them right. He also mentioned about his favorite quote, “People won’t remember what you say, people won’t remember what you did, but they will remember how you made them feel.” He said that even he apologize to her, it wouldn’t change a thing. There is also this story about one guy who was dancing during lunch, alone and uncomfortably, but then moments later, the whole school joined him. That is how a person can impact other people around them. He also talked about his love life in high school. When he asked for a volunteer to do a little skit with him, junior Jadey Good eagerly stood up.

Kraft ended the assembly by telling to everybody, without the microphone, about what they can do to make MTHS better.

After the assembly, the members of ASB, Interhigh, Mix It Up, and Spirit Council stayed in the Gymasium. They talked about how to be a better leader, and played some games. The participants were also asked to form one line in the other side of the gym, and have to dance their own unique way, one by one, while the music was playing through the opposite side of the gym. There were some students who didn’t do the whole routine. It implied that when they dance, stop and get embarrass in the middle of doing it, they never actually finished what they wanted to accomplish. Students were very reflected during the day.

According to his website, houstonkraft.com, “We can’t choose how we feel, [but] we can choose how we act. The world is a scary place, but we can choose to fill it with love.” Kraft also stressed his key-points, “Fear is a feeling and love is a choice,” and “The way we feel is temporary, but our impact on others is permanent.”

He has also made a video called “Perspectacles.” You can buy his “Choose Love” shirts for $12 on his site. You can also follow him on Twitter, @houstonkraft, or find him on Facebook.