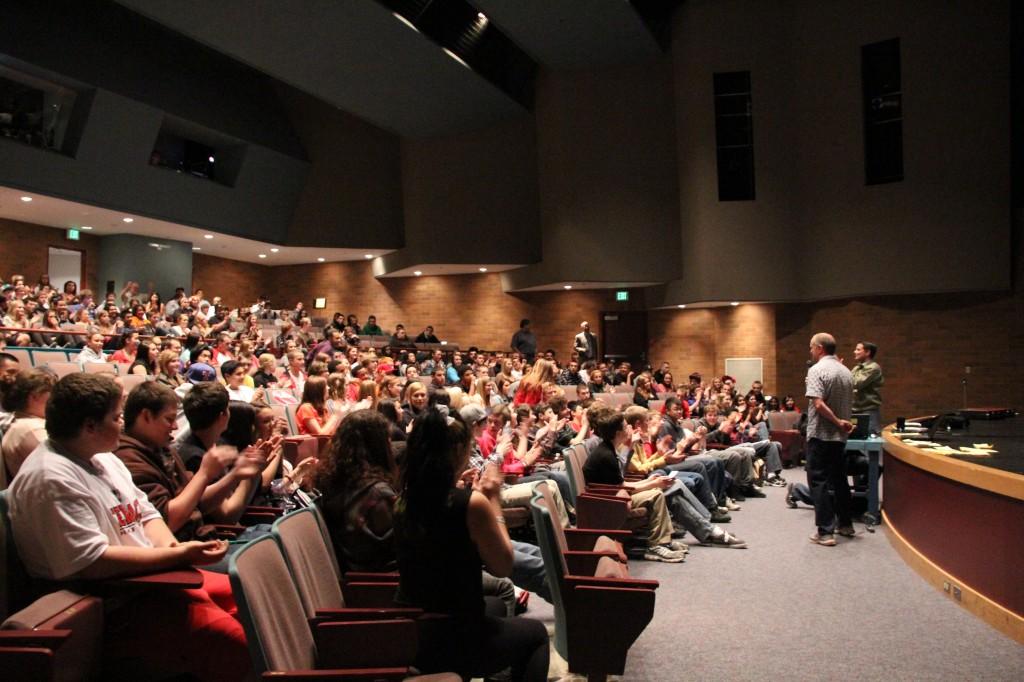 The 5th annual Humanities Film Festival, or HiFF took place on Wednesday,  May 30th, during 5th and 6th period in the theater.

The event was introduced by the Humanities teachers, Christopher Ellinger, Steve Merlino, and Dan Falk. There was an Intro sequence video made by the sophomores Farishah Sarif, and Joe Koenig, showing how different groups work their way through the festival.

Each class had their own topic of filming. The sophomores concentrated on the topic of nuance, and the cause of conflict. The first film that was shown were from Ellinger’s AP European History class. They had more challenge than everybody else, because their class wasn’t a block period. The film was titled “Fire and Ice,” starring Kristjan Pedersen, Wyatt Allemann, Bryce Pingul, and Andre Penner. They’re topic was about the Cold war and an arms race. The next film was “Girl War I,” starring Marissa Mason, Tauren Kure, Sarah Coxwell, and Sarah McAllister. The winning film for the sophomore class is “The Love of the Choster,” starring Toby Munnis, Taylor Pia, Evenezer Tesfastion, Anna Collins, and Sarah Barisic. The last film from the sophomore class is “The Lucky Lincoln,” starring Peter Wang, Olivia Driscoll, Krenzie Grayson, Kirsty Dale, and Christina Salsbury.

The juniors had six entries for the festival. Their topic was about satire, the use of humor and criticism. The movies were “The Guy code,” “Estair,” “Hall Monitors,”Humanities Teachers,” “Caveman Goes to Work,” the winning movie for the junior class, and “The Struggle.”

The class of 2012 had their topic as film adaptation. Due to senior projects, Merlino did not have that much time to focus doing films. The films were entitled “Dodge Ball,” “Bruce Almighty,” “Matrix,” “The Mean Girls,” and “Slaughter House 5,” being the winner for the senior class.

Each winner from each class won a certificate and a gift card. What different this year is that there is no freshman class representing the festival.

While tallies were being made, Merlino showed some of the most obscure films he’d seen this year. The top two votes were really close, having “Hall monitors” as second place, and the Humanities Film Festival 2012 People’s choice awards winner, was “Humanities Teachers,” starring Taylor Johnson, Emily Drew, and Aaron Golesch.

Everyone is sure looking forward for the upcoming HiFF 2013.