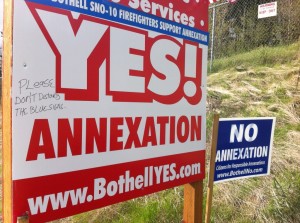 It was only a few months ago in November when the city of Bothell proposed to annex areas of unincorporated Snohomish County – a plan which was rejected by voters. However, both sides of the issue have been aggressively campaigning up until the April 17 vote.

This is the second time the city of Bothell is attempting to annex the 5.6 square mile area that belongs to the county. The potential annexation would add 22,000 additional citizens.

In February, the citizens of North, East and West Bothell Annexation (NEWBA) requested that Bothell city council place a annexation resolution on the April special election ballot. Supporters of the proposal believe that the annexation would lower taxes and bring more services to citizens.

Opponents of the annexation say that the city of Bothell has been fiscally irresponsible and is trying to increase its population to generate revenue for the city. They also believe that police and fire services would worsen – Fire District 1 has been against the annexation.

Recently though, the issue, with jobs and services on the line for thousands of residents, has seen vandalism and destroyed signs. There have been reports of signs that have been stolen, spray-painted and torn apart from both the yes and no camps. Nearly every main street in the proposed annexation area is littered with the red and blue campaign signs.

If the proposal passes, the annexation will take place on Dec. 31.