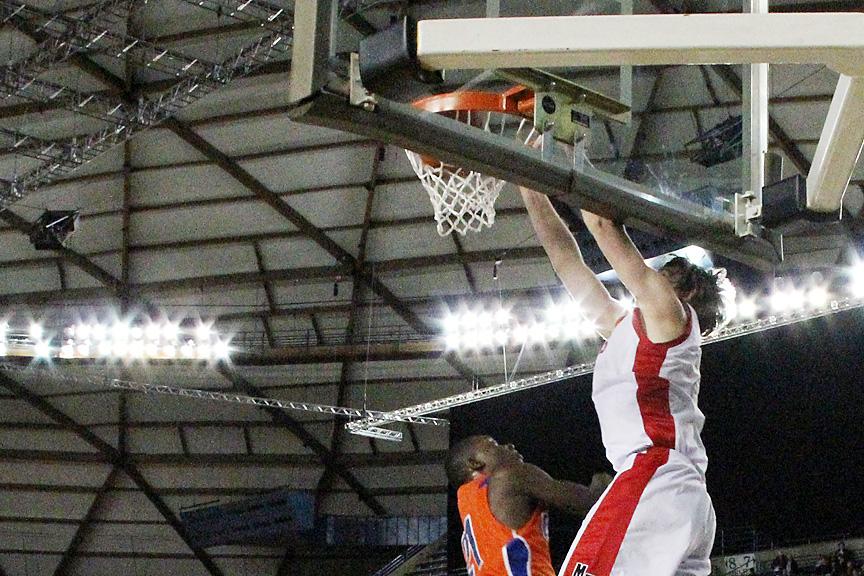 In basketball, speed kills. In the first game of the state tournament, Rainier Beach showed they had plenty of it.

The Rainier Beach Vikings knocked off the Mountlake Terrace Hawks 67-51 in the 3A men’s state basketball tournament at the Tacoma Dome.

Beach’s senior guard Anrio Adams led the Vikings with 24 points, 5 assists and 6 rebounds in the opener.

Rainier Beach’s tough defense caused problems throughout the game for the Hawks. The Vikings came away with 11 steals.

“We didn’t focus the way we should have. We didn’t come out as hard as we should have,” Terrace’s senior post Ryan Shannon said. He scored 10 points on 5/11 shooting.

In front of a pro-Terrace crowd, guard Blake Fernandez connected with Shannon for an alley-oop that ignited the crowd in the fourth quarter.  However, Rainier Beach would promptly end any chances of a comeback. The Hawks trailed for the majority of the game, shooting only 33 percent from the field and turning the ball over 17 times.

“Uncharacteristically, we had more turnovers than you need to have to be successful but then again, we haven’t played a team like this all year,” MTHS head coach Nalin Sood said.

“I’m just impressed with their defensive toughness and that game got away from us in the second quarter,” Sood said.

Despite Rainier Beach’s stellar second quarter outscoring the Hawks 19-11, Terrace made a 7-0 at the beginning of the second half behind Terrace’s junior wing Marquis Armstead hot perimeter shooting. Armstead led the Hawks with 16 points and 5 rebounds. However, Adams and the Vikings would respond and eventually extend the lead by the end of the third quarter.

Sood commented on Adams, who will attend the University of Kansas to play basketball next year. Sood said, “They got the ball to their best player when they needed to and he hit some outside shots, he went to the blocks and hit some stuff, he’s a tough matchup. The difference right there was Adams.”

Sood also added that he felt some players didn’t play up to their potential. Fernandez, the Hawks’ leading scoring during the regular season, only scored 1 point and did not make a single field goal. All things aside, the Hawks return to the Dome for another early game tomorrow morning.

The Hawks face the Lake Washington Kangs on Friday morning at 9:00 a.m. at the Tacoma Dome. The Kangs lost to the University Titans in the second 3A quarterfinal game 61-55. If the Hawks win, they will play Saturday morning in the fourth/sixth place game at 8 a.m. If the Hawks lose, they will head home.

Rainier Beach, a favorite to win the 3A state title, faces University tomorrow in the semifinals. The winner will earn the right to play in the championship game.