Jalen Pahinui on the Rowdy Rooters and Terrace basketball 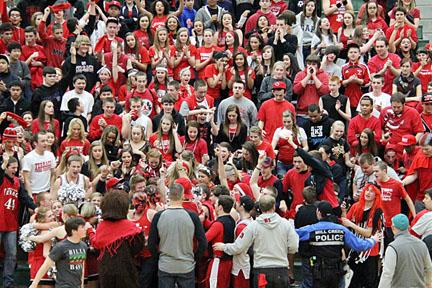 The Rowdy Rooters begin to celebrate following the Hawks' victory over Decatur.

Sending shivers down opposing players’ spines as the gym begins to erupt to the sound of “I Believe That We Will Win.” Rally towels flying, 25 rows full of Terrace Red, the loudest high school students and the infamous Herky put together make the craziest and proudest student section in the state of Washington – the Rowdy Rooters.

Terrace basketball has always been a powerhouse in the WesCo league, but something was just different about this team. I just felt something about this team was special, the amazing talent of the roster to go along with the players’ dedication to the program. But something stood out, chemistry. The way every player got along with each other, knowing that they all had each other’s backs on and off the court made this a team to be reckoned with. I saw all of the components of a great team, and I knew all they needed was just some support and I wanted to give them all of that and more. After playing football in the Homecoming game, when the stadium was packed with kids, I realized that Mountlake Terrace had some school spirit. That school spirit just didn’t translate to every day school life.

I came up with the idea of making what was in my mind: a spirit club that would bring excitement and joy to Terrace. Basketball season was coming around and I was having dreams of a school revolving around a team like they do in college. I brought the idea to Kim Stewart, the athletic director and ASB adviser. We talked about a group of students years ago at Terrace who did the same thing named The Rowdy Rooters and it clicked. I talked to my friends about it and at this time the talk of the basketball team was going to be good, so my friends agreed to the idea. Time passed and I started dedicating myself to this idea, which after a lot of thought became my Senior Project. I decided to take it seriously and brainstormed ideas for the whole season. Rowdy Rooters meetings were set up every Monday for anyone who wanted to help Terrace get more spirited, and we just came up with ways to make the games exciting and fun for everyone with themes and chants for everyone to do.

We got into poster painting in later weeks to advertise the basketball team’s season, which came out to be a HUGE poster that was a blown up image of the team’s schedule with the dates, times, who we played and made it color coordinated. Shoutout to “Picasso” Ben Pierson who painted the poster like a champ. On the top of the poster it read “Road To Dome,” which became our slogan for the whole season. We wanted the basketball team to play for the state championship which is held at the Tacoma Dome. It just fit perfectly like it was Cinderella’s shoe. The team approved and followed with it. As of now, it has became the biggest saying in the school. We felt the need to advertise the games as well as we could to get people to support the team. HBN become the most useful source to do so, where we made announcements for when and where the games would be with a theme that Rowdy Rooters had come up with in meetings. Big shoutout to Austin “Sasquatch” Johnson for doing the announcements with me, always bringing the hype and excitement. I love you man.

Games went by in the season, and Terrace was winning games by 20 and was undefeated. The student section had the same name as the club, the Rowdy Rooters, and were loud at every game. We hit controversy when the administration started getting calls on our crowd for being “disrespectful, obnoxious, and downright rude.” I was called into the office and was told that the school did not want to be involved with such a thing. The school made us change our crowd name because The Rowdy Rooters had broken a code. Three games under the new name “The Humane Hawk Society” went well and fit what we were trying to be, humane and respectful. We were given the Rowdy Rooters name back for being respectful at those three games and we have kept it up the whole season.

The basketball team was undefeated and becoming a well known team in the state climbing up the Seattle Times Top 10, where we got to as high as being ranked second in the state for 3A and at one point we were the only undefeated team in the state. Players like Ryan Shannon, Marquis Armstead, Coby Russell, Blake Fernandez, Greg Bowman and Loren LaCasse became well-known names around the school. Home games on Tuesdays and Fridays became the place to be, the games were always fun, loud and it was good seeing Terrace play amazing basketball. The crowd kept getting bigger and bigger with every game and Road To Dome was a clear thought in everyone’s mind.

The District Championship was the most packed game in the Terraceum by far, and the loudest. People wanted to actually be at the games and wanted to support our team. Shoutout to Aleksey Chernov, the biggest fan in the section. The free throw finger wiggle shall be put in the Hall of Fame. And stick with the rapping career. The atmosphere at all of these games, in my eyes, there is nothing better. Loud, packed with enthusiasm, spirited, everyone having fun and great basketball are just a few of those things. The chants like “I Believe That We Will Win,” “Seven Nation Army,” “If You’re Winning and You Know It” and “Olé, Olé” became the highlights of the games. My absolute favorite was The Rollercoaster after third quarter of every game, seeing everyone smiling, laughing with each other and just having fun is all I wanted for people to feel.

After winning our regional game against Decatur, Terrace completed the Road To Dome and will be playing in the Tacoma Dome this week. I have never been so excited in my life. I’ve put my heart into this student section and I have been complimented by hundreds of people saying The Rowdy Rooters are the best student section they’ve ever seen or The Rowdy Rooters are the most exciting part of the games. I have been fortunate enough to lead the student section and take the compliments, but I just want to say some thank yous.

Thank you to the basketball team for bringing our school together, you guys have played amazing but it’s not done yet. I can say for the crowd, you guys are the most exciting team to watch, as well as most good looking team in the state. Ryan Shannon and Marquizzy, I love you guys and stay feeling godly. Terrace, keep playing your best and we will support you to the best we can. We believe.

I can be proud to say Mountlake Terrace has the most school spirit in the state. I am proud to say I’m a Hawk.

Editor’s Note: Senior Jalen Pahinui is the founder, heart and soul of The Rowdy Rooters. The Hawkeye asked Pahinui to contribute this piece as part of our coverage of this week’s men’s 3A State Tournament. What are your thoughts about The Rowdy Rooters? Did you participate this season? Did you observe their spirited antics at any of the games this year (they were at all – home and away). E-mail us at [email protected] or comment below.