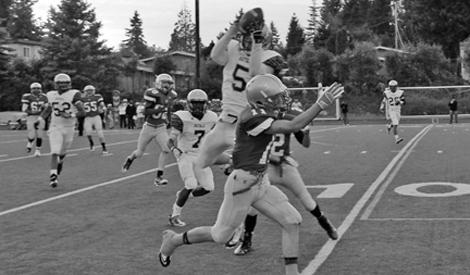 The great Vince Lombardi once said, “We didn’t lose the game. We simply ran out of time.”

The same seemed true for the Hawks during their Homecoming football game. In a devastating, yet thrilling 21-20 loss to district rival Lynnwood, the Hawks suffered their first defeat against the Royals since 2007. It was the second win of the season for the Royals after beating Marysville-Getchell on Oct. 8.

Lynnwood absolutely overpowered the Hawks in the first quarter, jumping out to a 7-0 lead just over two minutes into the game. The Hawks were able to respond with a touchdown of their own with eight minutes left in the half, tying the game before giving up 14 unanswered points before halftime.

Coming out of the locker room seemingly rejuvenated, Chance Ragsdale broke away for a 49 yard touchdown run on the Hawks first possession of the second half. Down 21-14 going into the fourth quarter, there was a still a feeling from the crowd that the game may have been out of reach.

But on their final drive of the game, something almost magical happened for the Hawks. After a pair of long runs for a first down by junior quarterback Beau Kennedy, the Hawks found themselves nearly inside the red zone with 1:44 left in the game.

What came next was straight out of Hollywood. Running with mechanical perfection, Kennedy took the snap, dropped back in the pocket, and in a stunning move, pulled a trick play and pitched the ball to junior wide receiver and homecoming prince Lucas Pope.

Pope scanned down-field and found senior Jalen Pahinui wide open just outside of the end zone. Pope was able to connect with Pahinui, who was tackled on the 2 yard line with 1:35 left.

But Pahinui wasn’t done yet. Kennedy lobbed a pass to him for a touchdown, bringing the game to 20-21 in favor of Lynnwood with just 0:51 left. Coach Umayam was left with a difficult decision. Go for the extra point and push the game into overtime, or try to pull off a two point conversion and win the game – a risky play to be sure with nowhere near enough time to recover from it if it failed.

After a seemingly endless time out, the Hawks brought their special teams squad onto the field to go for the extra point and the tie.

The crowd was already thinking about overtime as four Lynnwood players broke through the center of the Hawks offensive line and blocked the kick.

For a split second, the stadium was silent. Complete and utter shock swept across the stands. The Hawks had not only marched the ball down field to nearly tie it up, which was unlikely enough, but then the Royals had blocked the extra point – a play that fans rarely see fail in any level of play in football.

When asked about his decision to go for the extra point Coach Umayam said, “Our defense did a nice job all half. We had the momentum, so I felt if we could extend the game, take it into overtime, we could get it in overtime.”

Even after the blocked PAT kick, the Hawks nearly had another shot at the game. With a beautiful on-side kick, the ball bounced off a Terrace player before the Royals recovered possession and took a knee to end the game.

After the game, Umayam added, “We didn’t play our best football the first half,” however, that being said, “our offensive line was able to spring a few chances, Beau made a couple really nice impromptu plays.”

Another football great, Mike Ditka also once said, “You’re never a loser until you quit trying.” The Hawks definitely didn’t go down without a fight.