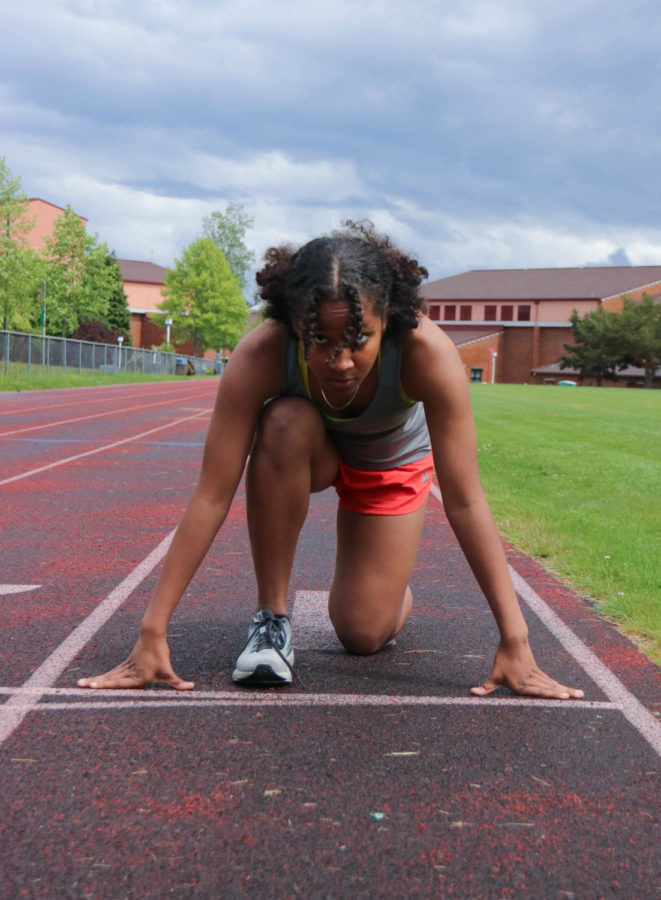 Damaris Ibrahim prepares to practice a sprint at the Terrace track.

From her elementary school days to senior year and onward, senior Damaris Ibrahim has been involved in more activities than one would think is humanly possible. Juggling music, sports, and other extracurriculars all at once is a feat that seems nearly superhuman.

Luckily, none of the pressure has ever stopped her but instead given her an even more of a reason to keep going.

Sports have always been a constant occurrence in Ibrahim’s life. After doing soccer in sixth grade and track and cross country in seventh and eighth, Ibrahim had a wide variety of talents to choose from in her freshman year.

“I did track and cross country both years [of middle school]. I started cross country my freshman year,” Ibrahim said. “Believe it or not, I was never super athletic. I just kind of wanted to do the things I did.”

Terrace’s cross country team is known to host many social gatherings in an effort to bring the team closer together, one of them being team dinners.

“Just by being around the team, it was really small back then [2018-19], I had an environment that was really welcoming,” she said. “We had team dinners every week.”

Although some people assume that all athletes maintain a strict diet of greens, water and maybe some Gatorade, the team dinners Ibrahim attended had more relaxed and enjoyable courses.

“For cross country, we have a very specific diet of mac and cheese and chocolate milk. Sometimes spaghetti, [or] some kind of salad. But, chocolate milk is very important for our diets.” Ibrahim said.

In her freshman year, Ibrahim joined some clubs that she participated in occasionally, but it wasn’t until her sophomore year that she officially started attending these clubs more consistently. One of the first was journalism, thanks to her friend Jonathan Kwong.

“I joined journalism my freshman year, but unofficially about halfway through the year. The whole reason I ended up joining so many other clubs was because of the former editor-in-chief, Jonathan Kwong.” Ibrahim said.

Though Ibrahim was juggling many different extracurriculars and sports in her sophomore year, she still managed to attend the clubs whenever she could.

“It was kind of hard because I had running every day,” she said. “I was doing a lot for journalism at the time, so I went to eco club when I could.”

Not only did the clubs keep Ibrahim busy, but the music programs she was in took up a fair amount of her time as well. Concert nights often ran as late as 9 p.m., and occurred often, as she was in jazz band, choir and orchestra all at once. Ibrahim quickly learned that while participating in so many activities can seem fun and look good on college applications, there’s a limit for everyone.

“When I was a sophomore, pre-pandemic, I was super involved in school activities. But it was almost to the point where it was becoming really hard for me mentally,” Ibrahim said.

Once the pandemic and lockdown began, Ibrahim had a lot of time to think and figure out who she really was, instead of what she thought everyone else wanted her to be. In early 2020, she discovered a group called “Root of Our Youth,” a group of young adults that advocate for racial equity in schools. This group gave her much of the support she needed and created a safe space with individuals who would listen to her when she opened up.

“In ‘Root of Our Youth’ I was able to find the people that saw me for who I was and valued the things I had to say,” Ibrahim said. “It was different from all the school spaces and clubs I’ve been in because I was able to come and be a complete wreck and be a mess, and not know what’s going on, and they were like, ‘Yeah! You’re good girl, just keep going!’”

During the 2020-21 school year, Ibrahim took Jami Wollan’s anatomy and physiology class. The final project for the class was related to making a version of a children’s book.

“The idea of writing a book came from a project for [my] anatomy and physiology class, taught by Mrs. Wollan. That was her final project for my junior year,” Ibrahim said.

Wollan gave the students the option of creating the book by hand or using a fairly easy-to-use program. Ibrahim decided to take the project to the next level, and, using her experience in both writing and the Canva app, wrote her very first book.

It took the entire summer to get her book “The Amazing You!” published, but thanks to a few connections, the process wasn’t nearly as difficult as she expected. The book was made for people of any age to learn more about the systems and different parts of their bodies.

As this school year comes to an end, plenty, if not all seniors are asking themselves the same question: “Okay, now what?”

Whether they are going straight to university, joining the military or taking a year or two on their own, there seem to be feelings of both excitement and anxiety towards the next steps into adulthood.

Pacific Lutheran University (PLU) looks to be the direction of Ibrahim’s next journey, and one that she is very excited to take.

“What made me want to go there is, one, I got a music scholarship there, [and] it’s a D3 school,” Ibrahim said. “I’ve been talking to the track coach there, and it sounds like I’ll be able to do both track and music since those are my two most important extracurriculars.”

As the school has already opened so many opportunities for Ibrahim, it’ll be nearly impossible to choose only one to focus on.

“I’d like to try majoring in the realm of environmental science,” she said. “I’m conflicted because ecology is really cool, but biology and I, we’re not friends. They [PLU] have a pretty good study abroad program, so I hope I’m able to [study abroad].”

The high school experience has been different for every student at MTHS, with some feeling like they’ve missed out and others feeling as if they’ve done too much.

From early September to late June, they have all worked their butts off to study, finish projects and accomplish so many other things that might not have even been related to school.

Make sure to wish Damaris, and any other seniors, good luck with their plans after high school!