Committed to connecting through community 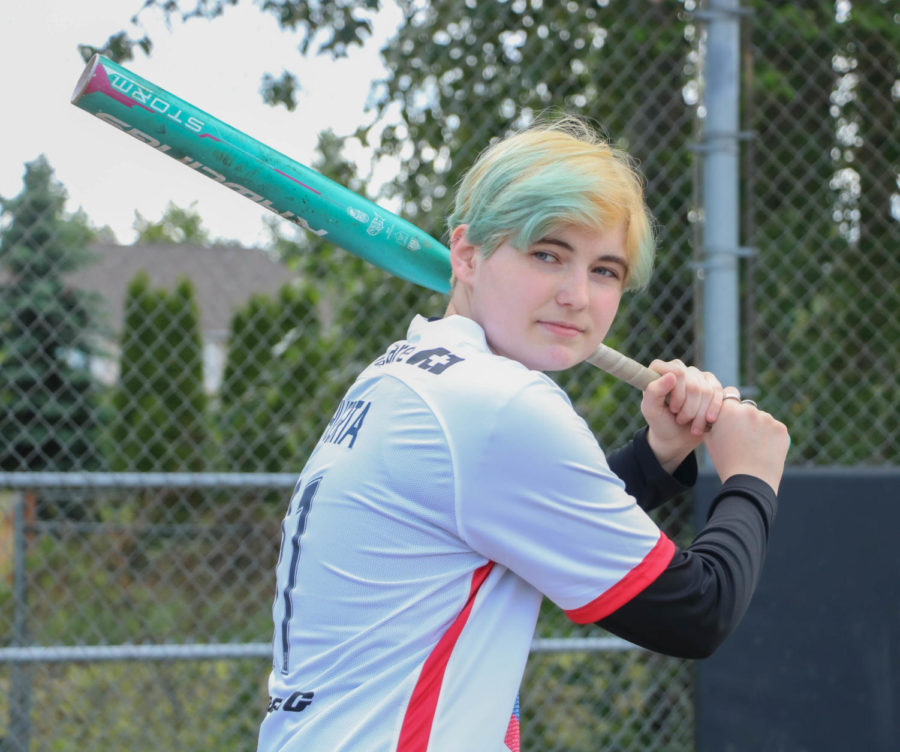 By Maggie O'Hara and Rachel Davis

Senior Emma Kerani is a multi-talented machine, balancing several clubs and sports as they strive for personal achievement, doing what they do best. From basketball to Technology Student Association (TSA), Kerani has had their hands full with various activities throughout their entire high school career. However, they didn’t enter high school as the same person they are today. As their four years at MTHS flashed by in an instant, Kerani went through a remarkable journey of personal growth, forming irreplaceable friendships and gaining confidence from their experiences through the years.

All the way back in 2018, a long-haired Kerani left Brier Terrace M.S. and entered the vast halls of MTHS. As any freshman would be in a new school full of new, unknown people, Kerani was unsure of how to handle the new environment.

“I was a lot less sure of myself,” Kerani said. “As part of that, I didn’t know how to stand up for myself or be confident in really anything.”

However, Kerani didn’t let that didn’t stop them from doing what they loved. In their freshman year, Kerani joined the MTHS women’s basketball team. After playing in middle school, they enjoyed the sport and wanted to continue.

“I started basketball in seventh grade, so I played for six years throughout middle school and high school,” Kerani said.

Along with basketball, they also joined the MTHS softball team in their freshman year. Kerani gained an interest in the sport from a young age, but the team environment added to it was a new experience.

“I started softball really young, playing with my dad,” Kerani said. “Then I tried out in my freshman year, and that was my first time actually playing on a softball team.”

By joining these sports, Kerani was able to not only stay active, but form meaningful and lasting connections.

“One of the biggest things is the people that are also doing them, because I’ve only ever been involved in team sports,” they said.

It was that same feeling of camaraderie that motivated Kerani to get involved in other extracurriculars, including battle of the books, TSA and becoming a connect leader. Whether they were focusing on technology or sports, Kerani always gravitated toward activities that allowed them to work with others and form lasting connections.

“Even in battle of the books and TSA I’m always on a team with someone,” they said. “Having that feeling of working as a team and making connections with other people is really important to me, so those have always been appealing.”

Forming those connections also allowed Kerani to grow close with their teammates, and they made some of their fondest memories at Terrace while spending time with their various teams. One of their most notable was on the basketball senior night of their sophomore year.

“That was the team I’ve been closest with,” they said. “I had a camera with me as we were going through pep talks, and I have a bunch of pictures from that that are really goofy and silly. I like that feeling of closeness, and I’ve had that feeling for a lot of different people. That’s probably in all of my most important memories.”

Only a few weeks after enjoying that special moment, however, Kerani, and everyone else’s lives, would be flipped upside down. On March 13, 2020, MTHS shut down due to COVID, and the feeling of community at Terrace came to a sudden halt.

Kerani was only halfway through their sophomore year when the school closed, and while they struggled, it gave them an opportunity to reflect on who they were.

“The pandemic was a big event for everyone,” they said. “But in a way, I think having that time to first sit with myself, and having the time to figure out a bunch of things made me more ready to get back to school and less willing to take s**t.”

From the difficult experience, Kerani became more confident, both in who they were and in standing up for themself and what was right.

“Going through so much in the span of two years helped me be like, ‘Okay, I survived a worldwide trauma, I’m not gonna let people call me names,’” they said.

When Kerani came back to school in September 2021, they carried that attitude with them, and were ready to make the most of their senior year. Early in the school year, Kerani was going through LGBTQ+ websites and noticed a troubling trend.

“I noticed that all these websites were blocked when I was trying to look up Campus Pride, which tells you if colleges are safe or not, which is important for someone looking at colleges,” they said. “I ended up with this huge list of websites that were blocked for no reason.”

After compiling a long list of wrongfully blocked websites, Kerani wrote a letter on a Google Doc and garnered student support by sharing it around the school. Once they accumulated student signatures, Kerani met with Principal Greg Schellenberg, and from there managed to get the websites unblocked.

“I met with the principal, and then he took it to the assistant superintendent and the director of equity for the district,” they said. “I met with all of them together and had a conversation, and they unblocked them. It was honestly easier than I expected.”

Making such a big impact on the students of the ESD was one of Kerani’s proudest moments at Terrace. It showed them that they were capable of creating meaningful change for not only those close to them, but on a larger scale.

“[Getting the websites unblocked] was my big thing this year,” Kerani said.

After high school, Kerani wants to continue leaving an impact and helping people, and plans on accomplishing that by studying sociology at Willamette University in Salem, Ore. While they had been interested in pursuing psychology for years, it was the research project in Jennifer Widrig-Hodges’ AP Language and Composition class that made them realize they wanted to focus on sociology instead.

“I did my [research project] on women’s sports and media,” Kerani said. “That topic is something I’m super passionate about, and that also made me consider sociology as something I’m interested in.”

Through their experience doing the research project, Kerani learned that studying sociology fit their passions more closely than psychology would have.

“Reading more about politics, and sports and all these different things, I realized I wanted to have a broader focus,” they said. “Thinking more about the U.S. and our society in general was what led me to be more inclined to sociology.”

Because of their time at Terrace, whether they were spending time with their teammates or fighting for what’s right, Kerani grew exponentially as a person, and is sure to accomplish even more as they move on to the next chapter of their life.