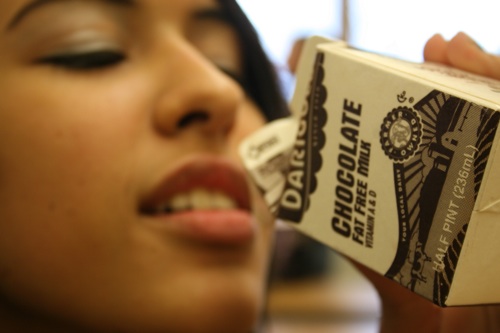 Upon returning from winter break MTHS cafeteria lunch-goers found a drastic change had taken place in the school lunch lines. Previously plastic bagged milk, of the chocolate and white variety, had been replaced with the cardboard carton version students may remember using five years to the prior in Nov. 2002.

The district originally switched from cartons to bags in 2002 to help reduce the volume of solid waste going into landfills.

“Although they were recyclable in the past, wax milk cartons are currently not accepted for recycling,” Edmonds School District Resource Conservation Specialist Pandora Touart saidc.

“At that time [Nov. 2002], the cost difference between milk cartons and pouches was not significant and the district was able to save money [by making the switch],” Edmonds School District Food Service Director Barbara Lloyd said. This switch saved money because the size of dumpsters in use could be reduced along with the number of times per week the dumpsters were emptied because not as much waste was being produced.

The decision to switch back to milk cartons was a district wide decision and was implemented in all schools on Jan. 4.

The main reason for this recent switch back to carton milk was to save money. Over the past few years, the cost of the pouches has escalated and the price difference between the pouches and the cartons has become significant. The use of cartons will save the district $128,000.00 annually.

“In maintaining a balanced budget, we constantly have to perform a cost/benefit analysis on the decisions and actions we take. At this time, it is too expensive for use to offer the pouches anymore,” said Lloyd.

“It’s heartbreaking to go back to a container that is not recyclable,” Assistant Superintendent Marla Miller said.