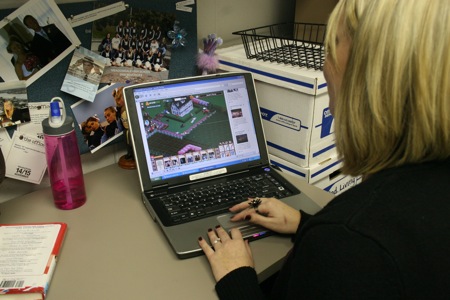 Jessica Walton tends to her Farmville farm on Facebook during down time.

Before new sites were unblocked however, teachers were required by the district to watch a six-minute informative video that reviewed the appropriate use of the sites that were opened to them.

“With today’s advances in technology, our filtering system can now differentiate between staff and students. This means we have the ability to [create] a new Staff level for filtering, thus allowing all teaching staff access to these important resources from their schools while maintaining the stronger filtering levels for students,” said Kim Mathey, ESD Libraries and Instructional Technology Manager, in an e-mail to district employees.

This censorship reevaluation can be traced back to budget cuts earlier in the year that eliminated the Library and Information Systems Coordinator position, whose job entailed dealing with requests for unblocking sites.

Since the position was eradicated, requests for unblocking sites (stemming mainly from teachers) had piled up and response time had been elongated. The new separate staff filtering level has cut the number of requests by half.

Despite these changes, every filtering level in the district will continue to have pornography, dating profiles, spyware, hacking sites, proxies and gambling sites blocked from their profiles. Filtering at the student level will be reviewed in late fall 2010.

English teacher Ryan Niman has been instrumental in monitoring district filtering levels since he first became involved with the cause in Jan. 2005. At this time the district made the decision to block chat, IM, malicious code, and blogs from all school profiles. “Why block a blog, anybody can sign up for a website and post whatever they want on it,” said Niman.

Niman successfully worked last spring to unblock blogs, and has been working with Mathey to give teachers access to override the filter entirely. “I was promised last spring that would happen, and I’m kind of disappointed it hasn’t yet,” Niman said.

Among more educational uses, Jessica Walton had used this reduced censorship to access her Farmville from school.

“Of course I only [play Farmville] on my lunch break. I don’t play it on my free period, because that is when I do work for my classes,” Senior Experience, Chef 1 and Child Psychology teacher, Jessica Walton said.

Walton regularly competes with Kimberly Nelson on this Facebook sponsored game; both teachers are on level thirty-three, with Nelson about two thousand points ahead of Walton. “I’m coming in sick tomorrow, so I will have time to get ahead of her then,” Walton said.

Walton has also used access to Facebook to connect on a more personal level with her students. “I think it has increased my ability to relate with students who have Farmville. Be it if it is just how any chickens they have,” Walton said.