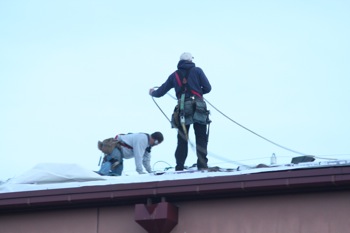 Two men work of repairing the roof of the gym which has been leaking to the point of disrupting 2 girls basketball games and even Homecoming Coronation.

For the first time in many Terrace students’ memories of the school, there has been active maintenance on the roof above the gym. Construction on a new gym roof began over Winter Break, becoming less and less subtle as students came back to school. Numerous detrimental and inconvenient leaks have spurred this replacement, including, but not limited to: the interruption of homecoming coronation ceremonies, basketball games, and overall quality of the school’s aesthetic.

The roof was originally planned to take a month to complete, but this far it has been difficult to pin a completion date. Due in part to rainy weather, uncharacteristic of the season, there have been time extensions, and it is expected to take longer than projected for the project to be completed.

If all goes according to plan, it should take about another month to complete.

It may be surprising to some that the school is able to pay for this renovation, as the budget this year has been decreased so substantially.

“The money to pay for this project comes from the district’s capital projects fund,” Principal Greg Schwab said.

“This is a separate fund from the district’s operating budget. So in terms of an effect on our budget as a school, we won’t be negatively impacted. I believe the total cost for this work is $130,000. We will have more work done on our roof in the future as the entire school’s roof needs to be replaced,” Schwab said.

At a recent basketball game was forced to forfeit by because a rival team refused to play on the wet courts.

“We’ll continue to try and hold events in the gym as long as the leaks do not pose a safety hazard. We have cancelled some basketball games but it is hard to predict in advance if we will need to cancel future events as it really depends on the weather,” Schwab said.

Last weeks’ womens’ basketball game against Meadowdale was moved to Friday, and the Shorecrest game was rescheduled for Jan. 30.

“It’s frustrating that we couldn’t play in our gym. We were all in our mindset for playing and then we had to reschedule,” said varsity women basketball player Teryn Bouche.

Administration has taken this leaky roof problem seriously, and acted to fix the leak. However, the effects of water damage can be seen on the particleboard ceilings within hallways, classrooms, and other workspaces, and have caused many distractions in the school’s visual disposition.

The elements are beginning to show their wear and tear on Terrace, and it is likely that more reconstructive maintenance will be scheduled soon, for other parts of the building.

“So long as it is dry outside, it will be dry inside,” said Schwab.