Weight of the Wrestling World 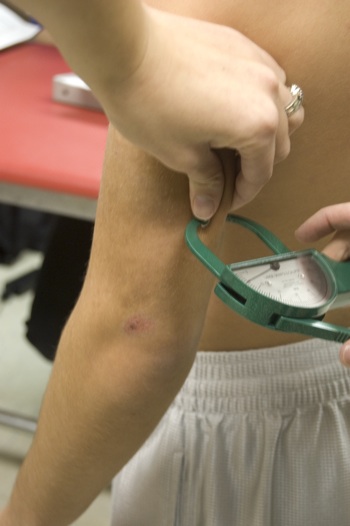 It was about ninety minutes before the district wrestling tournament and the crowd could feel excitement in the air. Anxious wrestlers mulled around in the locker rooms and gyms waiting for their chance to take their opponent down. Amid these anxious wrestlers, some may have caught a glimpse of a Terrace wrestler wearing multiple jackets and sweat pants, running

around outside and away from all the activity. One may have thought he was trying to warm-up, or he was simply calming his nerves, but that was not the case. Eric Quintero was attempting to lose four pounds before the weigh-in at the start of the meet. When he started running, Quintero weighed 116 pounds, but when he stepped onto the scale just ninety minutes later, he had lost the four pounds necessary to drop him into a lower weight class. He admits that this is not at all healthy, but he felt that it was necessary for him to do well in districts and makes it worth it.

Quintero ended up placing very well that day and qualified to be a state alternate. This year looks to be even better. He weighed in at 116, but once again must cut down to 112. However, instead of being able to drop weight whenever he wants, there are some new rules in place. The WIAA (Washington Interscholastic Activities Association) is putting in new standards for weight loss during the season because of all the dehydrated and malnourished athletes that made themselves sick just to drop weight classes.

According to Quintero, “I didn’t eat much food at home, I just had sips of water, and I went to sleep in sweats [to lose weight by sweating overnight].”

He was constantly drained of energy, but his passion to succeed overrides the complaints of his body. He is not alone with this mentality either. Wrestlers across the nation and around the world are aware of their weight classes and many athletes do things like Quintero to drop a few pounds and get into a lower weight class, whether their ways are healthy or not.

Taylor Call also runs to keep weight off. Over thanksgiving break alone he ran twenty-five miles “to keep off the weight from thanksgiving dinner,” he told the Hawkeye.  Mrs. Shannon, the athletic trainer at MTHS said, “athletes were dehydrated and malnourished, so [something needed to be done] to keep them healthy. The old system allowed athletes to lose as much and as often as they wanted. There was not a lot of control.”

The WIAA has taken notice to this and changed the system. Now, wrestlers cannot drop as many weight classes as they want during the year. The WIAA also mandating skin fold measurements along with urine tests to calculate the body fat percentage of athletes and the minimum weight class the athlete can participate in. A male wrestler has to stay at 7% body fat or above for the entire season, or, if they are starting below 7% body fat, they cannot drop any weight classes.

Females have the same guidelines, but with 18% instead of 7%, for obvious reasons. There is an appeal system for those athletes who feel that their original assessment was incorrect, but this process forbids parent or coach involvement and has to be done by a certified weight assessor that did not originally test the athlete.

There are mixed reactions to these new rules however.

“Even though these new weight rules are meant to keep wrestlers healthy, it shouldn’t limit us to how much we can lose,” commented Quintero.

Mrs. Shannon on the other hand likes the new rules. “Yes, I do. I believe that the controls in place for weight loss keep athletes healthy and safe – two attributes that are unquestionably vital for success in athletics,” she explained. “These controls protect the athletes from becoming overly dehydrated or malnourished; this means that the athletes’ bodies are consistently ready for training and competition thereby increasing the athletes’ opportunities for success.”

She does have one complaint though. “Where I have some misgivings and disagree is the minimum [body fat] percentage for females. I believe it is set too low and so leaves female wrestlers vulnerable to conditions and disorders that would negatively impact their overall health and safety and thus their ability to participate fully and successfully.”

Terrace does have at least one female wrestler this year, with the possibility of more coming out in the future. So even though the new rules have made significant changes perhaps for the better, there is still some controversy. This season will be a good parameter on how efficient the new rules are.