How Gregor Mendel changed my life 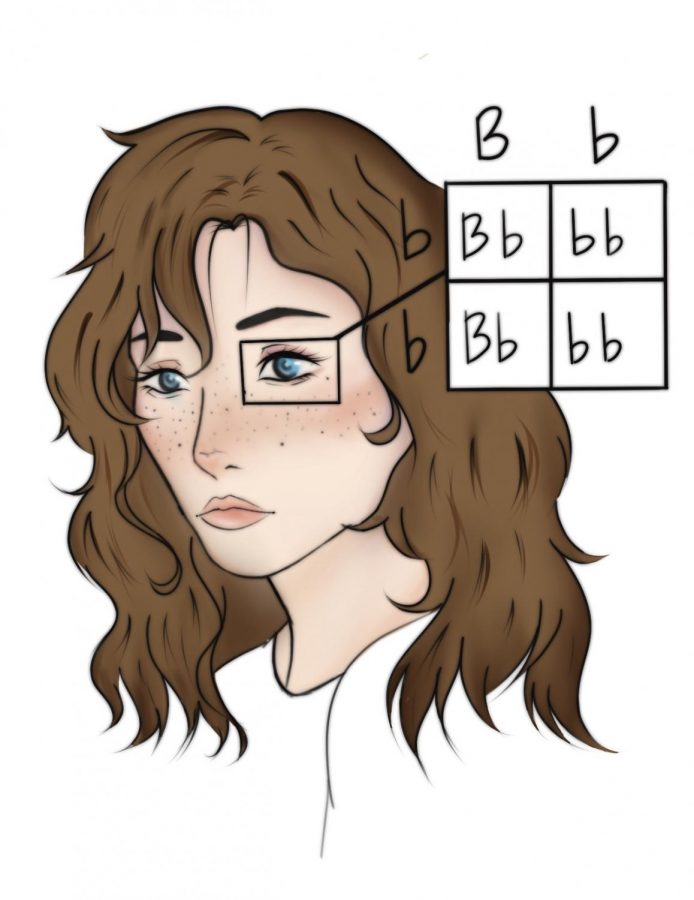 Almost every day when I was young, I would examine a lock of my frizzy blonde hair and ask myself something along the lines of, “Why do I look the way I do?” I frequently questioned why my natural hair consisted of a tornado of unkempt waves, while a majority of my peers sported silky brown hair, or why my father didn’t see colors in the same way that I did.

Unfortunately, I didn’t have the ability at a young age to peruse the internet for the answers to all of my questions, so I buried my thoughts in the back of my mind in case the topic ever came up. To my own pleasant surprise, some of my most dire questions were addressed in 5th grade science. While I had spent the day preparing for another lesson on land erosion, Ms. Espinosa had another topic up her sleeve.

I could hardly contain my curiosity as she drew one large square on the whiteboard, which she  then divided into four smaller squares. Then, she went on to write uppercase and lowercase B’s on top and to the left of the squares.

Ms. Espinosa informed us that the strange graphic that she had drawn on the board had a name and a use, and it was called a “Punnett square.”

Now, this was an unfamiliar term to my young mind, but I was willing to learn about anything that didn’t involve pouring water over sand and observing how it washed away. I instantly fell in love with Punnett squares as soon as my teacher had explained that they affected our traits and the way we look and function as people.

She  told us about the concept of dominant and recessive traits, explaining that one genetic trait dominates over the other, such as how dark brown eyes usually prevail over green and blue.

From this moment forward, I was hooked on the idea of genetics. It had answered the questions that I had kept with me for years, and nothing ever interested me as much as how the genes we couldn’t even see with our naked eye held the ability to determine what makes each individual unique. The individuality of each human life, as well as the rarity of certain traits, took hold in my mind and never left, despite my 5th grade teacher not going much further with genetics than a few worksheets.

Topic of genetics arose again briefly in my 7th grade general sciences class, and now that I had the internet as my disposal, I was ready to delve further into the topic. My passion for science was at its peak thanks to the STEM courses I was taking at the time, and I was fully prepared to revisit my old friend, Punnett squares. I had been itching to gather more information, as the internet only got me so far, but my science teacher had only reinforced what I had learned in 5th grade, along with the words, “you’ll learn more about this in high school biology.”

In the blink of an eye, the moment I had been waiting for since 7th grade was suddenly here. Freshman honors biology with Adam Welman.

From day one, Welman’s biology pun shirts grabbed my interest, but the combination of his teaching style and the compelling labs drew me toward biology, and ultimately, genetics.

In Welman’s genetics unit, we delved further into the subject than I had ever expected from any class in my schooling experience. From my old buddy Gregor Mendel and his peas, to pedigrees and their power within the biology world, my questions were slowly being answered.

Yet, I still craved more information. In addition to my newfound love of biology, my interest in genetics also sparked an interest in diseases, as I have a sister with Crohn’s disease. I vaguely remember her being diagnosed with the rare chronic disease when I was young, so I had always had some interest in diseases and how they affected others. Although researchers are still unsure whether or not Crohn’s disease is completely genetic, as a variety of environmental factors as well as genetic factors are most likely involved with the illness, Crohn’s has been seen to cluster in families. The origins of the disease may not be set in stone, but it’s possible connection to genetics is all that I needed.

The combination of Welman’s biology class and my experiences with those who have rare diseases encouraged me to do more research. Since freshman year, I’ve spent hours upon hours scouring books from the library and the National Institute of Health’s website for more information on genetic diseases, especially rare ones that are sparked by a singular genetic mutation. Since beginning my research, I’ve noticed that many rare genetic diseases are often overlooked, and through this column, I hope that every month, I can cover a different genetic disease that may affect those in our community or even discuss a certain aspect of biology that I believe the community should know more about.

Tune in next month as we embark on this informational journey together and explore many of the rare genetic disorders out there such as cystic fibrosis, fatal familial insomnia and a variety of others.