Peaceful protesters gathered near Westlake Center on Tuesday and marched to meet with Mayor Jenny Durkan. 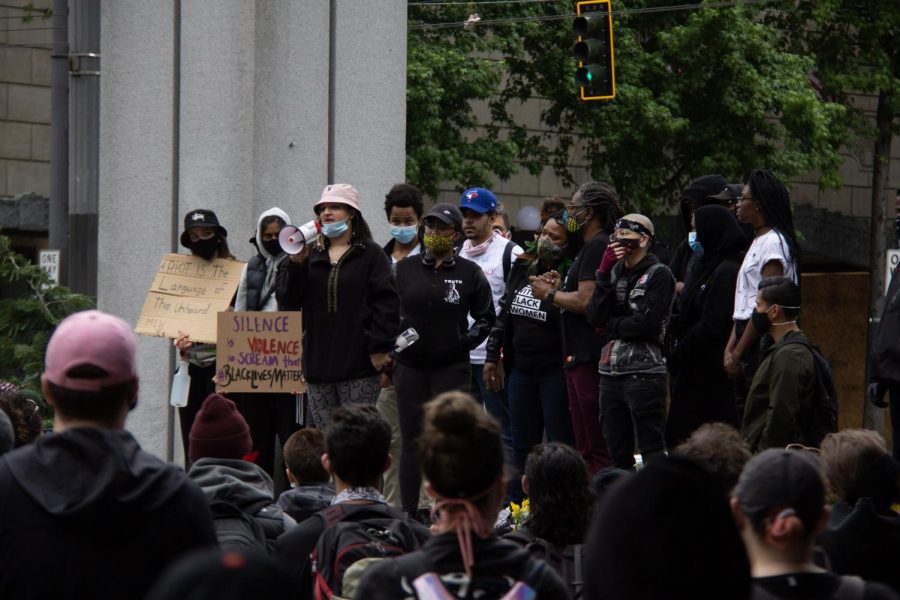 Organizers and leaders of Tuesday's protest share goals and safety information before the march.

Protests against police brutality and systemic racism erupted across the Seattle area over the past weekend. Cities in all 50 states have seen similar protests in response to the death of George Floyd, an African-American man killed by a police officer who knelt on his neck for over 8 minutes. Protests continued in Seattle for a fifth day on June 2.

Protests and demonstrations remained overwhelmingly peaceful on Monday afternoon. Although various demonstrations occurred across the city, most attention was focused on the march organized and orchestrated by community leader and anti-racist organizer Rashyla Levitt.

The march began at Westlake Center at 3 p.m. Organizers and leaders spoke for approximately one hour before marching to go over  the goals of the protest and necessary safety information for all of those in attendance. Leaders made it a key point to implore protesters to stay peaceful and stated that should violence occur, they wanted everyone nearby to kneel down in order to expose the ones committing the violence.

Protesters then marched from Westlake Center to the Seattle Office of Emergency Management via 4th Ave before stopping and waiting outside the doors of the building. Seattle Mayor Jenny Durkan was inside of the building and the goal was to force her to leave the building and talk with the protesters, which was achieved after approximately one and one-half hours of waiting.

Mayor Durkan appeared to be open to working with the protesters and used the time to set up a meeting with Black activists and community leaders on June 3, the following day. She also answered a few questions from the crowd about the Seattle Police Department covering their badge numbers, to which she responded by saying that police officers were covering badges with black bands as a way of showing support for the 52 police officers who have lost their lives to COVID-19. Durkan went on to say that despite the good intentions, she would work with SPD to make sure badge numbers are visible and displayed clearly.

Although many of the protesters did feel that Mayor Durkan was not specific enough and was too general in her remarks, she was clear on how she felt about the protests.

The march then continued toward Capitol Hill until coming across a different protest at 11th and Pine. Although Levitt’s protest was fortunately able to stay peaceful and avoid any confrontation with police to this point, the second group was lined up against a barricade of police in riot gear and supporting National Guard members.

Protests continued to be peaceful until approximately 11:30 p.m. when police used tear gas and flashbangs to force peaceful protesters at 11th and Pine to disperse.