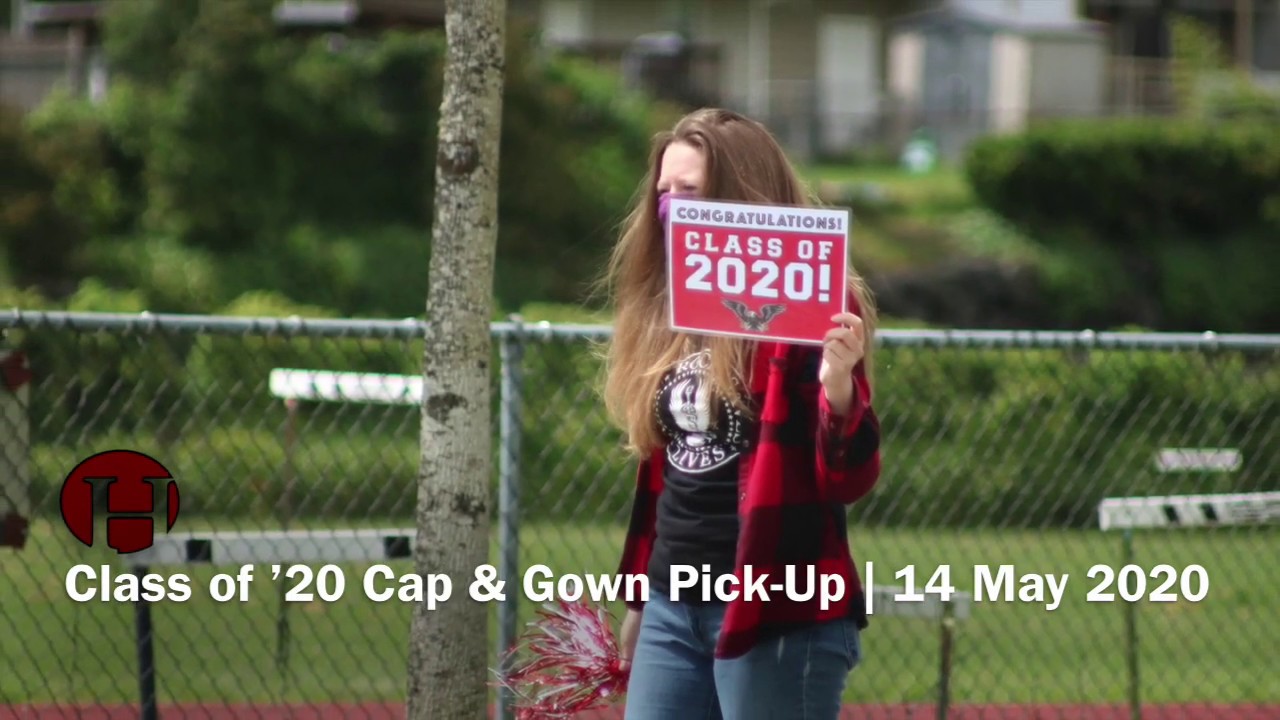 Nearly 300 Terrace seniors drove to campus on Thursday, May 14 to pick up their caps and gowns in preparation for the filming of their graduation ceremony. The graduation ceremony for the class of 2020 will be filmed on Wednesday, June 3. The footage will then be compiled into a video released to the community on the official graduation date of Saturday, June 13.

The seniors entered campus through the outgoing bus lane and drove up to the turnaround in front of the school, where they were checked in by staff members before their caps and gowns were delivered to their cars. Seniors also received all of the other senior gear they ordered in the fall, such as stylized thank you cards and customized tassels. Terrace staff members delivered these products to students through car windows or into the trunks of seniors’ cars.

As seniors drove away, dozens of teachers who had gathered in support of the class of 2020 waved at them from the sidewalk while holding signs congratulating them on their accomplishments and hard work. These teachers and staff members volunteered their time, and many were there from before 11 a.m. to after 2 p.m.

I told staff that cap and gown distribution would be happening and that they were welcome to come and offer their support for the class of 2020. Over half of Terrace staff were there for distribution, completely voluntarily, to cheer on the graduates. ”

Senior Jackson Freund feels that the cap and gown distribution was smooth and successful. He also appreciated the support from teachers that had taught him throughout his high school experience.

“The cap and gown distribution went very well, as it was quick and easy,” Freund said. “The teachers’ display was very heartwarming, and it felt great to drive down the road with all of their support.”

ASB/Activities Director Jeannie Brzovic helped to coordinate the cap and gown pick up event with National Achiever Services, which delivered seniors’ orders of caps, gowns and other graduate gear to the school.

“I was the lead person in planning the event, and I put together an outline for the event,” Brzovic said. “I searched online to see how different schools were handling the distribution of caps and gowns and met with building administrators.”

Brzovic believes that her skills in organizing, exhibited by her role as the MTHS activities director, allowed her to plan the logistics of the event successfully. Assistant Principal Dan Falk also played a large role in coordinating the cap and gown pickup, as he created the system by which seniors would enter and leave campus.

“Falk came up with the idea of seniors entering through the bus line at the back of the school so that the line of cars waiting to enter campus would not extend into the street and block traffic,” Brzovic said.

Brzovic was unable to officially organize the lineup of teachers cheering on the graduating seniors, as teachers were not allowed to work on campus during the week due to social distancing measures.

“I told staff that cap and gown distribution would be happening and that they were welcome to come and offer their support for the class of 2020,” Brzovic said. “Over half of Terrace staff were there for distribution, completely voluntarily, to cheer on the graduates.”

In addition to teachers, many paraeducators were at the event to ensure that it ran smoothly and direct the seniors through the process.

“The paraeducators were really the unsung heroes of the day,” Brzovic said. “Without them, the event would not have been able to function nearly as smoothly as it did.”

According to Brzovic, nearly 100 percent of the senior class was able to pick up their caps and gowns on the designated distribution day.

“There were only between 20 and 25 seniors who were not able to pick up their gear on that day, so we had them make arrangements with [Office Manager] Cathy Fiorillo to pick it up at a later date,” Brzovic said.

The event proved to be a success overall, as seniors picked up their caps and gowns in a safe, socially distant manner while receiving encouragement from teachers and staff members that they had come to know from their years at Terrace.