The rising generation of truth seekers 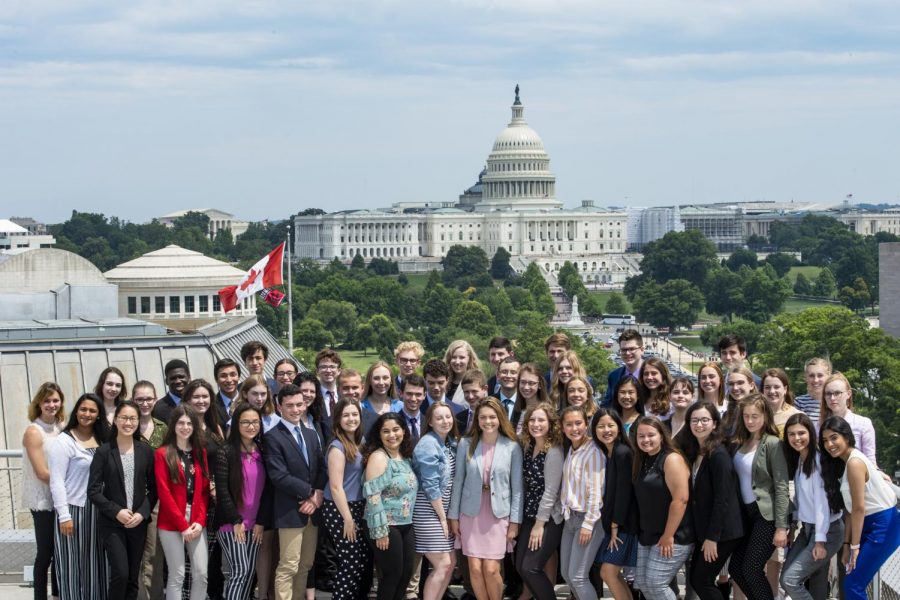 Courtesy of the Freedom Forum Institute

All 51 Free Spirit scholars pose for a group photo on the roof of the Newseum in downtown Washington D.C., in view of the U.S. Capitol Building. The Newseum was a central feature of the Al Neuharth Free Spirit and Journalism Conference and served as the site of many of the presentations and group activities in which the Free Spirits took part.

From the moment the plane took off, I was nervous. However, this was not particularly unusual for the occasion, as I always found myself somewhat anxious in the lead-up to national journalism conventions. The biggest surprise of the convention, though, came immediately after my plane landed at Los Angeles International Airport. Upon taking my phone off airplane mode, I discovered what was perhaps the greatest surprise of my entire junior year.
An email notification came across the top of my phone screen, alerting me in bold, capital letters that I had been selected as the Washington state delegate to the Al Neuharth Free Spirit and Journalism Conference. I felt tears of joy and pure excitement well up in my eyes as I felt that all of the work I had done over the past three years on the Hawkeye staff had paid off.
Each year, the Freedom Forum Institute awards one high school junior in every state and the District of Columbia the opportunity to attend the conference at the Newseum in the heart of Washington, D.C. The conference features speakers from some of the most respected media organizations in the country, including The Washington Post and NBC.
Two months after that revelation, I found myself on yet another plane ride. I packed my bags and set out to Sea-Tac Airport at 4:30 a.m., preparing to set out on my first solo trip across the country.
After saying goodbye to my family before going through airport security and arriving at my gate with just a few minutes to spare before the start of boarding, I noticed someone else wearing the same light blue t-shirt. The t-shirt, which had been mailed to me along with one of the packages sent to me by the Freedom forum in preparation for the conference, proclaimed our statuses as a 2019 Free Spirit scholars. I soon found that my companion was Idaho’s representative to the conference, and we discussed our excitement and aspirations for the coming days.
Landing at Dulles International Airport can only be described as a surreal experience. Ever since I had first acquired an interest in politics and governance, I had wanted to visit the seat of America’s government. Now, I finally had the opportunity to see the capital of the United States first-hand.
Well, the opportunity would arrive soon enough. First, I had to find my way through the unfamiliar airport, wait for the Free Spirits in my arrival group from other flights to arrive, and take an unexpectedly long van ride from Dulles to downtown D.C.
The conference wasted no time in getting underway. After the group of delegates I found myself apart of hurriedly grabbed dinner while the previous arrivals finished theirs, all of the Free Spirits were bussed to the Newseum, a place I would soon come to regard as a second home. Each of us introduced ourselves to the group by stating which of the First Amendment’s five freedoms we found the most important and why.
I made my way up to the microphone and proclaimed why I felt that the freedom of speech guaranteed by the First Amendment is the most important of those five freedoms. The freedom of speech, I argued, allows all people to participate in the free exchange of ideas that is necessary to maintain our democratic society.

After all of the Free Spirits had presented their answers, we were shown a video produced by the Freedom Forum that delivered one of the most shocking lessons of the entire conference. The vast majority of Americans cannot name the freedoms guaranteed to them by the First Amendment, which at a time in which the exercising of our democratic rights seems more critical than ever is profoundly disturbing.
Thus, the conference’s central idea began to grow in my mind. By the end of the conference, it had become more apparent than ever that America needs the next generation of journalists and truth seekers to exercise their First Amendment rights to the fullest extent.
If we are to solve the immense problems that face our generation and fulfill America’s promise of liberty, equality and justice for all, we must be fearless in pursuing truth and simultaneously knowing and exercising the full rights granted to us by our Constitution. Only then can we truly achieve the positive change that I know our generation has the passion for making.
In addition to the spectacular presentations, media figures and sights which the conference gave me, I found that among the most valuable aspects of the conference was the opportunity it gave me to converse with 50 of the brightest student journalists in America. I found myself relating to a wide variety of their concerns on topics ranging from the operation of student publications to the future. Due to the conference, I now have a network of friends and (potentially) future colleagues in every corner of the country from which I know I can always seek advice and consultation.
During our lunch breaks, we were given presentations from various individuals with insightful perspectives on journalism and exercising one’s rights to free expression. The most striking of these presenters were Freedom Riders Joan Mulholland and Ernest “Rip” Patton. During the 1960s, they joined hundreds of student demonstrators in exercising their First Amendment rights by riding on interstate buses in interracial groups and demanding their official desegregation. They both set a shining example for our generation to follow in demanding justice and the full rights guaranteed by our democracy for all citizens.
Finally, I got to witness the awe-inspiring monuments that compose much of the city’s center and surrounding areas. Many months later, the monument that still stands out most in my mind is the one dedicated to the late Dr. Martin Luther King Jr.
Dr. King stands arms crossed and surrounded by some of the most compelling quotes he uttered during his lifetime. The statue’s feet, however, have not been fully carved into the stone, representing the continued persistence on the part of citizens that is necessary to ensure his vision of an equal society is one day realized in its entirety.
So let us go forth and build an America that we can be proud of passing down to the generations that follow. As President John Fitzgerald Kennedy once said, “the torch has been passed to a new generation of Americans.” Let our generation take up that torch and bring the light of truth to the world.