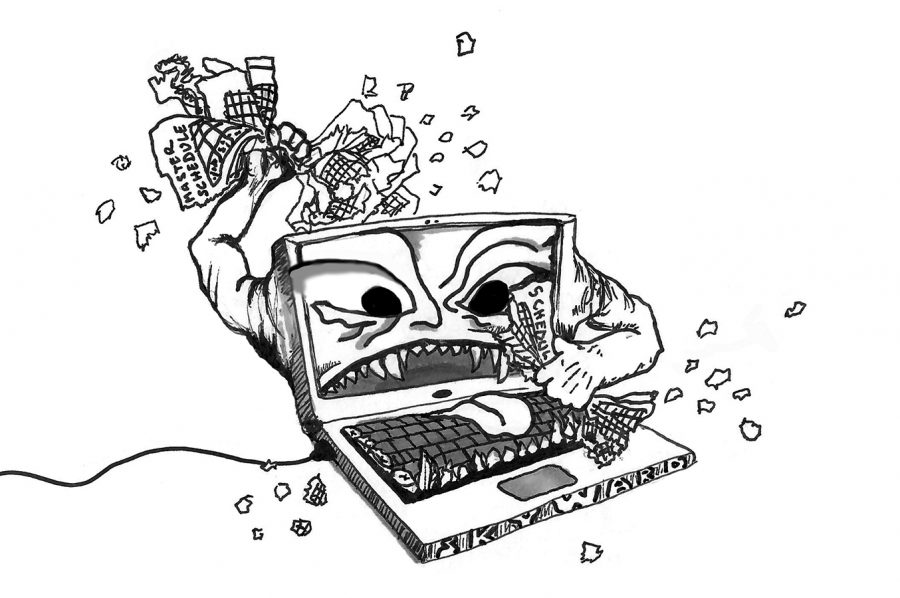 The use of Skyward to expedite the registration process ultimately backfired and caused chaos in the first few weeks of school. The system resulted in nearly half of all student schedules containing at least one error before the issues were addressed by the counseling department.

“I would say that about 50 percent of the schedules had errors in them,” she said.

During the Hawk Walk on August 28, concerned students flooded the already stressed counseling office, most of them attempting to request a schedule change.

“It got to the point where we had to ask everyone to fill out little slips of paper which we took to the counselors,” Christensen said. “They were then able to run them quickly and fix [student schedules].”

The problems were exacerbated by the constant shuffling of teachers’ working periods.

“We had some classes where the sections were switched. We added another science class or we had to move math classes around, different sections got moved. It made us have to [manually] get all the students out and move them to different periods, so that was a lot of shuffling around,” Hong said.

Students had until September 17 to change their schedules without any effect on their transcript. Up until then, the counselors had been actively working on the schedules.

“There were quite a lot of schedule changes. We have probably been working on [them] for  a whole month! Two weeks before school started and then probably two weeks after school started,” Hong said.

Hong wants the community to know that the counselors worked very hard during the situation to make the schedules fulfill the needs of students.

“The beginning of the year is the busiest time of the year. Students and teachers [should] be mindful and just realize that we’re doing the best we can. We’re working on weekends, we’re working after hours to do what we can to complete the schedules,” she said.

Class of 2022 ASB President Kerensa Suzara was given two PASS classes but was not abashed and quickly fixed the problem.

“I was marked absent whenever I went to my second PASS class, but it wasn’t a big deal because that teacher would later take me out of their PASS class so there wouldn’t be any further issues,” she said.

Last year, the counseling department moved forward with a plan to have students sign up for their classes on Skyward. The new method did not encounter any major issues at that point in time and did not receive any major criticism from students at the time students utilized it to register for this year’s classes.