Step up for Trade UP 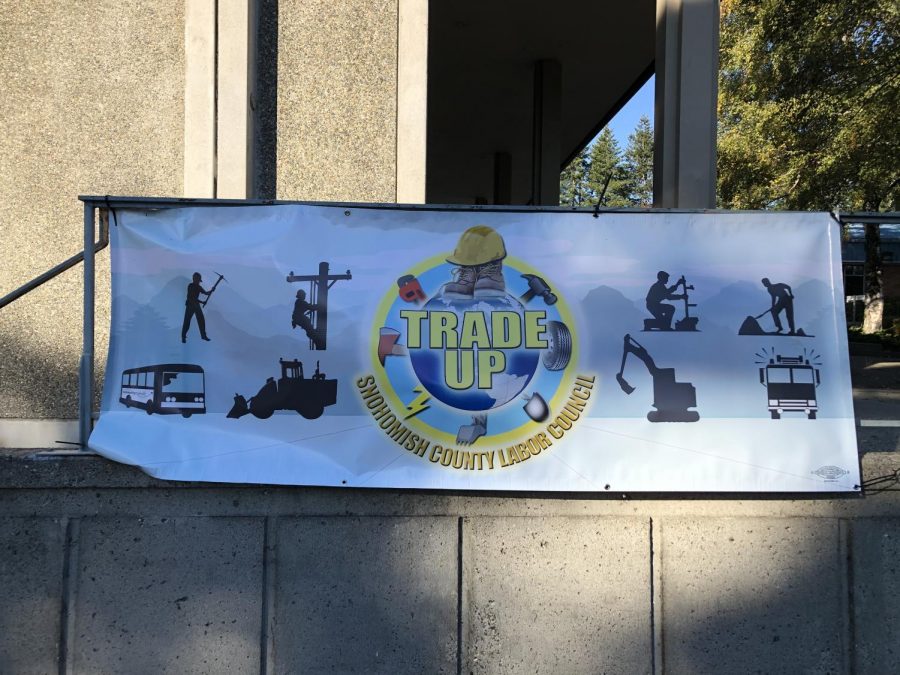 It’s that time of year when high school students are filling out college applications and filing their FAFSA. There are many useful events to help students through the college admission process, including everything from college representative visits to special presenters who teach families how to fill out their student’s FAFSA.

However, not all high school students want to go to a college after graduation. Some students may want to go into an apprenticeship and begin immediately developing their career skills. While there is much support available for students going to college or the military, not many events cater toward students with the desire to pursue a trade. As a result, among some people there has developed a negative stereotype when it comes to students planning to enter an apprenticeship.

“One of my frustrations is that even though almost all trades require a solid foundation in math, communication skills and being able to read a variety of things like building plans, some people view it as a step down from a college degree. Every single person [presenting at Trade UP] is a professional with credentials,” Susan Beard, Career and College Readiness Coordinator for the Edmonds School District, said.

Hosted by ESD in partnership with the Snohomish County Labor Council, Trade UP is an event aimed at introducing vocational jobs through interactive presentations from professionals. High school students from all grades and high schools in the district participated in the full-day field trip. This year’s Trade UP field trip was held on Thursday, Oct. 10.

Students were divided into groups, and individuals received a time card in which they clocked in and out of various stations. As the day wrapped up, students handed in their completed time cards for pay, in which students received a $10 gift card to Fred Meyer, paid for by the Foundation for Edmonds School District.

Overall, Trade UP has gotten a lot of positive feedback and helped students reevaluate what they would like to do after high schools, opening their eyes to options they had previously not considered.

“I was initially wanting to work in HVAC, but now, I’m considering carpentry and a 911 call center. It doesn’t hurt to at least look into a trade career,” senior Sophie Stelmack said.

Even though Trade UP is a first for ESD, this is the fifth year the Snohomish County Labor Council has organized a Trade UP event.

“Several things [gave me the idea for Trade UP]. One was hearing about the shortage of workers coming into the trade. People were waiting until [they were] 27- or 28-[years-old],” Leonard Kelley, Snohomish County Labor Council’s Secretary Treasurer and Mayor of Stanwood, said.

Kelley’s goal for Trade UP is to be a place to showcase other options for students coming out of high school.

In partnership with Barbara Tolbert, Mayor of Arlington, the first Trade UP event was organized by the Snohomish County Labor Council and held at Arlington Municipal Airport during spring break.

“The responses we got from the students were, ‘Oh, man. This is so much better than a job fair. I learned so much more [than at a college fair],’” Kelley exclaimed.

With a positive response, Kelley continued to organize Trade UP for the Marysville School District, Everett Public Schools and eventually ESD.

“I really want students to understand that it’s not a step down to be in the trades,” Beard added.