How about a cup of self-respect with a side of decency? 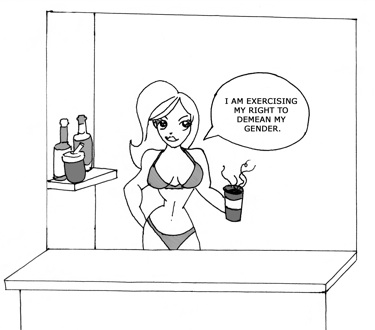 As some of you may have noticed there are a few coffee stands down the street from our school. One such coffee stand is the Blendz bakini barista stand. This bikini barista stand is an absolute disgrace. Not only is it degrading to women, but right down the road from an educational building full of young adults.
After a very entertaining interview with one of the nineteen-year old baristas, it could not be clearer that this coffee stand is entirely immoral. When asked about what her family thought about her job, all she could say was: “they don’t know, because they are really religious.” It was obvious why the barista did not want to tell her parents, because it is wrong to sell her body to desperate men. She also had a boyfriend who did not want her working at the stand.

Besides the fact that this coffee stand being all around degrading for employees, it is just down the street from a high school. Students constantly have to drive and walk past the stand to get home or to school and it sickening for the students who do not want to see a half naked woman standing by a full body length window on their way to school. The Blendz coffee stand reveals their employees, allowing the little kids in the back of a car, to the old married men to stare in and fantasize.
After ordering a tall iced caramel macchiato from the stand for four dollars, and then comparing it to a Starbucks equivalent for three dollars, it was obvious why the coffee stand tries to use hardly dressed women to gain customers. The coffee from the Blendz stand was smaller than the Starbucks coffee and it did not taste as good as the Starbucks coffee.
These stands are a bad influence and are destroying the minds of men. They are corrupting society and turning it into “a man’s world.” It is disgusting to watch all the women give up their dignity so a man can have his thrills.