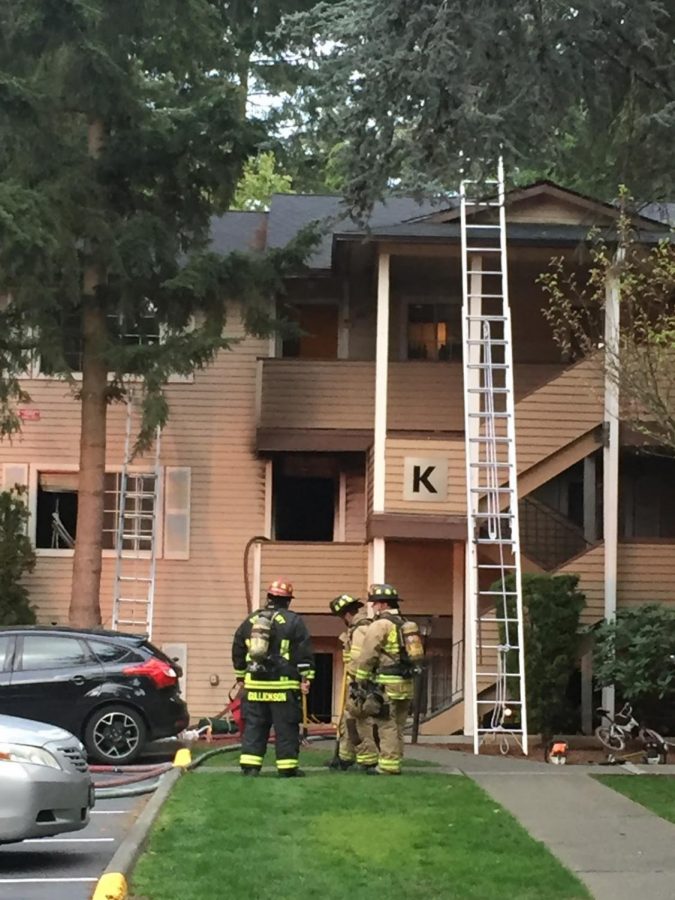 Firefighters gather outside the apartment unit that was the source of the fire.

Around 7 p.m. on Thursday, May 2, an apartment caught on fire at Millwood Estates in Lynnwood. Minutes after smoke detectors and fire alarms went off, residents inside the building evacuated and first responders were on their way. From a distance, there were no signs of fire or smoke except for the side of the door with burn marks. Once three fire trucks, a command unit and a paramedic unit arrived at the scene, they got to work immediately and used hoses to put out the fire.

When firefighters busted open the door to the singular apartment that was the source of the fire, black smoke rushed out quickly from the unit. There seemed to be no visible sign of fire on the exterior of the building, suggesting that the fire was either inside the apartment near the back, or already put out. Nonetheless, firefighters immediately hosed down the apartment until the coast was clear for entry. Firefighters worked fast and efficiently to put out the fire within 10 minutes of arriving from the Martha Lake, Snohomish and South County fire departments.

According to public information officer Leslie Hynes, the only person present at the scene, a young Asian female, was inside the unit at the time of the fire and sustained critical injuries.  She was admitted to Harborview Medical Center in Seattle after being seen coming out of the building with black soot covering her body.

The fire was contained due to all the doors and windows being closed when the fire started, ensuring it wouldn’t spread to nearby units. The unit above the source apartment suffered smoke damage while the unit below got additional smoke and water damage and the unit where the fire started suffered heavy fire damage to the living room, smoke damage to the hallways and kitchen, water damage and electrical damage that affected only that unit.

Louiz Nascimemto, a Millwood Estates resident from the apartment up and to the right of the source unit, described what happened from his point of view.

“When people came and knocked on my door I saw dark smoke coming out of the building and everyone go down,” Nascimemto said. “I grabbed my documents and family and got out of the building. I was actually very calm and I didn’t really care.”

Other bystanders and residents were relatively calm as well.

As the situation progressed, more and more bystanders gathered outside the building to watch. News channels Q13 and Kiro 7 were also present at the scene.

A similar situation occurred in the same building back in 2011 when a unit caught on fire, resulting in half of the building being burnt and necessitating the reconstruction of that building.