New district bus policy may save money, but is unfair 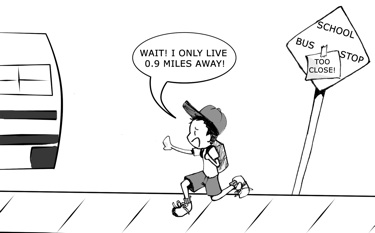 Approximately 3,000 students in the Edmonds School District were left searching for other means of transportation to school this year as the news of the loss of state funding for bus services was spread. Families living within a one-mile radius of their child’s school received a letter in June, stating that “you live within a one-mile radius of your student’s school, which is recognized by the state as a no-bus-service zone.” This part of the budget cuts for the 2009-2010 school year is said to “free up approximately $500,000 annually that can be used to support students in the classroom.”
The district offers up other means of transportation, such as walking to school, a parent driving them to school, or walking to a bus stop outside of the one-mile radius. But is this fair to those thousands of students left behind? “They come through the one-mile zone, so why don’t they pick the kids up along the way?” states junior Joe Muriekes. Bussing kids who live miles from the school is reasonable, as

they would have little to no other means to get to school, but to pass up the many students who live a reasonable distance from the school seems unfair. If they are in a direct route, why not pick them up as well? Here’s another suggestion: why not make the radius smaller?
Michael Ward, senior, states “getting kids to school is a necessity.” The President of the U.S. ispushing to get more kids to go to school, as an education is probably the most valuable thing you can have in this country. And with budget cuts, we are making it less possible. What about the students who were reliant on the bus services? School should be made more accessible to students, not harder to attend, and what good is saving funds to support the students if we are taking away the one main source that gets them to school? None whatsoever.
While Ward states to the opposing side, he also adds, “that’s fine and dandy for me, cause I drive to school.” There are indeed many students that already drive to school, and many who also already take community transit or get a ride by a parent or with friends, as well as still take the school-provided bus. For these people, the one-mile rule does not affect them. However, everyone should be concerned for the students who are affected. And who says that more won’t be affected as time goes on?