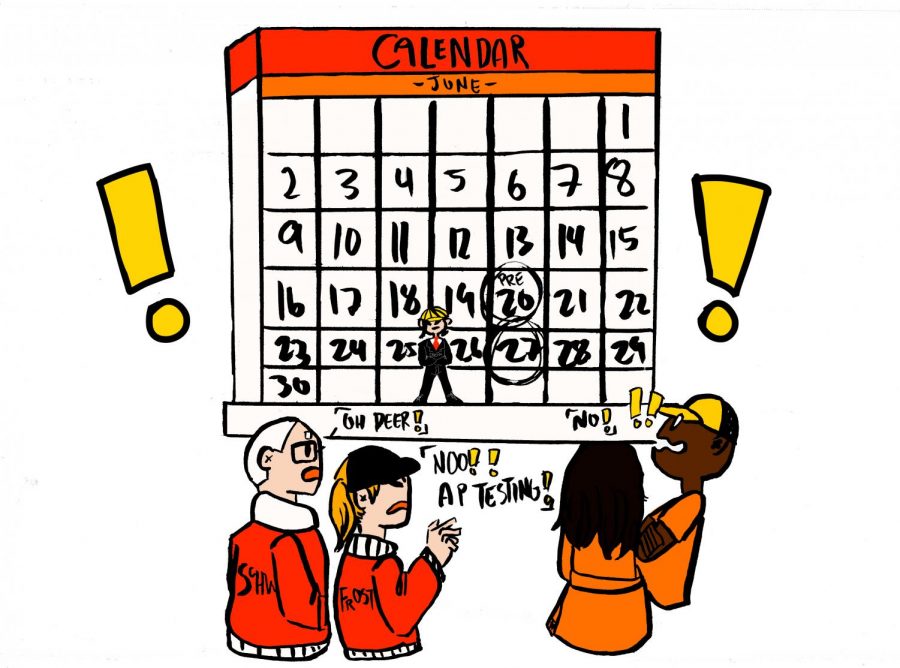 Cartoon versions of Assistant Superintendent Greg Schwab and social studies teacher Amy Frost, along with a couple of students, are taken aback by the new school days being built onto the end of the year.

Families found themselves stuck indoors during most of February due to the winter storm dubbed the “snowpocalypse.” As a result of the handful of snow days, the school year is now set to end on Thursday, June 27, the fifth snow make-up day.

It could have been worse.

The graduation dates throughout the Edmonds School District (ESD) are unaffected, but additional instructional time will be added for all classes. The third quarter will now end on April 12 rather than on March 29. Additionally, May 10, originally a non-student day, has been changed to become a full school day.

These proposed changes are contingent on the ESD receiving a waiver day from the state. Because the ESD canceled school during the state of emergency issued by Gov. Jay Inslee caused by intense winter weather, public schools can apply for a waiver that would give them the opportunity to remove a make-up day.

Assistant superintendent and former MTHS principal Greg Schwab is making efforts to obtain that waiver so the school year does not intrude on students’ summer vacation.

“It’s trying to balance that—making sure we meet the state minimum requirement for instructional hours, but also recognizing that families plan their lives around the school calendar,” he said.

Washington state requires school districts to have 1,028 hours of instructional time across all their schools. The ESD has just over 1,048 hours scheduled this year, so Schwab believes they can waive at least one snow day.

Staff and students gave mixed responses in the midst of the snow. An informal poll conducted on the HAWKEYE Instagram found that 42 people out of the 90 respondents thought having snow days was worth the make-up days. In other words, a little less than half of the MTHS community on Instagram would like school to be canceled in the snow, even if it means extending the school year.

Freshman Damaris Torres believes the ESD “did the best they could or knew how” in determining snow days.

“I think the number of snow days was a little excessive, but personally I didn’t mind them because it was a break,” Torres said.

Lynnwood High School social studies teacher Amy Frost, formerly a teacher at MTHS, found it appropriate for the snow days to be called. She believes “student and staff safety is a top priority,” but now struggles to keep her curriculum on track.

“It’s making me have to make the decisions about content that I might teach differently or speed through a little bit,” she said.

As an Advanced Placement teacher, Frost worries if her students will be ready for the national AP exams in May, which can grant college credit.

“[Students] have to be more responsible for their own reading and learning. We have all of that time after the AP test which is really not useful in terms of helping them perform on the AP exam,” Frost said. “For me, as much instructional time as I can get prior to the AP exams in May, I would be happy with.”

Schwab agrees that education may take a hit from the lack of school, but he thinks students can catch up.

“Any time you miss this much school, there are gaps in instruction and teachers have curriculum and content they have to cover. How do we get back up to speed again and get running as quickly as possible?” he asked. “I think we will and it’s gonna take some time.”

Just days before the “snowpocalypse” hit the area, Schwab sat back and thought the ESD would “escape the year without a snow day.”

“This is pretty amazing,” he said.

In fact, the National Weather Service noted that Seattle has never seen this much snow in February since 1945.

Because the Puget Sound area doesn’t typically receive large amounts of snow, the ESD has a limited supply of tractors and snowplows on hand. They contracted with private companies to clear snow from schools. In these inclement weather conditions, district workers helped de-ice and plow roads. Above all, the ESD determines snow days based on accessibility and safety.

Some students and parents expressed both praise and concern for the snow day decisions on social media.

“Maybe spacing them out across the rest of the school year instead of packing [make-up days] into the end,” she said.

“Having some of the snow days built into the calendar would be nice,” she said. “I’ve never really liked that we add all of our snow days at the end because we get out late.”

She has a friend who teaches in Michigan, where snow is more prevalent. Frost is interested in their work-from-home process that eliminates the need to add more school days. This approach is possible for the Michigan school district in which her friend works because all students have a district-issued laptop, similar to the ESD.

“They aren’t making them up because their district is a one-to-one district, so teachers are expected to put up a lesson plan or have a lecture, and students log in and do some work, so we actually are teaching and learning,” Frost said.

Over time, the ESD has implemented more ways to relay the message about school cancellations or delays.

“The goal is to put out the notice as many ways as possible,” Communications Specialist Kelly Franson said.

The superintendent makes the snow day decision based on recommendations from a team consisting of the transportation service director and bus drivers, as well as members of district facilities and the operations department. The Communications and Public Relations Department at the district then sends out snow day notices through emails, phone calls, texts, social media and local news outlets. Franson said there’s only a 10-minute turnaround from the PR department learning about a snow day to notifying families in the ESD.

For Torres, she would have liked to received the snow day alerts more in advance and thinks there is room for improvement.

“I think giving us a heads up earlier in the day would be really good,” she said. “Sometimes it was pointless to call a half day [when] we could have just had no school.”

In the meantime, the ESD is working on incorporating additional school hours for seniors to attend after graduation. However, it’s not the first time the ESD is offering extra school days.

“I think we had to do this in 2006-2007 when we had a bunch of snow days. We had to offer days for seniors to come back after graduation,” Schwab said. “We had to at least make it available for students.”

As he was MTHS principal at the time, Schwab doesn’t recall too many seniors returning for that opportunity.

Now, the ESD is looking to receive a response about a snow day waiver.