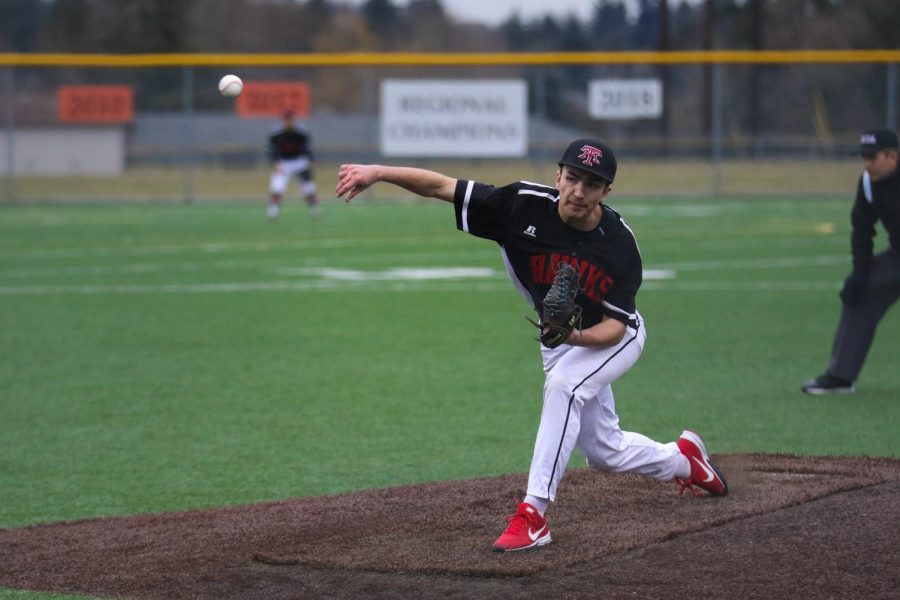 Pitcher Kasey Boe throws the ball in the game against Arlington.

By Benjamin Eyman, Co-Editor in Chief

Nothing seemed to go right for the Terrace Hawks baseball team as they fell to the Arlington Eagles 11-0 in the home opener Monday night. The game, which was mercy ruled after five innings, seemed to end the suffering for the Hawks who got nothing going all day.

Senior Dillon Gordon started the day for the Hawks on the mound but was chased after three innings. Gordon took the loss and fell 0-1. He gave up four runs on four hits with three of them being earned. He also struck out four Eagles and walked two in his time on the mound.

Junior Kacey Boe came in relief for Gordon to start the fourth inning. Boe pitched two innings and struck out, too, but gave up seven runs with five of them being earned at the same time. The Hawks’ itching struggles were matched by cold bats as they only managed one hit in the outing that came off the bat of sophomore Ethan Dunne in the first inning. Not only were the bats quite, but the Hawks only managed three baserunners all game.

All of the frustration for the Hawks came from Arlington’s junior pitcher and center fielder Owen Bishop. On the mound Bishop was dealing, he struck out eight Hawk batters in just three innings of work. He allowed only the one runner, which was Dunne. Not only was he dealing on the mound, but his bat was as potent as the rest of the Eagle team.

Bishop went 3-3 at the plate with a walk in the fist, a home run to left center filed in the third inning, and two doubles in the fourth and fifth innings.

The Hawks fall to 0-1 on the season and the Eagles improve to 1-0. The Hawks will look to bounce back at home Tuesday, March 12, verus the Marysville-Pilchuck Tomahawks. First pitch is at 4:oo p.m.