Ari Hoenig Trio returns for a night of rhythm 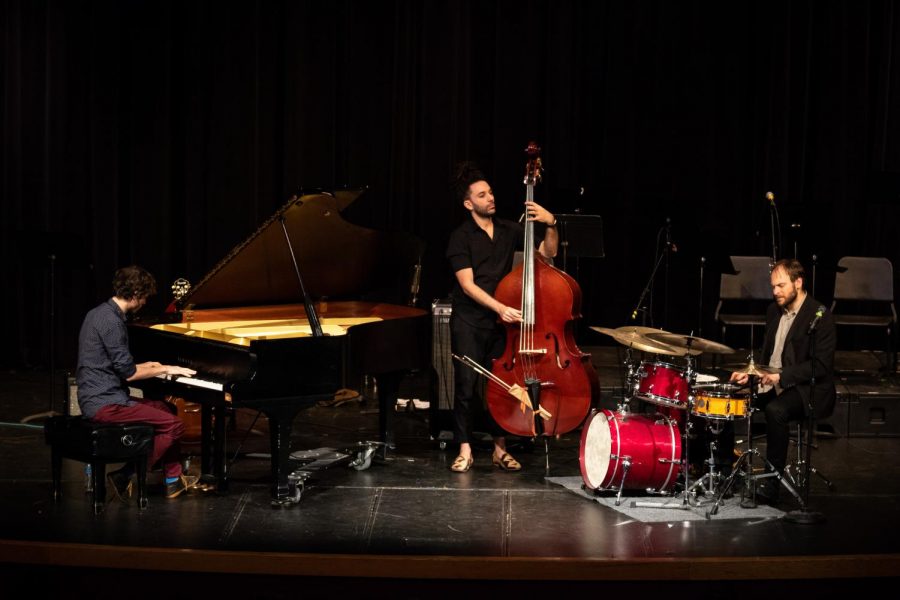 The MTHS theater hosted drummer Ari Hoenig and his trio, featuring pianist Nitai Hershovits and bassist Or Bareket, for the second time on December 4.

The night began for jazz students right after school ended, where they reported for rehearsal with Hoenig, Hershovits and Bareket to parse out how exactly they would perform their set. To some, this may seem last minute, but it’s common practice for jazz students.

“Jazz music is fundamentally driven by improvisation, and the sense of urgency in a last-minute rehearsal encourages students to develop their artistic intuition,” Jazz 1 drummer Kieran Faris explained.

The concert itself began at 7 p.m., opening with a performance of “Rockabye River” by Jazz 2. A swinging jazz standard, it featured solos from freshman Eli Faris on the trumpet and senior Daniel Leavitt, who channelled legendary saxophonist Johnny Hodges. As drummer Justin DiCioccio, who gave a clinic at MTHS two weeks ago,  said, the song featured the “big jungle drums” characteristic of Duke Ellington, laid down by junior Jazz 2 drummer Nathaniel Jennings.

Next was a quasi-latin piece, called “Moon Over Cuba” on which Hoenig, Hershovits and Bareket switched out with the students on their respective instruments halfway through. Ryan Baca and Emily Sallee on tenor sax and Sophie Stelmack on the trombone rounded out the student solos.

Afterwards, MTHS’s award-winning Jazz 1 performed. They began with a Duke Ellington song titled “Magnolias Dripping with Molasses”, a sporadic, dense, and layered song meant to paint a picture of the South — intended to portray a place and evoke a feeling in the way Ellington often did with his compositions. This piece featured junior Ernesto Torres on trumpet, junior Owen Moreland on clarinet, and senior Henry Smith-Hunt on trombone, all of whom played solos full of character, charm and charisma. Sophomore pianist Natalie Song also showcased a beautiful performance, full of life and expression.

Then was “Little Pixie”, a Thad Jones tune with horn solos from Torres, Caden Hargrave, Ben Leonard and Solomon Plourd. Unique to this performance were the piano, bass, and drum solos. Natalie Song and Nitai Hershovits traded places every eight measures – eliciting some impressive gymnastics as they each tried to get to the piano bench in time. Andrew Vinther and Or Bareket had an interesting dynamic—Vinther’s fingers were flying, and Bareket added playful call-and-response. Their on-stage behavior of concentration gave the impression of thoughtful teacher and motivated student. Hoenig and Kieran Faris tag teamed a communicative and polyrhythmic solo flush with technical skill and an impressive ear for internal subdivision. After their marathon solo, the band finished cohesively, and nailed the difficult, rhythmically abrupt ending.

After intermission, the stage was given to the Ari Hoenig Trio. Particularly impressive is the tacit communication between the three artists. Unpredictable rhythm changes were met with grins and handled masterfully. Hoenig’s pieces are spasmodic, and almost unsatisfying in a way that leaves one yearning for more.

The way each member presents themselves on stage hints at their own methods of focus. Hoenig, with his exaggerated expressions brimming with passion. Bareket is calm and cool; his nods and casual gazes make the moments in which he unleashes firework displays of technical skill all that more jaw-dropping, because he makes it look so darn easy. Hershovits’ eclectic body language and boyish smirks belie the virtuosity he possesses. He does not look at the piano keys. His eyes are only on the other musicians as he builds off of them.

Not much was said during the performances, other than a few emphatic exclamations, but Ari did occasionally pause to say a few words or introduce a song.

“I’m having a great time. It’s great to work with these students for the second time in really, a year,” he said.

This year was unique, in a regard. This was the first time Hoenig held a workshop. Last year, it had just been a performance and the accompanying rehearsal, but on Tuesday, Hoenig held a rhythm workshop—to expound upon to the Jazz students something that he is so incredibly skilled with.

“It was a great experience, I hope we can have [them] back in the future, “ said Jazz II tenor saxophonist Ryan Baca.

It shed a bit of light on something that can be incredibly hard to grasp for many. When listening to Hoenig’s compositions, one is often compelled to tap their toes, but is often unable to due to the complexity and depth of the rhythm.

His song “Irish Gollum” demonstrates this. It was characteristically reflective, mysterious and dynamic. Live performance was essential to the experience, the intensity palpable in the room and evident on the trio’s faces. “Irish Gollum” evoked feelings of rolling hills, with a twinge of something other-worldly, thanks to Hoenig’s melodic drums, Bareket’s exotic bass, and Hershovits’ unique and slightly melancholy phrasings.

Each performer got a chance to shine in Tuesday night’s performance. One song began with a solo from Bareket. The influence of Bareket’s varied experience shone, his use of harmonics adding multidimensionality. The strength and purity of his tone was powerful enough to reverberate the nearby snare drum, creating an indescribable sound that perfectly complemented his performance.

On the next song, Hershovits improvised a beautiful introduction. Occasionally, he would reach into his piano and pluck the strings, adding texture, angularity, and a satisfying dissonance to his solo. It sounded like an orchestra tuning up—a cacophony, until a melody eked itself out and the rest of the band sprung into action.

It is an understatement to say that these people know each other incredibly well, and that their understanding of their instruments is on an entirely different level—above that which is safe or conventional, eliciting feelings of ineffable poignancy.

Two more highlights of their set were “Alana,” a beautiful ballad, written for his daughter, off of Hoenig’s album The Pauper and the Magician. Hoenig’s inventive use of brushes is worth noting. He didn’t just stick to traditional sweeping, he tapped, rolled, and flipped, occasionally utilizing the drum set’s hardware when he wasn’t satisfied with the noise of drums alone. This created a rich, full bodied, and textured sound.

Hoenig took another pause to introduce the next piece.

“This song was inspired by my favorite hobby when I’m at home—which requires a great deal of concentration—sitting on the stoop,” he said.

It was entitled “Guernsey Street Gooseneck,” and its bouncy, syncopated sound gave the impression of being surrounded by one’s own changing thoughts and the hustle and bustle of a city.

After their set ended, both jazz ensembles joined the trio onstage to finish off the night with a performance of “Arrows and Loops” from Hoenig’s album Lines of Oppression. It gives an introduction to Hoenig’s complexity—the song is written in 11/8 time, which is far from the 4/4 or ¾ time signatures considered conventional.

At the day’s rehearsal, the ensemble was committed to getting Hoenig’s sound right, and with the man there himself, it was an enlightening experience. The song was a beautiful effort from everyone involved, and was a perfect end to a night full of musical skill.