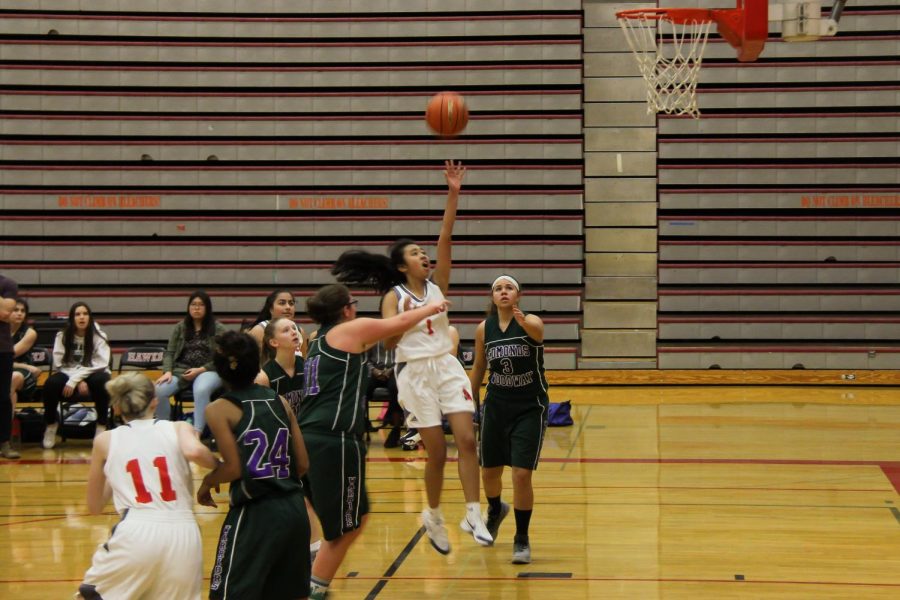 By Benjamin Eyman, Co-Editor in Chief

A stunner at the end of the women’s basketball game with the Terrace vs. Edmonds-Woodway C-Team: freshman Warriors guard Kate Schimpf hit a 3-pointer with 6 seconds left on the clock, propelling the Warriors to a 23-22 win over the Hawks. After the game it was noticed by parents, coaches and fans that the ball was shot from the free throw line–nowhere near the 3-point line. But the call stood, costing the Hawks the game.

Freshman wing Taylor Stevens of the Hawks led all scorers with 12 points, including going 6 for 8 at the free throw line. Gwyneth Camacho, also a freshman, added 5 more points, with freshman Gabrielle Garberding and sophomore Hana Amanuel scoring 2 points, and freshman Jazmine Garza chiming in with a point of her own.

The Warriors were led by final shot maker Schimpf, who had 11. Sophomore guard Braunte Beeks scored 6 before fouling out. Freshmen Lindsey Kerns had 4 and Naturelle Hansen had 2.

Both teams were in foul trouble most of the game with a combined total of 31 fouls. The Hawks did not have any players foul out, while the Warriors had two.

With this victory, the Warriors advance to a 1-1 record this season, while the Hawks fall to 1-1. The next game for the Terrace C-Team is Thursday, Dec. 6 in the Terraceum. Tipoff is at 5:30 p.m. versus Mariner.