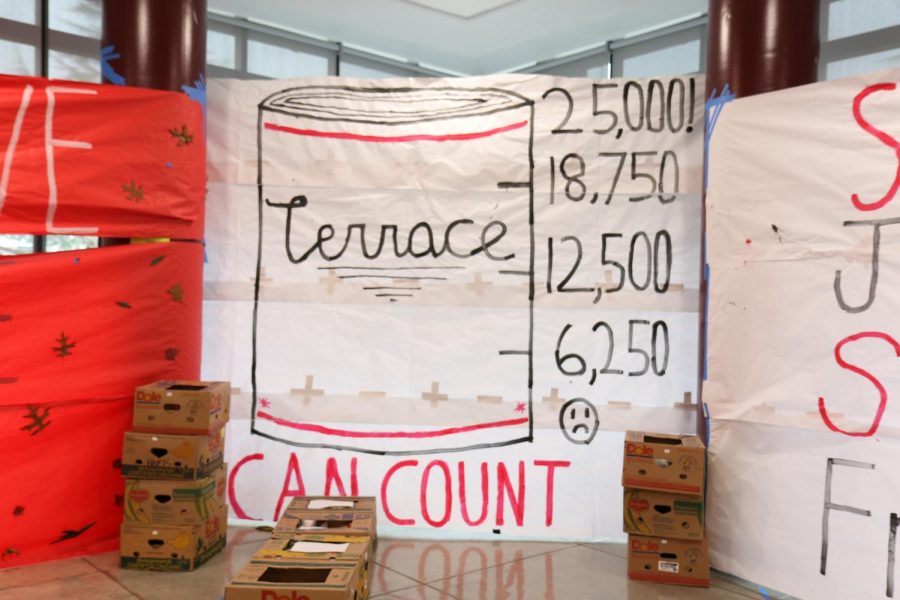 Everyday until the food drive ends, Executive ASB Secretary Bruno Porras will update a poster for the food drive that marks every 6,250-can checkpoint until the school's goal of 25,000 cans is reached.

During the month of November, students will find that the back of the HUB is blocked off for the annual food drive organized by the Associated Student Body (ASB). Throughout the month students can watch that area fill up with boxes full of canned and boxed foods donated by MTHS students, staff and community members. After school, it is a common sight to see ASB officers tirelessly count out food donations, track which class donated each item on large posters painted by ASB and update the donation numbers.

Each November, the MTHS ASB organizes a food drive for the Concern for Neighbors Food Bank in Mountlake Terrace, which services an estimated 100 to 115 local families per week. The food drive also functions as a competition between rivals MTHS and Lynnwood High School (LHS) to see who can collect the most cans of food for the food bank, and each year there is a reward for the winning school.

The results of this year’s food drive carry high stakes for Executive ASB President Andy Shaw: if MTHS beats LHS in food donations, his head will be shaved in front of a live audience.

Originally, the Executive ASB members of MTHS and LHS, and members of the Interhigh ASB from both schools, decided that the president of the losing school’s Executive ASB would have their head shaved. However, after receiving feedback from their school communities, ASB members at both schools decided that shaving the head of the winning school’s president would provide more of an incentive for their school communities to donate to the food drive.

The Executive ASB President of the winning school will have their head shaved at the annual Pursuit of the Power Plunger (PPP) basketball game. This game features the annual PPP competition, in which teams from both MTHS and LHS make contraptions out of various objects and race these contraptions by propelling themselves with a toilet plunger. The competition, scored based on the results of the races and school spirit shown at the competition, is intended to serve as a friendly competition between the rivals.

In recent years, LHS has beaten MTHS in the food drive competition—a trend that Shaw seeks to reverse.

“I’ve heard that in years passed, before I was in high school, we would usually win, but in the past few years Lynnwood has been winning,” Shaw said. “But we’re trying to change that this year.”

The food drive also serves as a competition between MTHS classes, and the class that donates the most to the food drive will receive $500 to their class prom fund. Students can donate to the food drive by bring cans of food or money to their class’s area at the back of the HUB or to their PASS teachers until Nov. 30. Throughout the month, class ASB officers will run donation drives in which members of the class stand in front of local stores and collect food donations.

The Executive ASB had originally planned to use the intercom system to provide an incentive to donate to the food drive, but they found that the intercom’s technology did not fit their needs.

“On the first week of November we were gonna play ‘Johny Johny’ for 30 seconds after fifth period until we got 2,000 cans, but we weren’t able to do that because the intercom system is 30 years old and if you can try and play your phone [through the intercom] the audio is terrible,” Shaw said.

Shaw has increased ASB’s food can donation goal this year.

The ASB donation drives outside local stores were great sources of donations previously, but this year, it has been more difficult to organize those events.

In terms of specific roles, Shaw is in charge of counting the cans after school each day, Secretary Bruno Porras will update the poster in the HUB with accurate figures for the amount of cans each class has donated and Public Relations Officer Andy Nguyen has been tasked with advertising the event.

The food drive will end on Nov. 30, but is subject to change depending on the circumstances at the end of the month.

“In years past we’ve had [the food drive] go into December, and if we see that by the end of November maybe we don’t have as many cans as we were expecting, we might talk to Lynnwood and try to change the end date to a later time,” Shaw said.