The first month: A look into Ethnic Studies 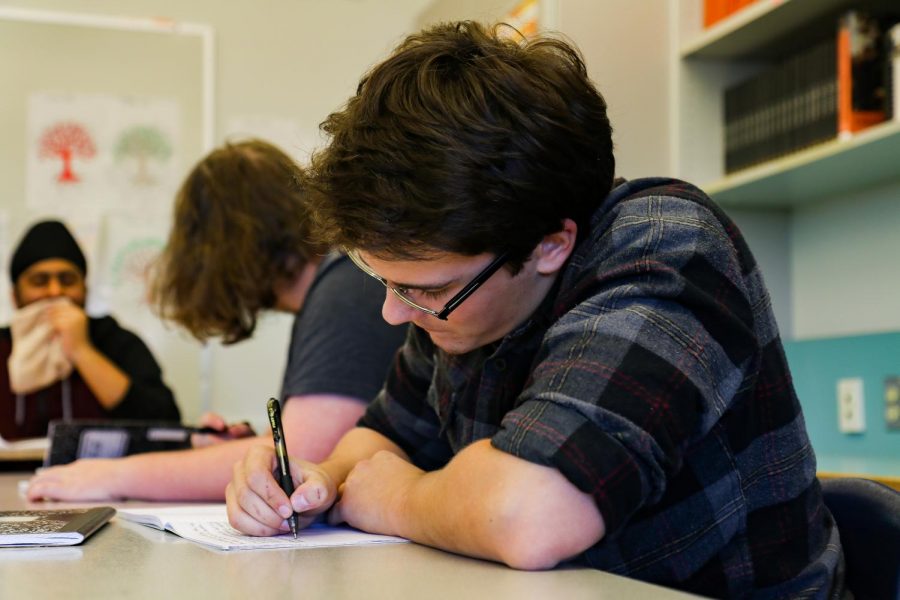 Senior Cole Goodnight works on his assignment in Ethnic Studies.

Ethnic Studies is a new class being taught at Mountlake Terrace High School (MTHS) this year. The class teaches students about different cultures around the world, and it is taught by Erin Grambush and her student teacher, Nazia Junejo, in periods 4, 5 and 6. Ethnic Studies is available to seniors and can count as their senior social studies credit.

Grambush believes that the first month of the new class went well. “We spent a lot of time developing norms and building this sense of a question community,” Grambush said. What Grambush means by a question community is a more open and interactive class. You can ask questions without being judged.

The class flowed more slowly than Grambush wanted, but she is getting a hang of it and plans to pick up the pace in the next month. Both Grambush and Junejo feel that teaching this class is fun.

“We feel like we have good experiences to bring to our classroom and [hope to] provide explanation and definitions for terms that we are introducing,” Junejo said.

The main goal of the class is to embrace everyone’s culture and introduce students to the history of other cultures. This quarter, the class focused on three main ideas: who you are, what you bring to the classroom, and what you have to offer that most people don’t see as a positive. The class focuses on these topics and how they all tie to racial identity, class identity, gender identity and privilege.

“The class is a conversation, so the students digest the information we give them and we see that, yes, they got it and we should move on, or whether they got it or not, so it’s very much an assessment,” Junejo said. “That’s what creates the next lesson plan”.

Future plans for the class will revolve around racial identity and embracing your culture in a place that doesn’t embrace it. At the time of writing, the class is learning about cultural wealth, which is the knowledge of other cultures’ practices and beliefs.

Grambush and Junejo are very excited for the future of this class and the development of more diverse activities at MTHS.

“It’s student centered, student-based and they’re the ones who made it happen,” Grambush said.