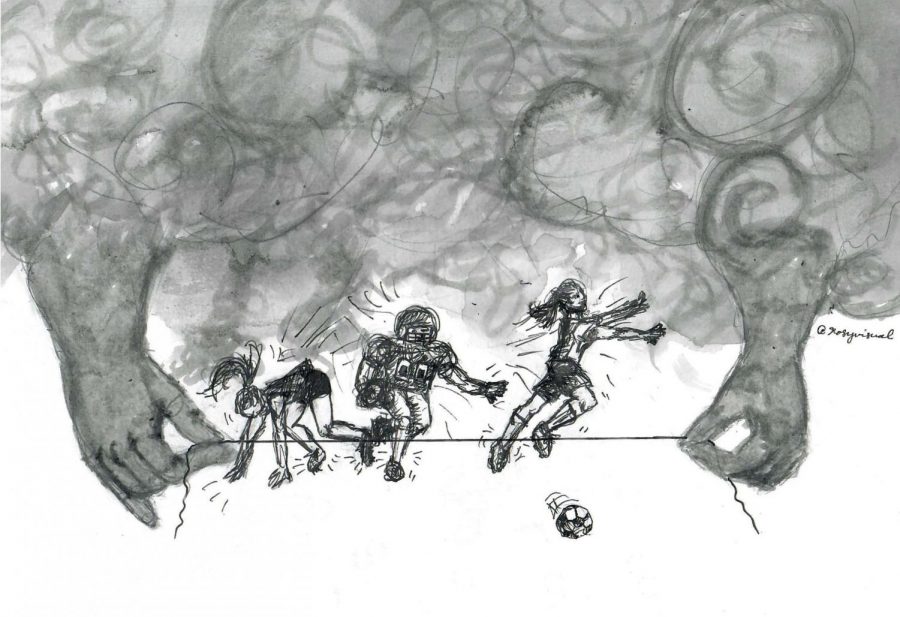 With forest fires raging from Canada and all over the west coast, the Pacific Northwest fell victim to a layer of hazardous smoke. On Wednesday, Aug. 22, the air quality was so poor that local news station KING 5 reported breathing the air was equivalent to smoking several cigarettes. And with the school year starting, poor air conditions affected fall sports during their pre-season practices.

Football, soccer, tennis and cross country are all sports that would normally practice outside, but considering the smoke, they had to either suffer through the poor air quality, or go inside. On Tuesday, Aug. 21 and Wednesday, Aug. 22, all practices were either cancelled or brought inside by the Edmonds School District.

Although the district did make athletes practice inside those two days, there were still days they practiced when the air quality was not as bad. When talking with the athletes about if the smoke affected them when they were out practicing, most said they didn’t notice anything different when it came to sports performance.

“I personally did not feel affected by the smoke at all during cross-country practices and when practices were cancelled, I ran alone with no problems,” said senior cross-country runner Charles Fritz.

When it came to practicing, players on the women’s soccer team mentioned that they didn’t feel like they were affected by the smoke because they were inside, which made them able to work on things that they may not get to work on if they were outside.

“I feel like the smoke didn’t really bother us because we were inside. The only time it really affected us was when it was burning our eyes during a light practice outside,” senior Mattie McAllister said.

Another problem that came with the poor air quality was the fact that the teams were limited to what they were able to do when they were inside.

“We spent three or four days just practicing and running in the gym, which was great, but our practices could have been much more effective outside,” senior tennis player Andy Shaw said.

Even if the people in these sports did not feel any effect on their performance, inhaling the air in general is not healthy for your lungs. The Washington Department of Health (DOH) released statements about exercising in these conditions.

“Outdoor smoke contains very small particles and gases, including carbon monoxide. These particles can get into your eyes and lungs where they can cause health problems,” they said.

The DOH also said to avoid exercising in these conditions especially when you have asthma or any kind of lung or heart problems. The smoke can cause eye, throat and nose irritation as well as wheezing, coughing, shortness of breath, and headache.

Even though athletes reported not being too affected by the smoke in the air, the layer of ash that was seen on cars and buildings was evidence that the air quality was unhealthy and justified cancelling outdoor practices.

So next time the smoke is out, limit outdoor activities and monitor air quality websites to stay healthy and feel your best.