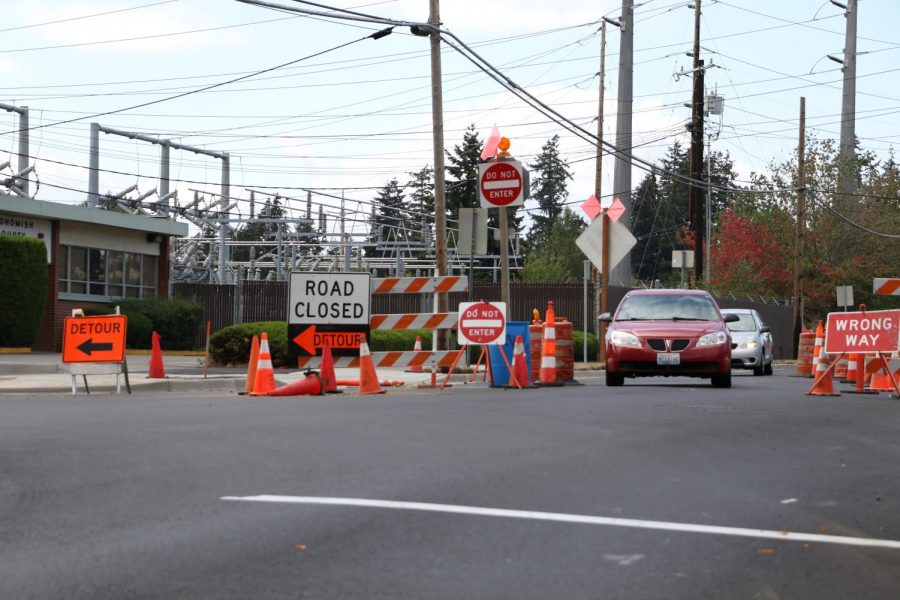 Multiple roads have been closed off for construction in the Lynnwood and Mountlake Terrace area since the summer of 2018 began. These roads may be closed completely, used as an alternating single lane or closed down for certain sections of time during the day. These simultaneous road closures have caused lots of traffic problems for many drivers, including the students and staff of MTHS and members of the community.

One of the larger road closures in the Lynnwood area is the Maple Road and Ash Way closure. This intersection was fully closed for construction on April 23, forcing drivers in the area to take alternate routes to their destination. It is scheduled to be finished sometime in November 2018, before holiday traffic arrives.

The City of Lynnwood, with funding from Snohomish County, hopes to alleviate frequent flooding during rainfall at the low-lying intersection by placing concrete slabs onto steel pipes inserted into the ground.

So far, the construction team has removed the existing pavement, set the steel and poured the concrete slabs.

However, the Maple Road closure has caused a large shift in traffic from this main road to other side roads and detours. Snohomish County tried to accommodate the confusion by creating a detour route, but with large volumes of traffic redirected to side streets, it will quickly cause an overabundance of cars in all directions.

This road closure negatively affects many students and drivers in the community, as it closes off a main road and clusters the side roads and alternate routes, making daily trips to and from school, or anywhere else, longer and more tiresome.

Other roads in the area are opened and closed for parts of the day. One of these types of closures is on Filbert Road, at the intersection of Larch Way and Filbert Road to the intersection of Filbert Road and Locust Way, a little ways away from Maple Road. This road closure began on July 9, 2018, and has been continuing since then, with no end date announced so far.
However, it isn’t all bad, as the road is only closed from 9 p.m. to 5 a.m.

By placing steel plates down over the work during the day, drivers can use the road during the day, and construction workers can work on the road at night. This time slot is important because this small section of the road is part of a detour for the Maple Road closure, so by opening the road during the day, they do not add to the traffic issue caused by Maple, and are still able to get their work done, step by step, without inconveniencing many drivers in the process, making this a good solution.

However, this still might create an issue for any drivers who go out late night and don’t return before 9 p.m. So, if you happen to go out late at night, either come back before 9 p.m., or find some other route home to avoid Filbert Road.

Overall, the city found a solution to work on the road and not trouble many citizens, except for those who travel out at night.

A little further south, a strip of Larch Way is closed between Cypress Way and 28th Ave W. This section of Larch Way has been closed since August 6th for construction and maintenance.
However, this street, unlike the two road closures mentioned before, has residential houses along it. Therefore, closing the street completely would block off people’s homes and anger many citizens, so the city came up with a solution.They made the street resident access only, meaning those who live in the houses along the street can enter, but it will not open out on the other side.

This closure isn’t too much of a hassle, since you can avoid it mostly by going through other side residential streets, but it might add a few minutes to your drive. However, they say they will finish the road work soon.

Another important road closure is on 212th St SW, between 61st Pl W and 63rd Ave W. This road closure is close to MTHS, and has affected both teachers and students on their way to school.

With the road closed, or occasionally used as a one-way road, drivers must either navigate one lane or take a detour. MTHS history teacher Michole Mattix said, “The [closure] on 212th probably adds at least 5-15 minutes in taking the one way or the detour.” Over the summer, she said, it was a “minor annoyance”, but with school starting up, the closure will begin to cause problems for her, and many other staff members at MTHS.

This road has been closed by the City of Mountlake Terrace for construction and repavement, but is believed to be finished soon, as the city updates their progress. After Labor Day weekend, on September 4th, the workers hope to add new road markings to the new asphalt. However, they aren’t certain they will do it by then, as the new asphalt must fully cure before adding markings, and the scheduling is difficult at this time of the year.

The team is well aware of the traffic impacts and will be flagging or directing cars through a single lane or around the road if it needs closing, as well as providing local access to the businesses.

In general, the community should try to avoid the road blockage and find another route, or go through the designated detour.
These road closures not only affect drivers in the community, but also the residents that live on or close to the closed sections. These closures limit the possible roads and create a single entrance and exit to these people’s homes, making daily travel annoying.

Despite the troubles these road closures may cause, for both residents and the community, they are used to improve the community and the roads.

“Even if the [closure] is a hassle, I still see it could potentially be a good thing down the road,” Mattix said.

I believe if we are able to deal with the closures to the best of our ability and wait for the construction to be finished, the roads and community will be better, and it will be a good thing in the end. These closures may be annoying now, but in the long term, they will help improve our road system and make travel more efficient. If we tolerate the annoyance, and work together to help avoid these closures, once they’re finished our roads and community will be improved.