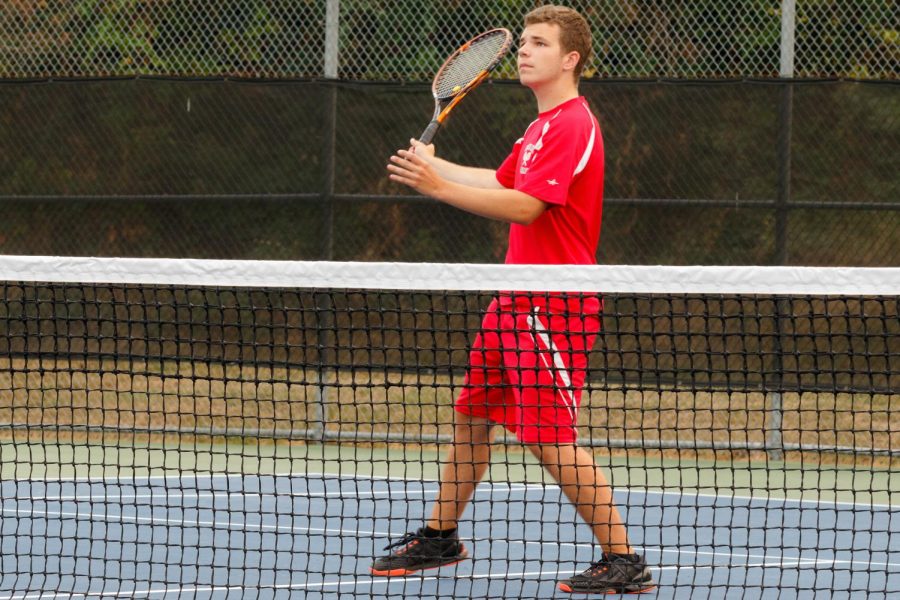 Senior Jake Peters keeps his eye on the ball at tennis practice on the MTHS tennis courts.

Senior Jacob Peters, who listens to Three Days Grace before his games, will be leaving a legacy in MTHS.

When Peters is graduating he will be missing the rivalries he’s made on the Terrace Tennis team. Peters started playing tennis when he was about 10 years old. His parents encouraged him greatly.

Peters favorite part throughout Tennis was the connections he made with others throughout the years and “when my teammates were cheering for me during a three hour match.”

The highlight of Peters four years was when he played a match against the best player in the district. Peters said, “I knew going into the match my chances of winning were slim, but I knew how to play him and where to expose his weak points.” Peters lost that match 5-7 and 3-6 but he was proud of how he played the game.

One of Peters’s conflicts was getting mono halfway through his junior year, which prevented him from completing the season. “It was disappointing because that was the best season Terrace had,” Peters commented.

At the very first practice Peters’s head coach Alberto Ramirez decided to put him in a singles match against the best seniors on the team at the time; Peters won both of the games which made him very proud of himself.

Before Peters serves the ball, he always bounces the ball three times on the ground with his hand and spins the racket to wish him luck.

After graduation, Peters will be attending The University of Portland and mastering in Mechanical Engineering. Peters will continue playing club tennis and other intramural sports throughout college.