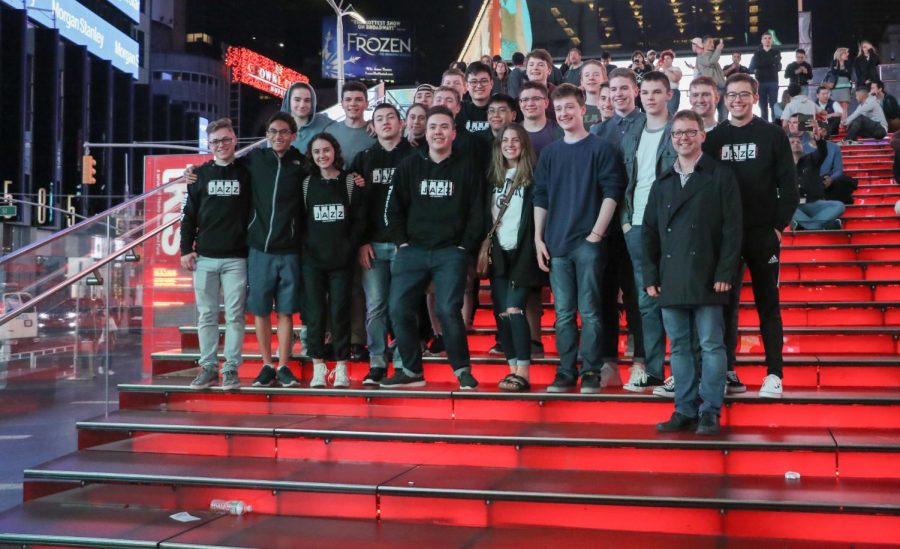 Jazz 1 poses for a group shot in Times Square the night of arriving in New York.

The judges for the 23rd annual Essentially Ellington Competition & Festival (Essentially Ellington) announced the top three performing bands on Saturday, May 12 in Rose Theater in Jazz at Lincoln Center. They named the top-placing bands to be Newark Academy (Livingston, N.J.), Dillard Center for the Arts (Fort Lauderdale, Fla.) and Tucson Jazz Institute (Tucson, Ariz.), in no particular order. These bands performed in the final concert on the same night.

At the final concert, the MTHS Jazz Ensemble 1 (Jazz 1) added two individual honors and a section honor to their name.

After all 15 participating high school jazz bands concluded their performances, they attended an autograph session with the members of the Jazz at Lincoln Center Orchestra (JLCO) while the judges deliberated. They then gathered in Rose Theater in anticipation of the final announcement.

The audience displayed a little humor by standing and applauding when the stage manager arrived to adjust the stage for the forthcoming judges. The judging panel consisted of Wynton Marsalis, Bill Charlap, Erica von Kleist, Jeff Hamilton and Todd Williams.

Hamilton, an acclaimed drummer, described the 15 acts as being part of the “highest level of bands across the board.” He felt overwhelmed and impressed by the caring, focus and dedication of the bands. “Everyone deserved to be here,” he said.

As an aluma of Essentially Ellington, von Kleist recognized the impact of the festival on students. She advised that students take their time when performing solos.

“Some of the most profound moments in your solos happened when you didn’t play,” she said. “Take a breath and let the music tell you what it needs.”

Williams, who has worked as a clinician with Jazz Ensemble 1 (Jazz 1) before, suggested that band directors “let go” and loosen their grip on their students to let them play freely.

Finally, Marsalis gave his comments and asked that the bands maintain positive sportsmanship after the reveal of the top three bands.

“The world is based on collaboration,” he said. “Don’t hate, congratulate.”

After the announcement, Newark Academy, Dillard Center for the Arts and Tucson Jazz Institute rehearsed for their performances at the final concert later that night.

All three top schools performed two songs each, with one featuring a solo from a member of JLCO. The Newark Academy jazz band, Chameleon, marked the beginning of the end to Essentially Ellington. They first performed “Chinoiserie” featuring JLCO member Elliot Mason on trombone. “Chinoiserie” highlighted the different assets of the band by including bass, piano, saxophone, guitar and drum solos.

Chameleon then featured student Samantha Powell as a vocalist for “I Ain’t Got Nothin’ But the Blues.” Powell supported her bandmates onstage and clapped after the guitar solo. Their set for the final concert was met with a standing ovation from the audience.

The Ellington Big Band of Tucson Jazz Institute tackled the stage next. Band director Doug Tidaback handed the microphone off to a pianist for her to give their thanks to supporters. They started off with “Cottontail”; however, the Ellington Big Band didn’t initially perform the song in their main Essentially Ellington performance.

“Cottontail” hardly had a moment without a solo, displaying the band’s versatility and skill with multiple instruments. As the saxophone section took the spotlight toward the end, the passive band members and the audience began to clap along with the rhythm.

Afterward, the Ellington Big Band invited JLCO member Chris Crenshaw to play trombone for “Royal Garden Blues.” They again showed their flexibility in performing when pianists Esme Martin and Jazmin Harvey exchange spots to pass off the piano. “Royal Garden Blues” changed up the vibe by incorporating a harmonica solo about halfway through the piece.

A trombone player took a solo and played off of Crenshaw’s solo as they alternated between each other at the front of the stage. Crenshaw then took charge of the solo and engaged the audience by prompting them to clap along again.

Lastly, DCA Jazz Ensemble 1 from Dillard Center for the Arts went onstage as the last of the finalists to perform. Band director Christopher Dorsey reintroduced “I Ain’t Got Nothin’ But the Blues,” which they performed in their regular set, but this time with their “own rendition” of the piece. Student Nadia Nicole Bailey added soul into the song by being the vocalist again.

As DCA Jazz Ensemble 1 transitioned into their second song, “A Night in Tunisia,” for the second time during the competition, Dorsey took the time to commend his band for being self-motivated.

“The more I back away, the more they start to do,” he said.

The entire band harmonized as Bailey led the vocals in the song’s introduction. They selected JLCO saxophonist Patrick Bartley as their special soloist; Bartley has a long history with Dorsey as they’ve known each other since Dorsey was in sixth grade.

Following a short intermission, JLCO performed a selection of pieces. Among those songs, they performed “Leap Froggin’” by Dillard junior trumpeter Summer Camargo, who won the Sixth Annual Essentially Ellington Dr. J. Douglas White Student Composition/Arranging Contest this year. To close the JLCO repertoire, the judges moved from the audience and onto the stage to perform “Take the A-Train” with JLCO.

After JLCO exited the stage, Marsalis stayed behind to announce awards for sections and individuals, which included honorable mentions and outstandings.

The rhythm section flaunted some awards as senior Sophie Parsons earned an honorable mention for bass and senior Gian Neri earned an outstanding for guitar.

Marsalis praised the band directors for playing a multitude of roles for their band members and for investing time and trust in them over time.

“You never forget your band director ever,” Marsalis said. “This is a labor of love.”

He called up all 15 band directors to recognize their outstanding efforts. When Marsalis announced band director Darin Faul, Jazz 1 led chants of his name as he walked up to the stage.

After the teachers made it onstage, the audience stood and clapped for a lengthy amount of time, causing Marsalis to joke about all of the applause and say that the band directors “deserve every second” of it. With humor, the audience stood up again to cheer on their directors.

Marsalis wrapped up Essentially Ellington by revealing the podium placing for the three top bands, along with two honorable mentions. Additionally, he named Camargo the recipient of The Ella Fitzgerald Outstanding Soloist Award.

The Essentially Ellington ranking of the top three high school jazz bands placed Tucson Jazz Institute at third, Newark Academy at second and Dillard Center for the Arts at first.