Jazz 1 reunites with clinician in preparation for Essentially Ellington 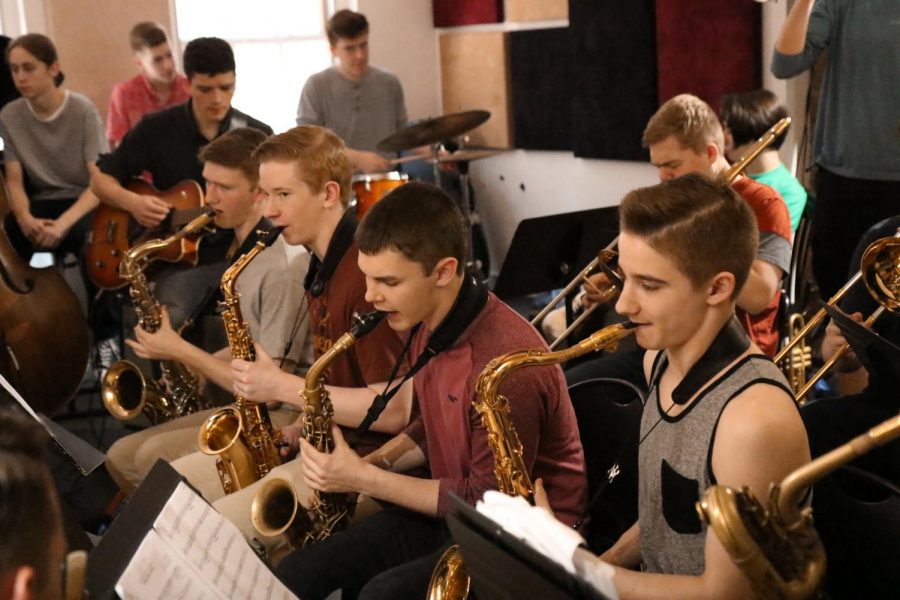 The saxophone section incorporates DiCioccio's advice to find more balance in their playing.

Jazz Ensemble 1 (Jazz 1) kept the “work hard, play hard” principle in mind for their New York trip before attending the Essentially Ellington Competition & Festival (Essentially Ellington) by attending a practice session in the free day before the event. Jazz 1 worked with professional jazz musician Justin DiCioccio for a clinic at Michiko Studios on Wednesday, May 9.

DiCioccio has mentored Jazz 1 in the past, giving him the ability to gauge the band’s success over time.

First and foremost, Jazz 1 warmed up and played their setlist slated for the Essentially Ellington competition. They started with “Harlem Airshaft” and made their way down the list with “Teri” and “Harlem Congo.”

Local bassist Andrew Hall, who lent the band his bass for the clinic, praised Jazz 1 shortly before leaving the room.

“I’ve never been so happy about the future of jazz as I am right now,” he said.

DiCioccio was pleased that the band incorporated his feedback from their last practice session earlier this year.

He offered some feedback and had the band play “Harlem Airshaft” again with more attention to minor details.

“Great programming, great choice of tunes because it shows all your strengths,” DiCioccio said.

He emphasized, “play[ing] as strong as you can without being crass.” Every so often, DiCioccio would extravagantly remind to band to wail their instruments and followed with an imitation of the sound their instruments should make.

For “Teri,” DiCioccio observed that the band could adjust their intonation. He recommended making the song feel dark, yet positive.

Jazz 1 ran through “Teri” a handful of times to achieve the desired tone. They practiced with only certain sections playing, then with the whole band with the exception of senior Gian Neri on guitar. Once they had the intonation balanced between light and dark, Jazz 1 introduced Neri into the practice.

After perfecting “Teri” through trial and error, DiCioccio comforted Jazz 1 by letting them know the many practices would pay off.

“If we weren’t picky like this, we’d still be in Seattle,” he said.

As Jazz 1 moved onto rehearsing their third song, DiCioccio asked the band to focus on their storytelling technique in their execution of “Harlem Congo.”

“You didn’t tell me that last night. What’d you say?” DiCioccio responded during Neri’s guitar solo.

He continued building up Jazz 1’s skill and energy as they continued to tweak “Harlem Congo.” DiCioccio told sophomore drummer Josh Setala that he doesn’t “have to keep playing the same patterns all the time” during his solo, so long as he keeps the spirit. Again, he reminded the band to go “back and forth, question and answer” with their musical communication.“Be proud of yourself,” DiCioccio told Jazz 1. “Nobody can play better than what you played today, so just go for it.”

The band members then split up with some people returning to their hotel and others practicing their solos. With that, DiCioccio sent Jazz 1 off with confidence for their Essentially Ellington performance later this week.