The Day of Silence. The day where thousands of members of the LGBTQ+ community and their allies come together in solace to represent the lost voices of our very own community. As Day of Silence starts, the pink triangles are passed out, pinned to our shirts and silencing our tongues. These pink triangles take us back to Auschwitz, the Nazi concentration camps of WWII. Homosexual males would have these badges placed upon them, to show why they were being held in the camps. The pink triangle would be joined by a yellow one if they were Jewish, creating that star we all know: the star of David. By the 1970s, the pink triangle was being used in gay rights protests across the country, and in 1975, Rocky Horror Picture Show, the “transvestite” (now a dated term, more accurately called a drag queen) character wears the pink triangle on their outfit, claiming the triangle for the LGBTQ+ community in the media. This pink triangle represents the struggle and growth the LGBTQ+ community has had, and will forever symbolize our strength and perseverance. In 1996, students at the University of Virginia organized the first Day of Silence in response to a class assignment on non-violent protests with over 150 students participating. In 1997, organizers took their effort national and nearly 100 colleges and universities participated. In 2001, GLSEN became the official organizational sponsor for the event. 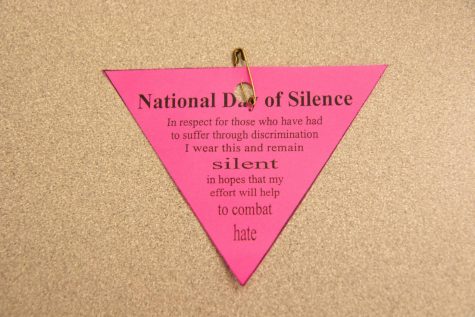 After receiving the pink triangle, the Day of Silence begins. Some become silent immediately, and some wait until school starts. As the day moves forward, participants experience questions or concerns, but are mostly met with kind nods and smiles. They school day continues as normal, but with the tacit understanding that this is a day of community, representation, and action. With this Day of Silence, contributors are representing the erasure and silencing that the LGBTQ+ youth have experienced in schools, demanding an action from their administration. Nearly 4 out of 5 LGBTQ+ students don’t see positive representation of their community in their curriculum, nearly 90% experience verbal harassment because of their sexuality or gender identity. Not only that, but almost a third skip school because of being uncomfortable or fear of bullying. These aren’t just statistics – this is reality within our school. Young gay boys are afraid of coming out because of the homophobia that streaks the walls red with hate. The LGBTQ+ youth of this school, this city, this state, this country, deserve representation within their school and that’s what Day of Silence is about.

The Day of Silence means a lot to the people of MTHS. It is not only LGBTQ+ members who participated, but allies as well. This day was an excellent way to feel the support around the LGBTQ+ community in Mountlake Terrace High School, as there were many teachers and students of all identities participating and showing verbal support. Not only does this day represent the LGBTQ+ community in a very real light, it shows how silence impacts everyone’s individual lives. There is great influence between teacher and student, as the student is here to tacitly remind them that the fight for injustice is not over, and that LGBTQ+ students still are being harassed, and still fear using their voice. This is a great influence from student to student – showing that standing up for what you believe in is a strong characteristic and something to be proud of.

The impact this Day of Silence has made over the years has been insurmountable, as it has shown schools across the world that the LGBTQ+ community will not disappear into the shadows, that they will rise and stand up for proper treatment and representation in every curriculum. See you next year on April 19th, 2019.