Word on the Street

these teachers are all write 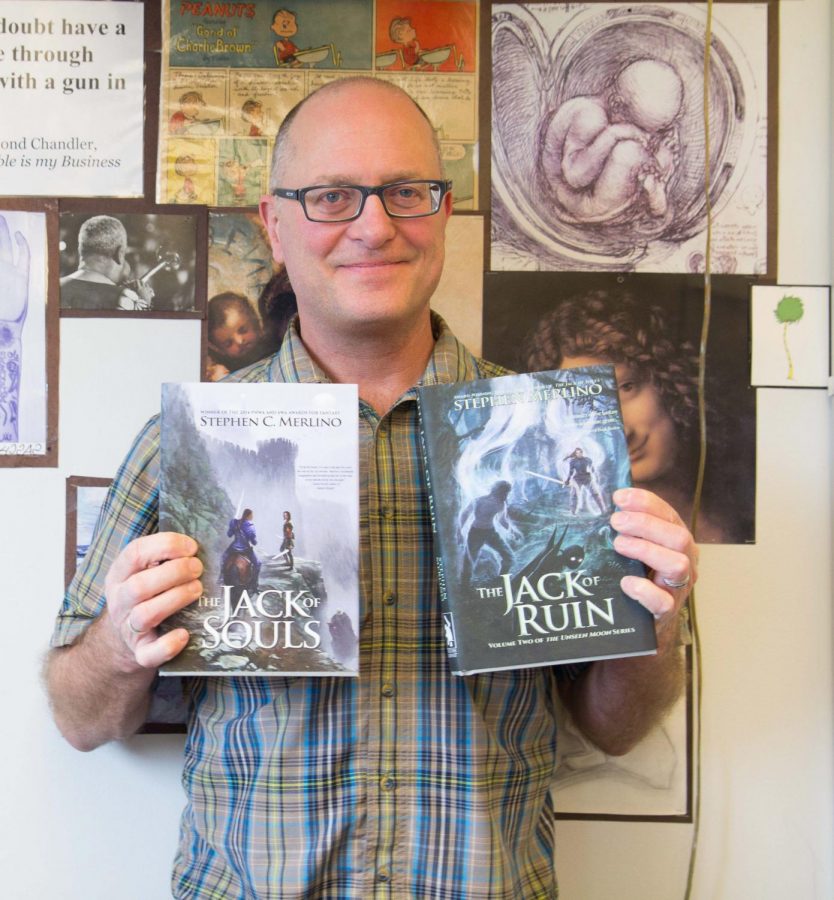 Not too many people, let alone teachers, can say they are writers. Currently, two MTHS English teachers are working on novels while also balancing their teaching careers and personal lives.
Job History
Junior history and english teacher Stephen Merlino is currently on his 17th year teaching at MTHS. Before that, he was a tour leader in Europe and an exhibition leader in Alaska, Mexico and parts of the Caribbean and the Columbia River.

“It was a wilderness cruise ship about 150 ft long and we would take small groups of people out and chase whales and go hiking and look at birds and stuff,” Merlino said. “It was like living on Discovery Channel.”

“I learned so many fascinating things about the history of the west and the settlement of the west and so much natural history,” Merlino said. “So much biology and just the weird beauty of nature. Things that are weirder than you can imagine and think up yourself helped me stimulate my imagination to create stories about fantasy worlds and fantasy history for worlds that I make.”

English teacher Peter White has been working at Mountlake Terrace High School since 1984. Needing to pay for college, White has worked being “everything from truck driver to old mill worker to commercial fisherman to choker setter logging.”

“I first started writing in high school, when I wrote games for my friends like Dungeons and Dragons games. I would make up worlds and scenarios and characters and things. Then of course I was an English major in college, so I took creative writing classes and I had professors that would let you write stories instead of essays sometimes,” Merlino said. “That’s where I really decided I wanted to try to get things published and be a writer.”

Later, Merlino came to the realization that writing was a job which is often done alongside another, more permanent, occupation.

“I didn’t realize at the time that it’s extremely hard to make a living as a writer,” Merlino said. “Most writers don’t just write; they have a day job. There’s like only 700 writers in the country that live on their one job that’s just writing. Everybody else is pretty much doing something else too. That was college when I really decided I wanted to try to write.”

Merlino also emphasized how his love of stories and words led him into seeking a writing career.

“I just love stories and I love words, so I guess I’m kind of wired that way just like some people are wired from math, which I’m not and things with math in it really stress me out,” Merlino said. ”Whereas writing and words are my natural language. It’s the way my brain works in any way, images, finding words to capture the images. That’s me. That’s the way for me to pursue those things.”

White had wrote on and off his whole life, but his writing really took off six or seven years ago.

“I always wanted to be a writer, ever since I was a kid,” White said.
Works in Progress
“I finished the first draft of something I’m calling Ghost Hunter,” White said. “Basically Ghost Hunter is about Jack Reacher meets Saw.”

White is currently writing a book based on his personal encounters with ghosts, a lot of that being from his time living in Thailand.

“I write pretty dark stuff on the average,” White said. “I’ve tried write a couple of teen pieces and I have one about a werewolf I like. I find it difficult, somehow, to pull this life into my writing life. I’m one of those people that have pretty sharp boundaries between things.”

White makes an effort to apply his writing into his teaching style. Specifically, his class has taken extractions from novels and plays and turned them into screenplays.

“My writing influences my teaching more because I have a pretty sharp eye for what makes good writing and how to analyze pieces and look at them and how to learn new tricks,” White said.

Merlino is currently writing another book in The Unseen Moon book series, the first book being The Jack of Souls.

“It’s the story of a young man who’s cursed to die on his nineteenth birthday and he has to figure out a way to break the curse. All the stories involve him finding a way to break the curse, but the solution is worse than what the curse was, and so now he has to deal with the solution that he’s committed himself to. Plus, he’s, of course, trying to save the world, like many fantasy novels,” Merlino said.

There is an element of realistic fiction in Merlino’s novels. Merlino’s inspiration for the series came from his love for Shakespeare’s time, the English Renaissance and for western American history, the wild west.

“I gave England a frontier and the frontier a native group, but instead of the natives like that were in our continent in real history, these natives are ready for the invaders and they’ve seen them coming. They figured out how to fight them, and so there’s threat of war always coming in the horizon,” Merlino said.

In The Unseen Moon series, the main character, Harric, tries to solve his problems and falls in love along the way with a female character, Caris, who is autistic. Both of them are attempting to solve their problems while trying to become who they want to be.

“She wants to be a knight, and they don’t let women do that where she’s from. Plus she has these other challenges, but those challenges give her gifts with horses, and knights need to work with horses, so she’s got super strong gifts but she’s also got struggles,” Merlino said.

Merlino explained how his teaching career and love for teaching English has aided him in his writing career, providing him with inspiration to keep writing novels.

“Part of my love for stories is teaching them the main characters in my stories, some of them are teenagers, so it helps to be around teenagers all the time to know what they do and think about and what’s important to them and what’s not and what makes them irritated and what doesn’t,” Merlino said. “So that helps a lot, the main characters being basically young adults. Otherwise, just getting to read and talk about history also helps stimulate my imagination, and I’m always learning something new when I’m teaching.”

Over his writing career, Merlino has been nominated for various awards. In 2014, The Jack of Souls won the Pacific Northwest Writers Association’s unpublished novel competition for the Science Fiction/Fantasy category. He has won a silver medal for the Independent Publisher’s Award. The prequel chapter of The Jack of Souls won 2016 L. Ron Hubbard Writers of the Future. The Unseen Moon’s second book, The Jack of Ruin, was voted into third place for cover of the month on allauthor.com. At this point in time, his first novel is free on Amazon for Kindles.
Juggling Act
Balancing a writing career and a teaching job can be a struggle. To deal with that struggle, it is important to be disciplined and organized.

White says he often struggles with sitting down and making himself write.

“I enjoy the creation more than the fine tuning that you need to do. So like the latest screenplay that I just submitted into a contest is the sixth draft. In order to be successful you generally have to revise multiple times. Novels take three drafts, at least, before they’re right, at least. And that’s always kind of a drudge compared to the creation process and just letting it flow.”

To maintain the balance of all of the things in his life, White maintains a strict schedule to ensure he is able to accomplish all of his goals for a day. He splits his time up for work, family, writing and exercise.

“I get up at 5 and I write every morning for an hour and that’s my writing time. If I get that done, I’m happy,” White said. “I have real sharp boundaries. I’m real careful with my time. Like when I’m here [MTHS], I’m here; I focus, and I’m able to focus really well while at school, and once I go home I pretty much put it out from my head and focus on my other stuff. I basically get through it by having real sharp boundaries. ”

Merlino also agrees scheduling is very important when balancing work with personal life. In response, he tries to stick to a schedule, but it is challenging for him to make time for both writing and exercise.

“It took me three years just to write the second book and that’s just getting a couple hours after work, going away for days on the weekend, not being with my family during those times, which makes it harder on my wife,” Merlino said.

Another struggle, according to Merlino, is time.

“It’s the time and balancing it with family. That’s the sad thing about needing to have a day job. I would love to work just a couple hours a day and teach two classes, but I couldn’t feed my family that way. The time is the biggest struggle, just finding the time to write. It can be done, and I think you just have to be disciplined,” Merlino said. “I have to be organized and disciplined.”
Advice
White advises other authors to schedule a time and write, whether there’s inspiration or not.

“Set a time, sit down, and make yourself write everyday at that time and it will just come, even if you sit down and start writing and you don’t know what to write about, but maybe this will be cool, and you start writing off and sooner or later you just kind of do and then sit down and do it.”

Merlino also had advice for new writers, telling them to not worry about the order in which they begin to tell their stories.

“Just write a scene and the rest will come. The very first thing I ever wrote was a kids’ novel that I never published. But I saw the middle of that first, and I wrote a scene which I thought was awesome, and then I sat back and thought ‘who is this kid’ and ‘how did he get in this situation’ and then I worked back from there and I saw other adventures he had and I wrote those and they all just came together like beads on a string,” said Merlino.

He also advises others not to focus on quality of the work.

“Don’t worry about if it’s good enough,” Merlino said. “Don’t let that stop you from writing because the first draft is always crap.