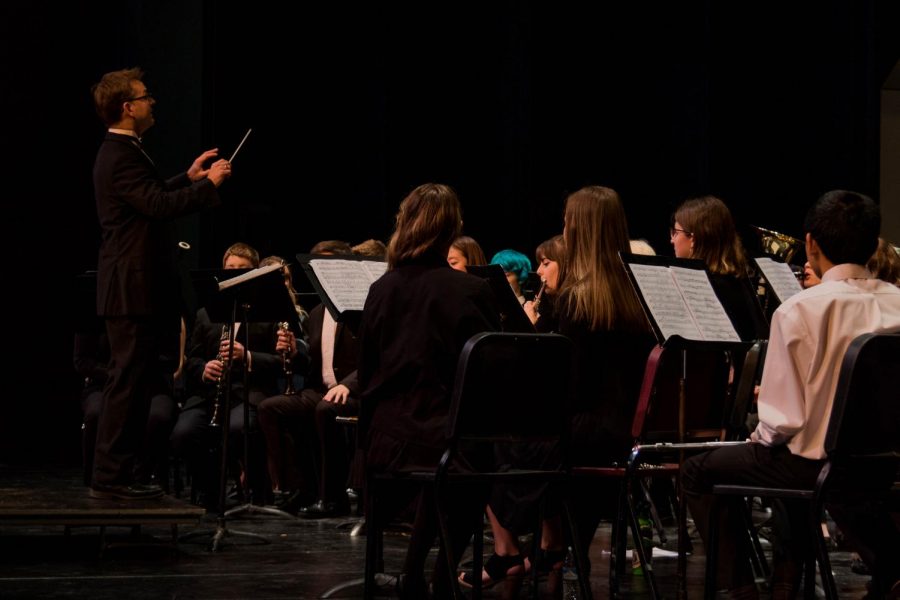 Chamber Winds juxtaposed Tchaikovsky’s romantic take of “The Nutcracker” with Jazz Ensemble 1 (Jazz 1) playing Duke Ellington’s modern jazz reinvention of the ballet’s soundtrack on Thursday, Dec. 14. While band director Darin Faul said he had no plans to hold the biennial Nutcracker concert this year, his students insisted they preserve the tradition.

The concert band started off with renowned holiday carols and ended with a medley of holiday tunes, called “Holiday Spectacular.” Faul called it typical for a band to perform a similar piece during this wonderful time of the year and encouraged the audience to guess how many different songs were hidden in this closing performance.

In a whirlwind, the bands arranged themselves to display Chamber Winds front and center with Jazz 1 set up behind them on a raised platform. Faul initially wanted them directly side by side but the stage parameters prevented it, leading the ensembles to create this arrangement without Faul’s direction.

Freshman year, I felt like I couldn’t play anything within the music and now this year my confidence has grown so much more.”

The players weren’t alone in becoming more organic with this concert. Faul’s first experience hosting the Nutcracker concert was filled with him giving hefty descriptions of every piece. During the next rendition, an announcer joked about Faul’s heavy commentary. Faul went on to speak about each song unscripted—”We’re flying free,” he said.

“This is sort of where the whole thing comes together,” Faul said.

They began alternating between both bands, each performing their respective versions of Nutcracker songs. Junior Erica Lampers, performing in the Nutcracker concert for her second time, said contrasting the styles of Tchaikovsky and Ellington helped emphasize certain elements of both types of music.

“The Tchaikovsky version has been around for hundreds of years and just to add a little bit of a twist to it is something that is a little complex to some people. But once you listen to it kind of developing, you see certain parts that are attributed in Tchaikovsky’s version and how they are shown in Ellington’s version and how they’re featured within both,” she said.

Faul explained the plot progression of “The Nutcracker” throughout the concert, noting that he was being “self-conscious” about his word choice because one of his daughters will be participating in her own Nutcracker play.

To align with this dance scene in the ballet, Chamber Winds performed “The March.” During his narration, Faul mixed up the Land of Sweets in “The Nutcracker,” instead referring to it as Candyland. Ellington recreated the song as “Peanut Butter Brigade,” which adds a refreshing jazz twist to the repetition of the original.

“Dance of the Sugar Plum Fairy” featured sophomore Steven Yang on the celeste, which is owned by the Edmonds School District and was picked up from another school specifically for this performance.

Faul described Ellington’s aptly named “Sugar Rum Cherry” version as being a “party scene.” He set the mood by leading the audience to imagine an office Christmas party where someone drinks too much and begins to seductively dance, making others uncomfortable. This “drunken dancer” was none other than junior Ben Leonard, who had a solo in the song, which junior Kieran Faris opened on drums.

Both bands took an intermission and returned to play two songs each. Chamber Winds performed “Arabian Dance,” which prompted Faul to recognize the only English horn and bassoon players onstage. He mentioned he wishes he “could’ve met Duke Ellington at some point,” as he introduced “Arabesque Cookie” for Jazz 1.

Next, “Chinese Dance” featured the flutes and piccolos in Chamber Winds. Faul said Ellington’s “Chinoiserie” instead featured clarinet and tenor sax, and assigned a different tone to the song, adding “comedic parts” to it. However, the comedic part was most apparent before they even began playing.

The trumpet section of Jazz 1 turned their backs to the crowd, jokingly protesting the tacet of the song. Tacet, Faul explained to the audience, is when an instrument is not played during a song. He asked Chamber Winds to raise their hands if they were tacet during “Chinese Dance” versus in “Overture,” showing that this piece involved fewer players.

Flutes took charge once again in “Dance of the Toy Pipes” with the brass helping them out while they rested. The bands transitioned to Jazz 1 with “Toot Toot Tootie Toot,” which had more jazz elements and a swing groove sound.

Yang began the eight-minute-long “Waltz of the Flowers” on piano, guiding the rest of Chamber Winds into joining in. The elegance of the piece reflected its accompanying scene in the ballet, which spotlights around 16 dancers.

Jazz 1 performed its counterpart, “Danse of the Floreadores.” The song ended suddenly, carrying out a long, ominous silence at the end. Following the cheers, Chamber Winds exited the stage while Jazz 1 sent them off with one last piece.

Lampers played a prominent role in the concert due to being one of the lead flutes and piccolos. The biggest difference between this year’s Nutcracker and her first was the progression of her skill.

“As a freshman, I watched three older flutes play that and then tonight it was like I’m the one playing it so it was super sentimental,” she said. “It was just different because me as a freshman playing the Nutcracker, it’s weird hearing friends who are in the same grade as you playing those same parts that you listened to seniors playing.”

Lampers said she felt the band’s preparation served them well in setting up the concert for a night of strong performances.

“The ‘Overture’ went really well tonight. It’s something we practiced a lot and we’ve always had issues of it rushing or people being off. I feel like tonight we kind of just killed it and started off the concert with kind of a bang,” Lampers said.

Across the two years since she last performed this repertoire, Lampers recognized the changes made in the delivery of the music while still retaining the classic vibe of the ballet.

Her improvement in band is marked by her increasing familiarity with the music as a result of practicing her craft.

“It was almost like a repeat but seeing the notes I couldn’t play in the beginning and then how I could play them later on. It’s just weird because freshman year, I felt like I couldn’t play anything within the music and now this year my confidence has grown so much more,” Lampers said. “It’s interesting to see how much you’ve grown as a person and as a player.”

She hopes to inspire the Hawkeye staff to realize their full potential so every member can find their niche. This year, she aims to expand her journalistic ability by capturing diverse perspectives and presenting them through audio. In her free time, Annika enjoys taking care of plants and is the co-president of Eco Club.